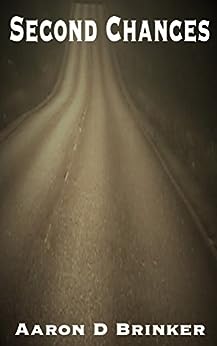 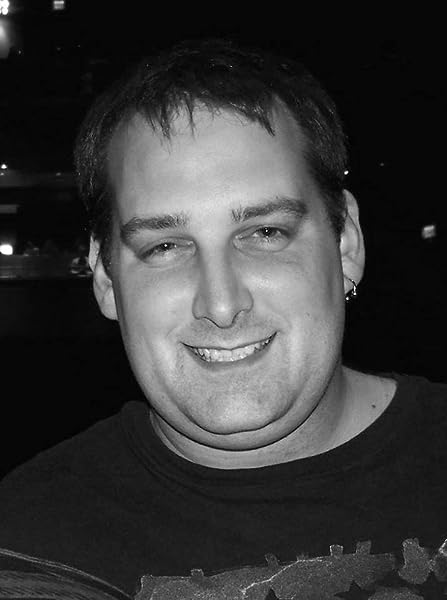 Travis B
5.0 out of 5 stars The eyes turned black and… Do 6-month-old babies sit up like that? Paranormal jolts & smacks abound!
Reviewed in the United States on January 25, 2019
Verified Purchase
The eyes turned black and… Do six-month-old babies sit up like that? I do not believe so! Second Chances, by Aaron D. Brinker, was a paranormal, spooky and freaky trip I thought I saw coming. But the ending, or should I say endings, said otherwise! Especially the epilogue; it literally had me laughing out loud—and had the judge dancing naked, and, and, and what!? People actually getting along with…
Don’t dive into Aaron’s novel expecting gore, but do expect the unexpected. There’s a freak tragedy, then some pain. Then weird stuff, things moving around or floating in midair, hairs getting pulled out here and there and a few almost lethal claw marks and then, the reeeeally weird stuff.
I found this to be a fast, fun read and chose it because the plot sounded cool. I mean, who doesn’t love to get “Second Chances.” Especially after THAT, and what Chaun (a name I couldn’t, in my mind, pronounce as Sean or Shawn, even after reading the entire story) had endured and then had to live with.
Yep, the beginning got right to it, starting out pretty terrible. And I’m not talking about the writing, but what happened! Who knew it’s better to crash into a parked car while going 35 mph instead of 30? You’ll get why when you read it. And who knew, whatever in the world was going to happen, and then did because of such a “chance” happening, a should-have, would-have, but ultimately a nothing that could-have been done! And from there goes layer upon layer of paranormal peculiarities. Think of the movie Paranormal Activity, but no sneaking around with the paranormal part. It comes straight at you, and not so much in tension building waves, but in dynamically crescendoing smacks and jolts. And when… (one of my favorite parts) …when Jake turned around to see it, then fainted (feinted) head first into the table, I knew this was gonna be good. And it was.
And I skipped some things I should have been doing: chores, cleaning, eating, sleeping, breathing, and finished reading Second Chances in less than two days. It’s not a long read anyhoot, but it is a good one. Enjoy!

Donan Berg
4.0 out of 5 stars Promising
Reviewed in the United States on April 20, 2020
Verified Purchase
Oftentimes I will, as an author, read genres I don't write. When blessed by Author Aaron Brinker to be the subject of an interview he sponsored, I undertook to examine his novel offerings. Without his encouragement I purchased his "Second Chances." After the first forty pages I realized I couldn't give it five stars because of its passive writing style. When that continued, I struggled with a four-star award. At first, vanity reared it's ugly head in that he'd not purchased, or read, any novel of mine. My better self convinced me vanity provided no valid judgment scale.
Nonetheless, I struggled with the underpinnings of paranormal, which I assume regular readers of this genre do not. Not being adverse to "second chances" in real life, the plot strikes a chord for that which we all wish for, and a result we trust, all doubts aside, is earned by true striving and honest work. While I hesitate to recommend "Second Chances" as a literary triumph, it's good reading, if not otherwise recently reviewed. Aaron deserves kudos. His name is on my "check-back" list for I expect ever greater writing.
Read more
Helpful
Report abuse

D.L. Finn
4.0 out of 5 stars Anger, an accident and that outcome of that.
Reviewed in the United States on November 20, 2018
Verified Purchase
“Second Chance” is a story of anger, an accident, and the outcome of that. Guilt and having to go on is Chaun’s life now after a car accident but, strange things begin to happen around him. While his family deliberated on this strange situation, I found myself rooting for a good outcome to the circumstances that would have had me running for the hills. This book offers a new chance at life, along with the paranormal that is determined to ruin that. There is also relationships, family and forgiveness. The story had a very journal-like feel to it and I was surprised how long the family took to get to that aha-moment, but it was a unique tale with a refreshing result I didn’t see coming. As a bonus there was a hockey game included and I’m a big fan. This story is a reminder to “think before you speak” because in life you never know how fast things can change.
Read more
Helpful
Report abuse

Ihtis
4.0 out of 5 stars The horror story about incompatible couple
Reviewed in the United States on September 29, 2019
Verified Purchase
Katrina and Chaun were not compatible. Their energies did not match and this is a subject of this light horror story. Chaun is kind of mama's son and she is a harpy. After the accident, the entity will seek an act of revenge, even Chaun is a victim. I like this horror because it is not a typical story with blood, vampires, or meaningless screaming. This is a deeply psychological story that will not make anyone indifferent. It is up to the readers and picks the side, who is the main culprit there, Chaun who was a phlegmatic character, or Katrina who was an egocentric control freak. The author carefully describes characters and make their role in this story with a good point. The feeling of fear and tense is in the whole book because of this it belongs to the horror genre with a psychological note.
Read more
Helpful
Report abuse

Zane Summerfield
5.0 out of 5 stars A truly outstanding, captivating book, highly recommended.
Reviewed in the United States on June 27, 2018
Verified Purchase
Second Chances is a superb story with a great telling style. It had some humor in it amongst the paranormal. It is a very engaging story and it has your mind thinking about it, even when you are finished reading you are still thinking about it. That says a lot about the author.

What I found fascinating is the authors ability to express this story with truth and grip the reader with as much feeling as one can possibly have. A very compelling story that will enlighten you as it has me.

I don’t like to give spoilers away so I am going to refrain from describing parts of this book. I will say that it was enjoyable, very much and I’ll be keen to read this author’s other books. I like his style of writing and his ability to develop believable characters that make the story POP!
Read more
Helpful
Report abuse
See all reviews

Maria's Mum
5.0 out of 5 stars A gripping, supernatural tale
Reviewed in the United Kingdom on December 21, 2018
Verified Purchase
Chaun Hutchins seemingly lives an ordinary life and we find him opening up to best friend Jake about how sick he is of how his wife, Katrina has been treating him. Brushing her behaviour off as merely ‘crazy hormones’ due to her being eight months pregnant, it’s clear as the story unfolds that Chaun is a victim of verbalised domestic abuse. Katrina's demanding behaviour at Jake’s party irks Chaun further and on the long drive home, with Katrina knowing exactly which buttons to push, does unfortunately end in dire consequences – but not before Chaun finally releases the pent up emotions that have troubled him for so long.

What follows is an incredible tale of revenge, hatred, hope, forgiveness and new beginnings. Whatever you believe, author Aaron D Brinker has created a gripping supernatural tale which at times will have you gasping out loud and for this reason rightly deserves a five star rating.
Read more
Report abuse

JM Baldwin
4.0 out of 5 stars An engrossing read!
Reviewed in the United Kingdom on June 3, 2018
Verified Purchase
I found this book to be an engrossing read. The tragic precipitating event and the resultant difficult emotions pulled me straight in. The characters were likeable and engaging. When things took a darker turn it was very chilling as things escalated. I really enjoyed it and would read more by this author.
Read more
Report abuse

Anthea
5.0 out of 5 stars A riveting, haunting, heartfelt story.
Reviewed in Australia on December 4, 2019
Verified Purchase
Second Chances is an intriguing read that delves into the paranormal. I rarely read books in this genre but I was pleasantly surprised by the human emotions and the exploration of the dysfunctional relationship between the protagonist and his wife. Chaun is mistreated by his narcissistic wife who is expecting their child. We are introduced to the couple from the onset; we see how Katrina plays the victim in front of her friend, complaining about how her husband is unresponsive and distant with her. The narcissism here is so real; so many times the real victim who is yelled at and ridiculed by the narcissist ends up looking like the aggressor or as the reason the relationship is suffering. The author touches on this theme so well, and shines a light on how miserable a person can feel when subjected to the ill treatment of a narcissist. The victim fades away, and loses the light in their eyes and in their heart; they’re always walking around on egg shells, appeasing the narcissist to the point that he or she loses their identity. This is where we find the protagonist Chaun: at a party, despondently examining his married life.

On a brighter note, the author also shows us real, healthy relationships; Chaun’s parents display reciprocal love and respect for each other. I found that as a reader, I was hoping Chaun too someday finds a love like this; one that nurtures instead of debilitates, one that brings Chaun’s true self out to the surface.

The novel immediately takes the reader into the action when the unthinkable happens and Chaun is left with serious decisions to make. Luckily for him, his parents are right by his side. Will Chaun’s life change for the better or will something worse threaten his life and cause him to keep living on egg shells, and live a loveless life full of trepidation.

Second Chances is a thought-provoking, haunting, paranormal suspense story which also addresses real human emotions. The author is obviously very well-versed with the complexities of relationships. I thoroughly enjoyed reading this book.
Read more
Report abuse
See all reviews
Back to top
Get to Know Us
Make Money with Us
Amazon Payment Products
Let Us Help You
EnglishChoose a language for shopping. United StatesChoose a country/region for shopping.
© 1996-2021, Amazon.com, Inc. or its affiliates