You've subscribed to Blood at First Sight Series! We will preorder your items within 24 hours of when they become available. When new books are released, we'll charge your default payment method for the lowest price available during the pre-order period.
Update your device or payment method, cancel individual pre-orders or your subscription at
Your Memberships & Subscriptions
There was an error. We were unable to process your subscription due to an error. Please refresh and try again. 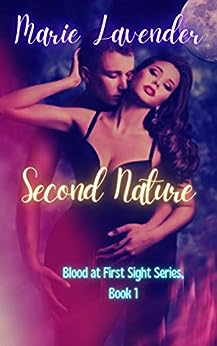 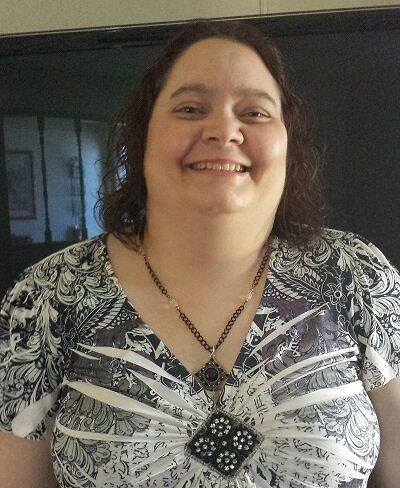 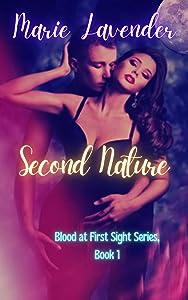 B
5.0 out of 5 stars Classic Vamp-Rom That Does Not Leave You Disappointed
Reviewed in the United States on May 17, 2015
Verified Purchase
Second Nature is everything a vampire romance should be...a strong human female, a tortured and extraordinarily handsome vampire, and an inexplicable connection between the two that almost doesn't happen, but thankfully does.

Despite their obvious species difference, vampire and human, Alec and Desiree are drawn to each other. There's just something about Desiree Edwards that drives Alec mad....in the good sort of way. Her blood calls to him, her scent drives him wild. Why does this human affect him so? He must find out more about this woman. In a moment of weakness, Alec takes Desiree's blood without her consent and gets more than he bargained for.

Desiree has always felt like an outsider looking in. With a failed marriage in the not so distant past, she has committed herself to her work. However, when Alec abducts her, she finds out that she is more than ready to move on...she's just not so sure she can accept it.

Marie Lavender is quite skilled at utilizing all the tools available for a hot adult romance- good plot, great characters...ahem...steamy sex scenes! This first installment is a great foundation for more stories to come. Though we learn a lot about our two main characters, Ms. Lavender leaves us with opportunities to learn so much more. The characters have good dialogue and their personalities go well together. The writing is solid. The pace is great. There is never a lull in the story.

I look forward to future books in this series.
Read more
One person found this helpful
Helpful
Report abuse

?wazithinkin
5.0 out of 5 stars Second Nature (Blood At First Sight Book 1) by Marie Lavender
Reviewed in the United States on June 7, 2015
Verified Purchase
Second Nature as an urban fantasy set in a contemporary world much like our own, with the exception of vampires, werewolves, and possibly other creatures we have yet to be introduced to. Desiree is a young divorcee who has immersed herself in her work to start a new life since the divorce. She has friends and family close by but is starting to feel like she needs a change of pace in her life or work. She hasn't decided which yet.

The story is told expertly through alternating viewpoints so well that I was never confused about whose head we were in. Alec is a vampire, he lost his life from a sloppy vampire who changed him unknowingly on a battle field during the Civil War. So Alex was on his own, without a sire, to show him the ropes on how to be a proper vampire. This turns out well for Alec in the long run. He has made a good life, or unlife, for himself and has been quite successful. He doesn't kill when he feeds, he erases his victim's memory of the event and sends them on their way.

When Alec spots Desiree at the annual Jazz and Blues Festival he is mesmerized by her. Not only does she attract the vampire in him, she also attracts the man himself. There is an attraction between Desiree and Alec that neither one of them can deny, no matter how hard Desiree tries to deny it. There is also a bond that neither one of them can explain. Desiree has some kind of psychic connection that Alec has never experienced before with anyone else. This makes the story unique for me. The emotional turmoil that each character experiences is something I appreciated and it drew me into the story. I cared what happened to both of them.

There are a couple of plot twists that kept the story engaging. One I felt was coming, it needed to happen, it was tense and hard to read. However, I am glad it concluded the way that it did. Even though this is book one of a series, there is no cliffhanger. That made me happy. I look forward to more from Desiree and Alec, this story could go so many directions. Great job, Ms. Lavender.

FYI: This book has sexually explicit scenes that may be unsuitable for some readers.

Format/Typo Issues: I found a small number of errors.
**Originally written for "Books and Pals" book blog. May have received a free review copy.** May 30, 2015
Read more
One person found this helpful
Helpful
Report abuse

Amy's Bookshelf Reviews
4.0 out of 5 stars Something magical about an undead romance
Reviewed in the United States on July 11, 2018
Verified Purchase
It's obviously not a typical romance, nor is it typical about an undead ravenous vampire story. The vampire is Alec, and the human he desires is Desiree. I am a big fan of Lavender's work, so this was something I definitely wanted to read. A start of something new, and very intense and filled with grand vibrant characters. The story builds so much the reader can feel the intensity of the chemistry between the vampire and his "captive." I really enjoyed this story, and how Lavendar can spin a great tale of romance, even with the undead. It felt almost real. As Desiree says to Alec, “I can see inside of you, Alec. I know your heart. I swear I’ll keep that heart safe as long as I live.” It's quite an undead story.
Read more
Helpful
Report abuse

Karen Massari
5.0 out of 5 stars A bittersweet romance, beautifully written.
Reviewed in the United States on June 12, 2016
Verified Purchase
Alec is a powerful vampire who is drawn to Desiree, a beautiful independent young woman. She is not yet fully aware of her special powers. The author is tender and empathic in describing how their love blossoms and how they gather strength to face challenges. A must-read! And it's a series!
Read more
One person found this helpful
Helpful
Report abuse

BarbarinaS
3.0 out of 5 stars A very nice read!
Reviewed in the United States on March 12, 2016
Verified Purchase
The author of this knows how to create characters that draw you into their emotions. Alec in particular is such a torn being and his life as a vampire has confused him to the point where we hope Desiree will be his salvation. It has a certain something that makes a connection, predictable romance with a little depth.
Read more
One person found this helpful
Helpful
Report abuse

Azia
5.0 out of 5 stars One of the Best Vampire Romances I have read
Reviewed in the United States on March 14, 2015
Verified Purchase
One of the Best Vampire Romances I have read! I really enjoyed reading this book. Very well written and easy to read. This book is on my "favorites" book shelf... to be treasured! This story has it all...and best part is the happy ending. Left me wanting to read more about these two, and their future adventures together. So looking forward to reading many more stories by this author! If you are looking for a great Vampire romance... I Highly recommend this book!
Read more
One person found this helpful
Helpful
Report abuse

Pamela
5.0 out of 5 stars Great read
Reviewed in the United States on December 6, 2016
Verified Purchase
Really a fun read! It's a paranormal / vampire book....I have learned to like this type. Excitement, intensity, well-created characters, love, fun.....Very enjoyable! I'm looking forward to Book 2 in this series!
Read more
Helpful
Report abuse
See all reviews
Back to top
Get to Know Us
Make Money with Us
Amazon Payment Products
Let Us Help You
EnglishChoose a language for shopping. United StatesChoose a country/region for shopping.
© 1996-2021, Amazon.com, Inc. or its affiliates