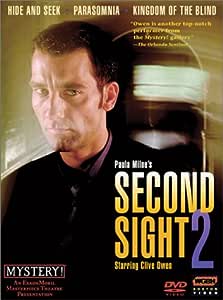 Inspector Ross Tanner must solve three mysteries, before his colleagues solve his. Clive Owen (Gosford Park) returns as Detective Chief Inspector Ross Tanner in three new cases of Second Sight. Afflicted with a rare and incurable eye disease, Tanner's vision is slowly dimming, yet his crime-solving senses are as sharp as ever. He's just been chosen to head the Special Murder Unit, an elite group assigned only the toughest cases. Tanner must hone his observation skills while staying several steps ahead of his colleagueswho are unaware of his debilitating secret.

Hide and Seek Tanners increasingly intimate relationship with Detective Inspector Tully (Claire Skinner) is put to the test as they attempt to unravel the brutal murder of a renowned violinist. Tanner must devise some unorthodox strategies to reveal what his eyes cant show him.

Parasomnia The daughter of a powerful lord wakes up covered in blood. Then her fiancé is discovered bludgeoned to death in his own apartment. As Tanner gropes for clues in the night, his new deputy Jack Boyd (Mark Bazeley) suspects him of alcoholism, and wants him tossed from the unit.

Kingdom of the Blind Tanner is caught in the middle of a war between black youths and neo-Nazis. While investigating the murder of a young activist, Tanner's son disappearsnow the case is personal.

Second Sight 2 follows the critically acclaimed, highly popular miniseries Second Sight--a co-production of BBC1 and WGBH (via the latter's Mystery! program on PBS)--with three bracing, two-part thrillers challenging ordinary notions of perception and deduction. Clive Owen returns as Chief Inspector Ross Tanner, whose eyesight is failing (his doctor sounds less certain this time that Tanner will absolutely go blind), subjecting him to blurry, distorting vision and even occasional hallucinations. Unwilling to give up his job, Tanner continues to rely upon confidantes working under him in his Special Murder Unit (now called the "Special Money Unit," investigating cold crimes and unusual cases), particularly Catherine Tully (Claire Skinner), who became Tanner's "eyes" in Second Sight and is his lover in the first story here, "Hide and Seek."

Created and written by Paula Milne, Second Sight was most interesting as a study of a man who can no longer use his eyes to solve crimes and must turn to a kind of sixth sense, heightened intuition, instead. Second Sight 2 extends that idea into chilling storylines in which only Tanner can "see" what his colleagues merely look upon. "Hide and Seek" is a strong and tragic tale in which Tanner re-opens an investigation into the apparent murder of a world-class violinist. While the SMU team pokes through three possible murder scenarios, Tanner takes the extraordinary measure of building a mock-up of the victim's home within police headquarters. (Meanwhile, Catherine endures the humiliation of being found out as Tanner's secret girlfriend.) "Parasomnia" is an absolutely spooky story about a sleepwalker (who fascinates Tanner on several levels) who has no memory of crossing town in her nightdress and bashing in her fiancé's head. Finally, "The Kingdom of the Blind" finds Tanner's young son missing during an investigation into the racially charged killing of an activist. Through all of these, Owen's laser-focused, powerful performance is something special to behold. --Tom Keogh

Happy CookerTop Contributor: Pets
4.0 out of 5 stars Well done!
Reviewed in the United States on June 28, 2016
Verified Purchase
We enjoy British mysteries/crime and searched the site looking for more to view and came upon this one. I didn't know there was a first season, figured the Second Sight 2 was the name of the series. Didn't care much for the first episode but buy the 2nd & 3rd we were "hooked". Beautiful ending, on an upbeat note. Not seen Clive Owen's work before. Ordered Season 1 which should be arriving any day.
Read more
Helpful
Comment Report abuse

KHI
4.0 out of 5 stars Delivers exactly what it promises
Reviewed in the United States on November 14, 2014
Verified Purchase
i just watched this again as I saw it when it first came out and it still holds up. Good plot, dialogue, compelling performances and stories. Complicated enough to keep you spinning, but not too far fetch in terms of twists and turns to turn you off. Bleak and fun and has a very satisfying ending to the whole series.
Read more
Helpful
Comment Report abuse

S. Demizu
5.0 out of 5 stars Couldn't be better!
Reviewed in the United States on July 3, 2004
Verified Purchase
As a non-native English speaker I knew I would have a hard time understanding the subtle parts of the mystery without my native language subtitles. But I, for being a big Clive Owen fan, couldn't resist. Now I'm happy I did the right thing. It's worth watching Second Sight 1&2 series again and again. I liked Owen's performances in "Greenfingers" and "Close My Eyes". This role of his, Detective Chief Inspector Ross Tanner, exceeds them by far.
Each plot of the episode is excellent. What I was so intrigued with was, however, how he faces his problem, going blind. Please watch carefully from Episode 1 to 4 in order.(notes: Episode 1 is Second Sight 1, a little longer than the other three.) You'll see how his eyesight changes from "visually impaired" to "almost blind" and his emotions from struggle and confusion to living finally with the fact. DCI Tanner is not a classical hero of hard-boild story, yet he has the same guts and loneliness, with dignity, at the bottom of his heart. Very cool!

a ellis
4.0 out of 5 stars Four Stars
Reviewed in the United States on March 2, 2018
Verified Purchase
I am very happy with this item.
Read more
Helpful
Comment Report abuse

farmgirl
5.0 out of 5 stars Second Sight 2
Reviewed in the United States on February 19, 2013
Verified Purchase
Love Clive Owen. I wish they would have continued this series. His insight, no pun intended, is clear and crisp. He can "see" what is happening or what has happened better than his collegues who have good vision.
Read more
Helpful
Comment Report abuse
See all reviews

cat love
5.0 out of 5 stars Great Mystery
Reviewed in Canada on August 5, 2016
Verified Purchase
This is such a good series, totally enjoyed it. Had to watch it the day it arrived.
Read more
Report abuse
See all reviews
Pages with related products. See and discover other items: hide and seek