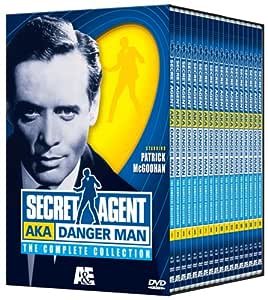 Secure transaction
Your transaction is secure
We work hard to protect your security and privacy. Our payment security system encrypts your information during transmission. We don’t share your credit card details with third-party sellers, and we don’t sell your information to others. Learn more
Details
Ships from
Amazon
Sold by
Odd Bookworm
Secret Agent (aka Danger ... has been added to your Cart
New & Used (16) from
$51.49 + $2.99 shipping

Now, all 86 episodes from John Drakes entire crime-solving career are available together on DVD. Each episode of this exciting spy thriller is presented in the original broadcast order, from the original season that aired only in the U.K. as Danger Man to the 47 episodes of Secret Agent that were seen internationally, including the two color episodes that provided a vivid finale to the long-running suspense thriller.

4.7 out of 5 stars
4.7 out of 5
303 global ratings
How are ratings calculated?
To calculate the overall star rating and percentage breakdown by star, we don’t use a simple average. Instead, our system considers things like how recent a review is and if the reviewer bought the item on Amazon. It also analyzes reviews to verify trustworthiness.

S. J. Volk
5.0 out of 5 stars THE GREAT McGOOHAN PATRICK,,, NOT JUST A GUMSHOE WITH A HAT TRICK!!!
Reviewed in the United States on February 8, 2018
Verified Purchase
I recall a critic from TV Guide once saying that it took an entire team of actors and a truckload of gadgets in "Mission Impossible" to replace Patrick McGoohan's "Secret Agent". That seems like the ultimate compliment ever bestowed upon any actor in a TV series. Did you hear that, Patrick? Cheers!

(If this review was helpful in any way, please click on the "Helpful" key below, or write a comment. Thanks).

Dr. Greg A. Grove
5.0 out of 5 stars If you enjoy the James Bond kind of television program
Reviewed in the United States on August 16, 2016
Verified Purchase
If you enjoy the James Bond kind of television program, this set is for you. It's smothered in intrigue, craftiness, cunning, wit, wisdom, intelligence, simmering in a mild broth of horror and violence. "Danger Man" (aka Secret Agent) is an 80-episode event in stunning black and white. The music soundtrack is brilliant! The composer underscores suspense and alerts you to upcoming catastrophes (or successes). One difference from James Bond: the hero has high ethics and morals. No steamy bedroom scenes! Oh well...probably better for you to create your own in that regard. (grin)
Read more
28 people found this helpful
Helpful
Report abuse

F. Leto
5.0 out of 5 stars Great TV Series
Reviewed in the United States on November 12, 2020
Verified Purchase
This is a great tv series. If you like quirky British mystery shows, this is one of the best. The first 30 or so episodes are approximately 30 minutes long. It is amazing how much drama one can pack into a half hour. The full hour shows are not as taut but I enjoy the pace of them almost as much. The shows are well written and well acted in that British style of writing and acting. The picture is very clear and the sound is very good mono, if at a little low level. My wife and I thoroughly enjoyed this series. I highly recommend it to fans of 60's tv. Not quite as out there as the Avengers or Prisoner but very entertaining. Enjoy. A very good investment.
Read more
5 people found this helpful
Helpful
Report abuse

andi
5.0 out of 5 stars "Danger Man" or "Secret Agent"... a spy who is a classy good guy.
Reviewed in the United States on November 21, 2016
Verified Purchase
Well written, well acted and more enjoyable than I expected. I don't remember watching it when it was on TV, but I enjoy many of the British series so I decided to invest in it.

There were so many clever spy accessories John Drake had at his disposal that it was rather fun to see what would turn up in the next episode. John Drake is a great character, owing to the expertise of Patrick McGoohan's many skills in portrayal of the character, his ability to convince the producers to allow him to shape the character, and his knowledge of how each episode was best developed.

I really preferred the half-hour episodes mostly because they were faster paced, but the hour long ones often were more involved and never really disappointed me. The only criticism I have is about the audio. As other reviewers have mentioned, it needed to be played at maximum volume. Especially in scenes where Drake had to speak quietly so the villains couldn't' overhear the conversation. I really don't think this is the fault in the manufacturer's production. I think the problems were in the locations used for filming since much of it was done on location rather than in-studio. As for the overly-loud volume at the opening of each show, that was not unusual for lots of shows, since it was a way to get attention to the show starting and getting folks planted in front of the tube. Ratings are still all-powerful in TV land.

There is also a very insightful interview with McGoohan's oldest daughter on the last disc which is really a great bonus of the set.

W. Hinson
5.0 out of 5 stars Like most American households in 1965
Reviewed in the United States on January 14, 2015
Verified Purchase
When Secret Agent came to America back in 1965, I was 13 1/2 years old and my brother was 18. Our parents were very much into bowling at the time and would leave us at home on league nights. Like most American households in 1965, we had one television. So, when we boys were left at home we would fight over what to watch on TV. There was no remote to fight over, we had to physically turn the knob of the television tuner.

My brother and I knew that we might be attacked by the other while turning to the channel we wanted to watch, and occasionally such an attack would interrupt our turning of the tuner knob resulting in landing on a channel neither of us intended. One night when the tuner landed on an unintended channel we heard the familiar voice of Johnny Rivers. We stood frozen as we watch the intro to Secret Agent. Wow! We watched the episode together and we both agreed that it was very cool.

I purchased the 2010 A&E set a couple of years ago. This Christmas I gave my brother the new Shout! Factory/Timeless Media set. He has already watched the first and second seasons. We still agree, as we did back in 1965 that Secret Agent is -- very cool!

By the way, this scenario is also how we discovered the Outer Limits in 1963. ;-)
Read more
62 people found this helpful
Helpful
Report abuse

nitemage
4.0 out of 5 stars Looks like Irving Flemming based a lot of his books on this show
Reviewed in the United States on April 1, 2018
Verified Purchase
I actually thought this was Secret Agent Man that ran in the US but it is not. But I am pleased with the show and DVD. What is surprising is how many actors from the James Bond movies had their first roles in this TV series like Lois Maxwell and Bernard can not remember his last but he played the first M. From what I just watched a lot of the James Bond movies are based on this TV series. There is even an episode in the 3rd disc that seems like the beginning of Spector, it even has the ring Spector agents wore, makes you want to go HMMMM!
Read more
7 people found this helpful
Helpful
Report abuse
See all reviews

karponski tweaker
5.0 out of 5 stars danger man rules
Reviewed in the United Kingdom on September 25, 2013
Verified Purchase
once again hard to get all episodes in one box multi region dvd player is the answer so you can watch all this great tv from years gone by and this is good
Read more
Report abuse

Pat
5.0 out of 5 stars Secret Agent DVD
Reviewed in the United Kingdom on February 16, 2013
Verified Purchase
Arrived to-day in perfect condition factory sealed and earlier than expected. I am well pleased with my purchase. 18 discs at a bargain price. GREAT !!!!
Read more
2 people found this helpful
Report abuse

Og Oggilby
5.0 out of 5 stars In praise of Patrick McGoohan
Reviewed in the United Kingdom on May 28, 2007
Verified Purchase
This is a superb collection - yoking together all of the 'Danger Man' ('Secret Agent' in the US) episodes. The cumulative effect of watching several of these days is to admire the cleverly nuanced acting skills of Patrick McGoohan. There is none of the campness of Roger Moore in 'The Saint'. McGoohan was one of the finest actors of his generation, easily up there with the likes of Stanley Baker, Sean Connery and co, and the John Drake character that he developed was multi-faceted, deeply layered, and yet was delightfully shorn of the 'Romantic' interest that dogged other such series. Fisticuffs are rare, yet highly expolsive when they do occur, and even the gadgetry that was added in later episodes - no doubt arising from the similar toys used in James Bond films - is in keeping with the character. It's also great to see a range of classic Brit character actors, such as Richard Wattis, Warren Mitchell, Derren Nesbitt and others, utilised to great effect, in a series firmly out of the Golden Age of British TV. They don't make 'em like this any more, truly.
Read more
20 people found this helpful
Report abuse

Jacob K.
5.0 out of 5 stars Spy series beginnings.
Reviewed in Canada on February 26, 2019
Verified Purchase
Danger Man, before its reincarnation as Secret Agent Man, was the first of the well written, innovative espionage series which, in my opinion, paved the way for all that followed ( I Spy, Mission Impossible, The Avengers,etc). The character of John Drake was played superbly by Patrick McGoohan because he did not play the character as a TV version of James Bond. Great watching this series again after some 52 yrs.
Read more

5.0 out of 5 stars Spy series beginnings.
Reviewed in Canada on February 26, 2019
Danger Man, before its reincarnation as Secret Agent Man, was the first of the well written, innovative espionage series which, in my opinion, paved the way for all that followed ( I Spy, Mission Impossible, The Avengers,etc). The character of John Drake was played superbly by Patrick McGoohan because he did not play the character as a TV version of James Bond. Great watching this series again after some 52 yrs.
Images in this review

Amazon Customer
5.0 out of 5 stars The entire process from purchase to delivery was excellent.
Reviewed in Canada on February 21, 2020
Verified Purchase
Secret Agent (aka Danger Man) was well packaged and well produced. I was a child when it came out in the 60's and it was a real treat to bring back that time and place in my life.. We had one channel on the TV which was CBC Television.
Read more
2 people found this helpful
Report abuse
See all reviews