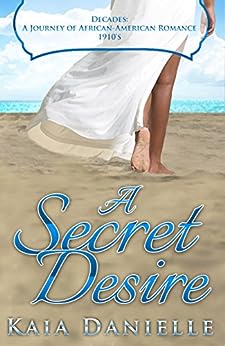 by Kaia Danielle (Author) Format: Kindle Edition
Book 2 of 10: Decades: A Journey of African American Romance
See all formats and editions
Sorry, there was a problem loading this page. Try again.
A headstrong widow finds herself in the arms of the one man she shouldn’t want in a 1912 all-Black beach resort.

With funds running low, widow Halle Duncan’s only means for survival is to revive her late husband’s abandoned dream: a summer getaway where their people can relax and enjoy themselves, free from the weight of prejudice. An arranged union had forced her to marry young. Now once again, society dictates that she have a man by her side to succeed. But, Halle is in no rush to remarry, or even take a lover -- until an old family friend appears to tempt her with forbidden fruit.

Nick Green has been in love with Halle Duncan since he first glimpsed her years ago. Back then, he had no intention of disrespecting his mentor, and she had been his wife. Even after the old man’s death, Nick vowed to keep his distance. But when an unscrupulous land investor threatens to snatch away Halle’s resort, Nick is forced to get closer than even he could have imagined.

Kaia Danielle writes contemporary romance, historical romance, women’s fiction and a graphic novel that is resisting the revision process. Her short stories have appeared in several national magazines and an anthology. She is an alumnae of the VONA writing workshop. Originally from New Jersey, she now calls coastal Georgia home. You can find her tweeting about being a Jersey Girl in South Georgia, her foodie adventures and popular culture in general on her @kaiawrites handle.

Edwina Putney
4.0 out of 5 stars Hearts aflame
Reviewed in the United States 🇺🇸 on February 19, 2018
Verified Purchase
I enjoyed the storyline and black history of A Secret Desire by Kaia Danielle, especially the older woman/younger man aspect of the relationship in that period of time. Halle Duncan, is the widow of a Negro high society Washington DC doctor, but is left virtually penniless because of her late husband's many debts. With no means of support in DC, except to remarry, Halle decides to return to Cape May, New Jersey, to help her sister run their family's struggling resort inn for Negroes, that is located on the Jersey Shore. To provide for Halle's safety on the long and arduous train journey home, Dr. Nick Green offers to accompany her. Nick was rescued from a life of poverty by Halle's husband, and was mentored and set up as Dr. Duncan's associate in his medical practice. With Dr. Duncan's death and the subsequent closing of the practice to help pay off debts, Nick Green is out of work. But he sees this trip as an opportunity to help his mentor's widow, but also to help himself remain close to Halle, who has been the object of his secret desire since meeting her many years before. Plus, it also gives him the chance to check out the possibility of opening a pracice in Cape May, which will keep him close to Halle. So the story revolves around Halle's and Nick's attempts to focus on saving the resort from foreclosure, while attempting to deny their increasing feelings for each other. Halle's sister sees the mutual attraction between them, and encourages her sister to act on it. Her sister has always been a free spirit, and encourages Halle to be more independent thinking and less concerned with society's pious rules for the behavior of women and widows.

The historical aspects of black society in the nation's capital, as well as the presence of Negroes on the Jersey Shore during segregation, piqued my interest, and I will be reading some of the books from the reading list provided. The book's ending left me wanting more, so I hope that author Kaia Danielle writes a sequel or two, because I am curious about the resort's success, whether Nick is able to establish a medical practice in Cape May, and whether the lecherous attorney who handled Dr. Duncan's estate gives up or continues trying to force Halle to be with him (hint, hint). Book two of the Decades series completed. Can't wait for March, and the release of book three!
Read more
Helpful
Report abuse

Brenda #RIC
4.0 out of 5 stars Good Story
Reviewed in the United States 🇺🇸 on February 21, 2018
Verified Purchase
I enjoyed this story that featured Halle Duncan and Dr. Nick Green. The younger man-older woman trope worked well with the storyline. Kudos to Kaia Danielle who adeptly incorporates this trope into the story. However, the heart and soul of the story was the historical element that the author weaves into the storyline. The fact that there were viable beach resorts located on the East Coast that Black people owned and operated during the 1910’s was a revelation. Widowed Halle leaves the social elite of Washington D.C. to return to her roots, her family’s resort to help her sister open it for the summer season. Nick is in love with Halle, and he accompanied her to the resort in order to finally get a chance to be with her. This was a captivating story, but I felt the ending was rushed. It left me with a couple of unanswered questions that could have been answered with the addition of one chapter. Nevertheless, I recommend this charming story. This series Decades: A Journey of African American Romance is proving to be entertaining and educational.
Read more
One person found this helpful
Helpful
Report abuse

Booklady4469
4.0 out of 5 stars Entertaining Read
Reviewed in the United States 🇺🇸 on March 11, 2018
Verified Purchase
Nick Green had been given a decent live and a future by Halle Duncan’s late husband. Little did she know he was in love with her. This is a whirlwind story thats very entertaining. Young man in love with a older woman, who needs to letgo and embrace what he has to offer. Great read.

BeverlyD
4.0 out of 5 stars Elite Washington society
Reviewed in the United States 🇺🇸 on February 19, 2018
Verified Purchase
Once you get past the grammatical errors there is a great story of Black Washington society and elite cultural families. Loved characters Nick and Halle. Good references for further reading and resorts for People of Color.
Read more
Helpful
Report abuse

CC
3.0 out of 5 stars Good story
Reviewed in the United States 🇺🇸 on March 2, 2018
Verified Purchase
I liked the story of Nick and Halle Duncan. I wished that it was longer and had a little more substance. I enjoyed learning a little about the Black upper class society and the obstacles the lower classes faced. Good book, just needed more.
Read more
Helpful
Report abuse

Toni Bonita
3.0 out of 5 stars Admit It
Reviewed in the United States 🇺🇸 on May 10, 2018
Verified Purchase
Great story, made me laugh several times. Reading it was difficult because of the poor editing. I will read additional work by the author, and continue to read the Decade series.
Read more
Helpful
Report abuse