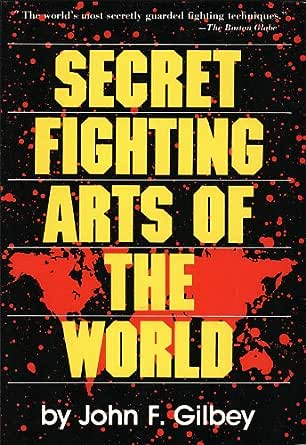 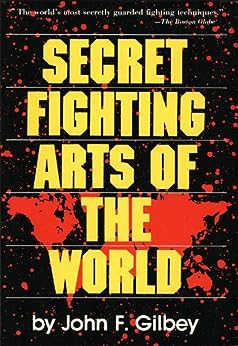 Howard McKenzie
4.0 out of 5 stars Fact or fiction, it's a great book.
Reviewed in the United States on May 15, 2014
Verified Purchase
I first read this book decades ago. Having since read a few of Robert Smith's books, I realized that John Gilbey and Robert Smith were probably the one and the same person, the similar writing style giving the show away.

I have since understood that Smith may have written Secret Fighting Arts of the World as something of a spoof, but I also found that at least one of the techniques outlined in this highly entertaining book actually works. As such, the book appears to contain both fact and fiction, leaving the reader to sort out which is which.

The MVD Special, for example, is an effective technique for dropping a belligerent to the ground suddenly, leaving him with no further desire to fight. I won't go into detail, only to say that I was surprised at its effectiveness in reducing an aggressive opponent helpless to continue.

I have no doubt that many of the other stories told so well by the author have at least some measure of basic truth, and having now purchased and read it again recently, I am still as entertained as I was when I first read it all those years ago.

The book is not up there with Smith's "Chinese Boxing: Masters and Methods" but it is still a handy addition to one's martial arts library, just for its uniqueness alone.

Amazon Customer
5.0 out of 5 stars Secret Fighting Arts
Reviewed in the United States on November 27, 2016
Verified Purchase
Very educational book about the secret fighting arts of the world. The author has done a lot of traveling all around the world searching out people based on rumors to see if they were true. Some of the techniques talked about in this book can have very devastating effects and long term injuries. It is a good read, but none of it should be tried at home unless there is an experienced person available.
Read more
One person found this helpful
Helpful
Comment Report abuse

Bokhara
5.0 out of 5 stars This is a textbook for Martial arts.
Reviewed in the United States on March 18, 2017
Verified Purchase
Have you ever actually DONE the moves "Gilbey" describes???? I trained off and on with Robert Smith back in the 60's and we discussed this book. He pointed out that very few people would see it as what it really was...a basic text on martial arts. He asked me how many of the chapters had I applied and developed as tools to use in combat? I first applied the Cantonese corkscrew technique from Xingyi. In a short time I applied it during a Karate free fight, and the person I was fighting doubled up, throwing up all over the mat. I then went to work applying the rest of the chapters and found good results across the board. So don't read this book as a "fairy tale". Treat it like what it is, a text book on martial arts very skillfully written by a true master, Robert Smith.
Read more
2 people found this helpful
Helpful
Comment Report abuse

Amazon Customer
5.0 out of 5 stars Fighting Arts
Reviewed in the United States on December 2, 2016
Verified Purchase
An excellent read. If you want to know more about what special, and secret fighting arts people have developed from all over the world, this is something you' lloyd love.
Read more
Helpful
Comment Report abuse

Jose Rogers
5.0 out of 5 stars Jose Rogers here and its real as can be
Reviewed in the United States on January 7, 2014
Verified Purchase
i got this book back in the 80's and i use the methods discribed in this book as i trained in kuan shu kung fu , with cardin shannach . .chi is as real as the water coming out a water hose that you can see and feel.
its just depend on the trainee or student who wants it bad enough
Read more
Helpful
Comment Report abuse

Ken
5.0 out of 5 stars Good
Reviewed in the United States on June 28, 2016
Verified Purchase
Had this book when I was a kid. Good entertainment
Read more
One person found this helpful
Helpful
Comment Report abuse

Lawrence C. Wingard
5.0 out of 5 stars A really, good book, written about, certain & very, rare, fighting style's, from around, the world!
Reviewed in the United States on April 3, 2015
Verified Purchase
A" really great, and, old book, that I've, waited too, own for, year's & year's !!!
Thank You !!!
Read more
Helpful
Comment Report abuse
See all reviews

Nic B
4.0 out of 5 stars Robert W Smith here writing about more esoteric martial arts
Reviewed in the United Kingdom on August 4, 2018
Verified Purchase
From the 1940's to the early 1970's, there were two Westerners who made it their lifes work to Study and then write about the various Martial Arts of the World. One was Donn Draeger and the other, Robert W Smith. Both achieved great recognition as authorities in this field. Whilst Donn mostly studied the Japanese arts, Robert preferred the Chinese. But on his travels he found some Teachers and Arts that were hard to categorize. Here are some of these.
Read more
Report abuse
See all reviews