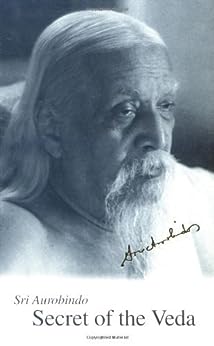 Secret of the Veda (Guidance from Sri Aurobindo) Kindle Edition

by Sri Aurobindo (Author) Format: Kindle Edition
See all formats and editions
Sorry, there was a problem loading this page. Try again.
Sri Aurobindo breaks new ground in interpreting the ancient Vedas. His deeper insight into this came from his own spiritual practices for which he found vivid allegorical descriptions in the Vedas. The hidden meaning of the rig Veda is revealed with numerous translations and commentary. Many have been perplexed by the reverence accorded to the Vedas when they read past commentaries or translations. Sri Aurobindo was able to uncover the mystery of the double meanings, the inner psychological and yogic significance and practices and the consistent, clear sense brought by this psychological view of the Vedic hymns. Finally, the true inner meaning of the Veda and its relevance to the seeking after self-realization and enlightenment is revealed.
Read more
Previous page
Next page

S. Ferguson
5.0 out of 5 stars Esoteric & symbolic insight
Reviewed in the United States 🇺🇸 on February 6, 2014
Verified Purchase
While I do not agree with Sri Aurobindo’s theories of evolution, I do find his analysis of the Rig Veda compelling. He evaluates the Rig Veda from the inner esoteric perspective, what he terms 'psychological' - term more general in the era he initially wrote this study, 1914-17.

For example, Sri Aurobindo understands the term yajña to be symbolic: “We find in the Gita the word yajña, sacrifice, used in a symbolic sense for all action, whether internal or external, that is consecrated to the gods or to the Supreme [the One]. …If these words could be interpreted symbolically, I [Sri Aurobindo] found that the progression of thought became more perfect, more luminous, more coherent…I felt therefore justified…in pursuing my hypothesis…the symbolic sense of the Vedic ritual.”

The gods in the Rig Veda, which is the earliest Sanskrit text and said to be the source of all the other texts, are Agni, Surya, Varuna, Mitra, the Ashvin Twins, Sarasvati, Usha, Vayu, and Indra.

Aurobindo says that the gods in the external sense are the “universal powers of physical Nature personified; in any inner sense they must be universal powers of Nature in her subjective activities, Will, Mind, etc.” By the inner sacrifice to the gods, man can reach immortality. Agni for example represents the fire of the divine Will and Wisdom. Surya is not only the Sun as centre of our solar system, but [Surya] symbolizes “the superconscient Truth.”

Usha is not merely a physical dawn, she is “of a luminous movement, vast with the Truth, supreme in (or in possession of) the Truth, bringing with her Svar [heaven].” RV.V.801. “The Dawn is the inner dawn which brings to man all the varied fullness of his widest being, force, consciousness, joy…” Aurobindo concludes that, “The sacrifice is the giving by man of what he possesses in his being to the higher or divine nature…the outer sacrifice itself can be nothing but the symbol of an inner giving.”

R.L. Kashyap's translation of the Rig Veda is the result of this initial research. The first volume and/or full set is available on amazon. R.L. Kashyap has published many smaller books examining themes in the Rig Veda, one of which "Semantics of the Rig Veda" is an excellent introduction to his work. For those who are serious about understanding the mystery and enigma of the Rig Veda, these books are definitely worth your time.
Read more
19 people found this helpful
Helpful
Report abuse

Iggy
5.0 out of 5 stars Easily the Greatest Spiritual Book ever created,
Reviewed in the United States 🇺🇸 on August 10, 2017
Verified Purchase
Great product. But I would give more stars for the content, as this is one of the greatest spirit-driven books ever written. I am pretty much sure of that, because the Secret of the Veda is in the Understanding of their content. Sri Aurobindo Understood their content through his own vision, and behind the language he has captured the essence of those esteemed and rather cryptic sounding books - the Vedas.

Like an Old Testament we are dealing with the literature that has been known to influence millions of readers, but the utter preoccupation with their very existence and the ritual surrounding the religious takes one away from the substance, and that is of no little importance, because in these books we have an all-encompassing human heritage, and keeping it in the closed off secret layer, is just what the Books and their interpreter Sri Aurobindo advise against. Definitely a recommended reading for all spiritual and just seekers of contention and happiness out there. The Secret is simple and available.
Read more
11 people found this helpful
Helpful
Report abuse

A Friendly Voice
5.0 out of 5 stars Stellar
Reviewed in the United States 🇺🇸 on July 9, 2018
Verified Purchase
Sri Aurobindo is a astonishing as a writer, thinker and philosopher, and that is why I am so grateful to be able to read anything he writes.

This particular book has opened doors in my understanding of the original 22 archetypes of ancient egypt, which later became known as the tarot. in particular, the 7 archetypes of the spirit (its matrix, potential, catylst, siginficator, transformation etc). Other archetypes relating to mind can be understood by Western philosophers from Aristotle to Kant, but the Spirit is the most subtle area of understanding. This book places you in the secret location where the honey of immortailty reaches your lips.

This book definitely makes accessible the ideas of the Vedas, although that doesn't mean they will be grasped by anyone. Anyone, however, with a natural intuitive remembering .... owes it to themselves and the world to read this work !
Read more
4 people found this helpful
Helpful
Report abuse

isabelle Verse
5.0 out of 5 stars Book in perfect state
Reviewed in the United States 🇺🇸 on August 2, 2019
Verified Purchase
This book gives the view of Aurobindo on how to understand and interpret the poetic style of the Veda. He points out and has verified the esoteric meaning of many words that should be understood at a psychological level rather than a litteral level. For example the word "Go" means litterally "cow" but also "light" and "connaissance divine" or "Ashva" means "horse" but also "strength" . And in the Veda, the secret is that second meaning, it changes completely the scope of these sacred texts, gives them a depth and a profound psychological meaning.
Read more
One person found this helpful
Helpful
Report abuse

Elliot Malach
5.0 out of 5 stars A Guide to Interpreting the Veda
Reviewed in the United States 🇺🇸 on July 17, 2010
Verified Purchase
The Veda is a book of esoteric symbols in the form of ritualistic hymns. The aim of the Veda was illumination, not logical reasoning. It is part superstition, part allegories of nature with an astrological element thrown it. The hymns are written in obscure language, are hard to understand and deliberately ambiguous. Good reason to write a book for the unwashed hordes.

The author went to painstaking lengths to come with a theory that made the Veda make sense. He explains this in the first part of the book. The remaining sections cover selected hymns which are translated with the author's comments following.

The secret? Truth and mastery of the human existence. The Veda speaks to people on many levels, depending on where they are on their path to enlightenment.

For a complicated subject, the author does a good job of explaining his theory and translating the hymns. It is a dense book, but easy to understand.
Read more
11 people found this helpful
Helpful
Report abuse

Ellen K. Johnson
5.0 out of 5 stars Aurobindo's Secret of the Vedas
Reviewed in the United States 🇺🇸 on October 13, 2019
Verified Purchase
How can anyone go wrong with Aurobindo!!! A positive new approach that explains the ancient writings and puts them in perspective for the new humanity. It seems that the Rishis knew about it all along!
Read more
4 people found this helpful
Helpful
Report abuse

Kristie
5.0 out of 5 stars Veda comes alive
Reviewed in the United States 🇺🇸 on October 28, 2017
Verified Purchase
If you know nothing about the Veda some of the explanation in the first chapters will be rough, but after that Sri Aurobindo brings the Veda alive for humanity today.
Read more
5 people found this helpful
Helpful
Report abuse
See all reviews

PINAKI DHARA
5.0 out of 5 stars lifetime experience
Reviewed in India 🇮🇳 on June 21, 2020
Verified Purchase
Tough to start but after few pages when getting tuned I just find myself in an amazing argumentative world of
Sri Aurobindo. A journey through the hidden knowledge of Veda wih Sri Aurobindo is a lifetime experience. Have just finished the first part 3 days before and I am still in that world of Sruti. I need some time to start the second part.
Read more

5.0 out of 5 stars lifetime experience
Reviewed in India 🇮🇳 on June 21, 2020
Tough to start but after few pages when getting tuned I just find myself in an amazing argumentative world of
Sri Aurobindo. A journey through the hidden knowledge of Veda wih Sri Aurobindo is a lifetime experience. Have just finished the first part 3 days before and I am still in that world of Sruti. I need some time to start the second part.