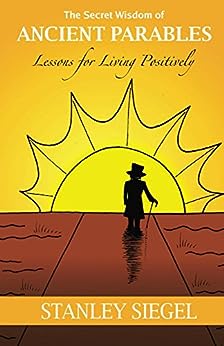 by Stanley Siegel (Author) Format: Kindle Edition
See all formats and editions
Sorry, there was a problem loading this page. Try again.

The Unlimited Possibilities of Abundance and Prosperity Await!

This book uncovers the ancient secrets to living life positively and achieving a state of uninterrupted well-being. If you follow the lessons, essays and exercises within, you will learn how your thoughts shape your life, how to focus your true desires, and how to create a life of limitless
possibilities.

Get the Insight of a Conscious Psychologist & Psychotherapist

After each parable, author and Psychology Tomorrow founder Stanley Siegel interprets the passage using his experience as a practicing psychotherapist for nearly 40 years. We all have different ways of learning, and while the stories alone will slowly sink into the deepest levels of your psyche, the brief essays will serve as food for your conscious mind.

This book will help you reinforce the power of positive action by realizing:

And help solve common yet crippling problems, such as:

With every decision, we shape and create our destiny.

Limitations are within our minds, and it is up to us to rise above them.

The wisdom found in parables is universal, immune to changes in culture, time or place. While these stories originate from many different traditions, their messages transcend how we conceive reality, reaching far into the depth of our psyches as well as touching the edges of our souls. If we abide by their lessons, we can reshape our experience of life by viewing it from the highest peak, rather than the gloom of its shadows.

Read the book people are calling "A Personal Trainer for your soul."

"The Secret Wisdom of Ancient Parable is like a personal trainer for your soul. Chapter titles, such as 'Thought Errors' and 'Transference', help the read through each of those specific problems. The book does this first with a Tao-te-Ching-esque parable, which may seem like it has nothing to do with the actual problem addressed in the chapter title. Siegel's commentary follows, and this is where the healing can actually begin. ... Plus, the cute drawings throughout the book are parables in and of themselves." - Anetropi Health

"The parables alone in this book are profound, entertaining, easy to read. Upon taking a second look, each story would actually make a perfect bed time story for children. Plus, the book includes brilliant illustrations that correspond to each parable. While seemingly simple on the surface, each story takes on an ulterior meaning when Siegel adds his commentary afterwards. The story suddenly goes from a cute 1-2 page passage to a transformative piece of advice that can be applied to anyone's life. For anyone who has ever read any of Siegel's other books, he is professional when it comes to mindfully picking apart any content in order to reveal the deeper subtext, like a surgeon preparing to remove a few malignant tumors from a patient. ... This is the best self-improvement book that I have read and one that I will keep with me always." - New York eBook Examiner

Stanley Siegel, LCSW, is a psychotherapist, author, lecturer, and life coach. He is founder and Editor-in-Chief of Psychology Tomorrow Magazine and Alternative Therapists Network. His is the former Director of Education and Senior Faculty member of New York's Ackerman Institute for Family Therapy.[

After creating and writing the "Families" column for Newsday, he went on to author three popular books: The Patient Who Cured His Therapist and Other Unconventional Stories Of Therapy (Penguin/Dutton 1992; Penguin/Plume, 1993; Marlowe and company, 1999) which have been translated into 5 languages, Uncharted Lives: Understanding The Life Passages Of Gay Men (Penguin/Dutton, 1994; Penguin/Plume 1995), and Your Brain on Sex: How Smarter Sex Can Change Your Life ( Sourcebooks, 2012). In May 2016, The Secret Wisdom of Ancient Parables: Lessons for Living Positively was published by New Consciousness Media the parent company of Psychology Tomorrow Magazine.

Siegel has taught at the State University of New York at Stony Brook, Adelphi University, and the University of California, Berkeley; was the founding Director of the Family Studies Center in Huntington, New York, and has served as a consultant to hospitals and mental health centers throughout the country.

Regularly quoted in the media, he has appeared on ABC's Good Morning America several times, as well as many other television and radio programs, and has acted as a consultant for film and television. Siegel was invited on The Oprah Winfrey Show to discuss "How Healers Heal Themselves."

Following a passion for classical and contemporary dance.He served as the Dance Editor of Show Business Magazine, writing weekly dance reviews and reporting on the contemporary dance scene.His daughter, Alyssa Siegel, LPC lives in Portland, Oregon and is a contributor to Your Brain on Sex.

With nearly 50 years of experience in the field of psychology, Siegel has developed an unconventional and tradition-challenging approach to psychotherapy that is highly regarded.

5.0 out of 5 stars
5 out of 5
17 global ratings
How customer reviews and ratings work

bill
5.0 out of 5 stars An Important Read
Reviewed in the United States 🇺🇸 on June 23, 2016
Verified Purchase
In our daily struggles to navigate the unquiet territory of self and society we could find no better maps, charts and assistance than in the stories bequeathed to us by the ancestors…stories which have been collected and considered for us by Stanley Siegel in his exquisite, and very accessible “The Secret Wisdom of Ancient Parables: Lessons for Living Life Positively. ”

In Siegel’s examination and exposition of these ancestral chronicles of adventure, struggle and living we are taken into strengthening the meaning and practice of our own “stories”. Lessons and learning for the understanding and transformation of our own ongoing relationship to heart and mind. Health.

Indeed, there are no more necessary and important “stories” from human history. For “...only the dead can grant us legitimacy. To be human means to come after those who came before” - Robert Pogue Harrison, “The Dominion of the Dead”.
Read more
2 people found this helpful
Helpful
Report abuse

Amazon Customer
5.0 out of 5 stars A valuable little book
Reviewed in the United States 🇺🇸 on June 25, 2016
Verified Purchase
This deceptively simple book uses parables that have been around forever to offer tips on overcoming negative thinking and related problems in living. It is surprising how the parables, invented long before psychotherapy existed, are understandable, as the author explains, in terms of cognitive behavioral psychotherapy. Stanley then goes on to offer exercises for each of them that use relaxation and visualization to augment the real power of the parables, simultaneously highlighting the fact that they always were directed not only at the intellect, but at the unconscious, where deeper change must take place.
Read more
Helpful
Report abuse

Amazon Customer
5.0 out of 5 stars Five Stars
Reviewed in the United States 🇺🇸 on April 1, 2017
Verified Purchase
I liked this book, but too short! I wanted to read more.
Read more
Helpful
Report abuse

Phill
5.0 out of 5 stars Proactive and Powerful: Insights through Narrative.
Reviewed in the United States 🇺🇸 on June 19, 2016
The book is provocative in its depth and understanding of the human condition. Simple in its style but infinite in its wisdom, the author (Stanley) provides an insightful overview of some of the most sensitive topics in consciousness and psychology such as Self Acceptance and Letting Go.

More inspiring is the call to action at the end of every lesson that motivates the reader toward action and betterment. I personally enjoyed being given the emotional and physical space to reflect on both the parable and the author's comments. Many other books in the field that I have recently lead seem to lecture. They provide cases of joy and success and simply ask "Why can't you be that?" The Secret Wisdom is refreshingly much more because by design it urges exploration and dialogue.

Overall The Secret Wisdom of Ancient Parables is simple, elegant, and a sea of insight - an unexpected life companion for voice and reason in a time so easy to lose both in our daily lives.

Phill
5.0 out of 5 stars A Lifelong Companion
Reviewed in the United States 🇺🇸 on June 19, 2016
I wrote a review of the book in its paperback form:

The Secret Wisdom of Ancient Parables: Lessons for Living Positively .

It is great to be able to access such an empowering book anywhere. The deep insights and topics addresses the deep underlying aspects of humanity and its something anyone can benefit from. More than just a self help book: The Secret Wisdom blends keen insight and masterful prose into a book that invites growth, engagement, and dialogue.

It has earned a spot on my shelf or "Cloud" as a life long companion on my walk through life.
Read more
One person found this helpful
Helpful
Report abuse

Lindsay Burns
5.0 out of 5 stars Such a fulfilling read!
Reviewed in the United States 🇺🇸 on June 20, 2016
I am an avid novel reader and I connect with stories in a personal way. I find such satisfaction when I find meaning that relates to my own life in the books that I read. I loved this book because the stories were meaningful to me in their own right, but having the added commentary and exercises from the author, a distinguished psychotherapist, made reading this book even more of a rewarding experience. Highly recommend to anyone looking to reduce negativity, anyone who is seeking self-acceptance, or anyone just looking to gain a little inspiration.
Read more
One person found this helpful
Helpful
Report abuse

Andrew Erickson
5.0 out of 5 stars Fantastic insights on childhood stories
Reviewed in the United States 🇺🇸 on June 19, 2016
The parable on positive action really rang true with current events in my life. Stanley's advice on how to think proactively and positively to accomplish seemingly lofty goals challenges me to approach growing my business in a new way. It is easy to let pressure and risk cripple strives towards our goals.

"The most difficult time to take action is the very first time."