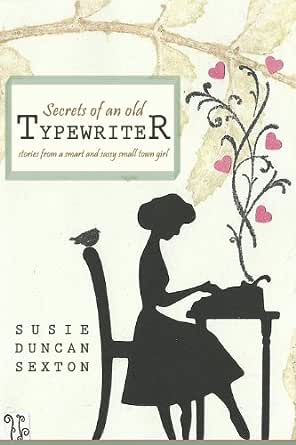 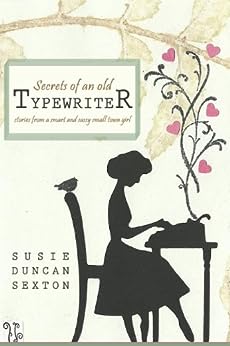 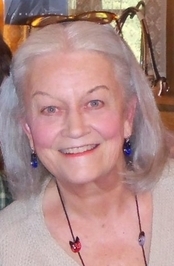 Secrets of an Old Typewriter: Stories from a Smart and Sassy Small Town Girl Kindle Edition

4.1 out of 5 stars
4.1 out of 5
16 customer ratings
How does Amazon calculate star ratings?
Amazon calculates a product’s star ratings based on a machine learned model instead of a raw data average. The model takes into account factors including the age of a rating, whether the ratings are from verified purchasers, and factors that establish reviewer trustworthiness.
Top Reviews

Kandy Kay Scaramuzzo
5.0 out of 5 stars Hometown history lesson
Reviewed in the United States on July 17, 2013
Verified Purchase
This book is a true testament to what it is like to live in a small town. The author starts the story a few years before when I was born, but in small towns things don't change very rapidly. Since I grew up in a small town, I can totally relate to the author's ramblings about living in the protected shell of a small town. If you have never lived in one, you might find it hard to believe that so many people would get worked up over minor things like movies, but it is soooo true.
The author attacks the description of the small town and the time line through it with gusto. At times it seems she uses entirely too many words to describe some situations. That may be the case in a larger township, but by using her wordy descriptions, she is remaining true to her roots from a small town. Everything that happens there is an adventure and worth the enthusiasm of extra wordiness to describe it.
This is a fun and wordy romp through one person's eyes of what it was like to grow up and live in a small town. It was very true to form to what I remember the way of life was like. It brought back a lot of memories for me. There were quite a few stories strung together to make up this book. It flowed nicely and was quite enjoyable. The author made good use of the assortment of old typewriters. I was gifted this book for an honest review. I thank the author for sharing it with me.
Read more
3 people found this helpful
Helpful
Comment Report abuse

Mary Shaull
5.0 out of 5 stars Amazing Susie
Reviewed in the United States on February 7, 2013
Verified Purchase
Susie writes so amazingly that I can't wait to see what magic her next sentence or thought will be. She rants and raves about her feelings and causes, and then sweetness pours out....all so true and sincere. She has made me rethink so many things about love, family, animals, values and life. How I admire her honesty and her gift of words.
Read more
3 people found this helpful
Helpful
Comment Report abuse

Skycop
5.0 out of 5 stars Secrets of an Old Typewriter
Reviewed in the United States on December 17, 2012
Verified Purchase
Great read of life and memories from a small Indiana Town.
Would suggest it for anyone looking for a funny and relaxing afternoon read.
Read more
2 people found this helpful
Helpful
Comment Report abuse

Donald O'Donovan
5.0 out of 5 stars Secrets of an Old Typewriter
Reviewed in the United States on November 10, 2011
Ride on the float in the homecoming parade. Be the homecoming queen. Order a chocolate shake at the corner drugstore. Own a black and white TV. Drink tap water straight from the garden hose. Dry your wash on a clothesline. Leave your front door unlocked at night. Seriously retro, Secrets of an Old Typewriter takes you back to small town America in the Forties and Fifties during what might be called the Age of Innocence--the period between World War II and Vietnam.

Columbia City Indiana is the iconic American small town in which author Susie Duncan Sexton was born, grew up, and has lived all her life as wife, mother, teacher and newspaper columnist.

Susi Duncan Sexton has a breezy journalistic style that is literate, witty and easy to read. She seems to be speaking to us rather than writing. You're right there with her, whether she's sitting in a rocking chair with Uncle Jim on Aunt Lellie's front porch smoking a pipe, or at the Columbia Theater munching purple Gummy Bears as she watches a film re-enactment of the fatal crash of fellow Hoosier James Dean's Porsche 550 Spyder. Secrets of an Old Typewriter will make you laugh and it will make you sad, and you'll smile at human foibles, including your own, as you dive into this nostalgic volume of a smart and sassy small town girl's memoirs.

"[My] fourth grade teacher Miss Demaris Smalley, all of four feet in height, attempting to pummel and simultaneously shove to the pea-gravelly ground a five footer classroom bully after blowing her "RECESS IS NOW SUDDENLY OVER" whistle..."

The history books skip over the interludes between wars, hurrying on to paint lavish portraits of the Alexanders, the Churchills and the Hitlers. But what about us? Ordinary citizens, mothers, fathers, children, teachers, friends? Why doesn't somebody write our history? Well, here it is, or at least a snippet of it. Susi Duncan Sexton gets up close and personal with her Columbia City Age of Innocence contemporaries, and her reportage is focused, detailed, often humorous, and refreshingly free of political or religious bias.

I'm going to confess that I didn't read Secrets from cover to cover, just like that. I picked an episode at random, then another, then another and another. I think the book is meant to be read that way, informally, as if you were gabbing with the author over the back fence. Secrets of an Old Typewriter is a scintillating pastiche of memories, anecdotes and portraits that the author has quilted together in a very agreeable way.

I think future generations of readers will be increasingly grateful for this book as the American Age of Innocence fades from living memory, because what we have here is the actual fabric of life as recorded by an active participant, more observant than most, wonderful with words and possessing an encyclopedic knowledge of popular culture. Secrets of an Old Typewriter is a treasure whose value can only appreciate as years go by.

Martin L. Davis II
3.0 out of 5 stars A 50's view of today's world
Reviewed in the United States on October 6, 2011
A child of the 1940's and '50's, Sexton aptly describes her autobiographical stories as 'sassy.' She visits various topics as a senior citizen looking back through her personal history, colored at times by old TV shows, movies and song lyric references. There are few political comments and little political bias. She is a vegan and animal lover. Her treatment of religion will no doubt be considered irreverent by fundamentalists, but she calls it like she sees it and as a free-thinker, lifts up the hypocrisy of time-honored conventions. The writing is sporadic at times, morphing into poetry on occasion, sentence fragments and stream-of-consciousness narrative. I was reminded of Vonnegut as I read this relatively short book, at times poignant, scathing, and compassionate. It is worth a second read sometime in the future.

This was an eBook copy submitted in exchange for an honest review.
Read more
6 people found this helpful
Helpful
Comment Report abuse
See all reviews from the United States