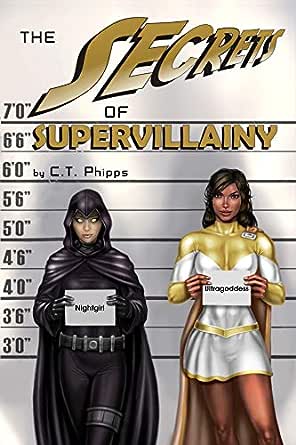 You've subscribed to The Supervillainy Saga! We will preorder your items within 24 hours of when they become available. When new books are released, we'll charge your default payment method for the lowest price available during the pre-order period.
Update your device or payment method, cancel individual pre-orders or your subscription at
Your Memberships & Subscriptions
There was an error. We were unable to process your subscription due to an error. Please refresh and try again. 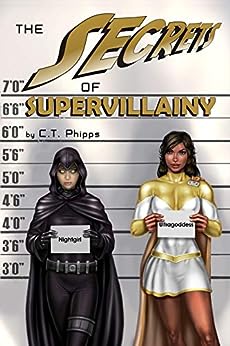 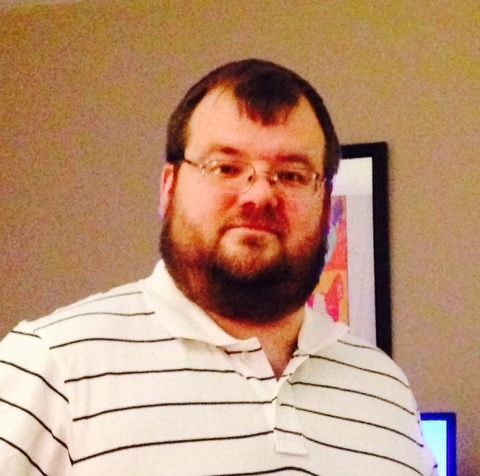 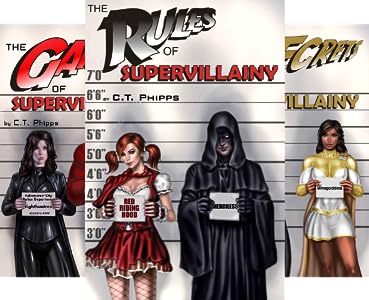 3.9 out of 5 stars
3.9 out of 5
62 customer ratings
How does Amazon calculate star ratings?
Amazon calculates a product’s star ratings based on a machine learned model instead of a raw data average. The model takes into account factors including the age of a rating, whether the ratings are from verified purchasers, and factors that establish reviewer trustworthiness.
Top reviews

Gilbert M. Stack
VINE VOICE
3.0 out of 5 stars Phipps Knows Comics!
Reviewed in the United States on December 21, 2017
Verified Purchase
Phipps obviously adores superhero comics and this series is a loving satirical homage to them. In this third installment, Merciless is trying to find a way to bring his wife’s soul back into her vampiric body while dealing with the hilarious mess of his life. To make matters worse, a massive conspiracy to take over the world is underway and the conspirators have decided they need to take him out first. Naturally Merciless, who insists he’s not a hero, is coming up with reasons to stop the bad guys.

I enjoy these novels, even if the first three have been a little too slow moving for my preference. My favorite parts are always the flashback scenes to Merciless’ college days when he’s unknowingly dating Ultragoddess, the greatest heroine in the world. They are always quite humorous and masterfully capture that nostalgic feeling old comics can bring to mind. The other thing I love about these books is how Phipps brings all the great themes and plot devices of comics into play in frankly ridiculous fashion. It just makes them fun.

Taylor Ellwood
5.0 out of 5 stars Back on track
Reviewed in the United States on October 6, 2019
Verified Purchase
The third book of the supervillainy saga gets back on track, picking up the pace from the second book, with more action and less banter. I like the tension between Gary and Cindy as well as the overall story. And there's a surprise behind who Gary is really fighting this time as well as a a cliff hanger of an ending that had me picking up book four right away.
Read more
One person found this helpful
Helpful
Comment Report abuse

He is a chaotic neutral person, who is so morally ambivalent on every level that he really doesn't stand for anything.

After a few books, I was hoping for a revelation that would make me understand the character and the events so far better.

But it's not worth buying the fourth book to find out. I just don't care about the characters any more.
Read more
Helpful
Comment Report abuse

Wayne Wehnau
5.0 out of 5 stars It makes you want to read the next book so bad
Reviewed in the United States on August 26, 2019
Verified Purchase
I loved, once again, all of Gary's snark and pop culture and nerd references. I like the back and forth with "cloak". I also like how he has evolved from not a hero, not a villain. But something less than but greater than both at the same time. He is every smart doofus in all of us, given powers and hot girlfriends. This series is the definition of fun
Read more
Helpful
Comment Report abuse

Bugwar
3.0 out of 5 stars Ok at the time
Reviewed in the United States on November 25, 2019
Verified Purchase
Worked through the book, not impressed
Read more
One person found this helpful
Helpful
Comment Report abuse

Sean C. Duggan
4.0 out of 5 stars The weakest of the three so far, but still good. A bit too much was stuffed into it for the narrative's good.
Reviewed in the United States on July 6, 2016
Verified Purchase
I bought, downloaded, and read this book in a rush last night. I then had to head off to bed, so my memories are slightly muddled, so forgive any factual bits I forget. First off, this entry felt even a bit more like being dropped into the middle of the plot. Gary's sister and her daughter now live in Mercilessland (formerly the Night Walker's estate). He's apparently been spending the last year or so trying to restore Mandy and has become a major force in the criminal world, as well as part of the top 1% despite attempting to donate as much ill-gotten goods to charity as he can.

The main plot was serviceable, following Gary's attempts to revive Mandy, his attempt to solve the death of Ultragod, and President Omega's attempt to kill Gary and destroy the rest of the world. The proofreading is better than the initial release of the last book, but still has its iffy bits from hilarious homophones to missing formatting and swapped letters to the occasional seemingly misplaced sentence, but it was readable. It felt a little bit cramped with a lot of action and new characters crammed in and then eliminated within a page or two. I did like the general thrust of when to stand your ground against the reality of the world and when to yield and accept that it's going to cause more pain fighting it. And, as is par for Gary's life, half of his problems get resolved almost off-stage by other characters and forces in the world.

I vacillated between a 3 and a 4 on this. It's not as good as the first two books in my opinion, but it is still good. It ends with even less resolution than the last two books, clearly indicating a sequel, albeit one where I don't know that the stakes are all that raised compared to what they faced here. I am looking forward to the greater aftermath from this compared to the prior books in that the mayhem is clearly indicated to have hit more than just Falconcrest or the Society of Superheroes, but rather been a worldwide disaster. It's hinted that the next frontier might be that final one of Space, so we do have new ground to cover although, at this point, I'm wondering if the fourth one should cap off Gary's tale.
Read more
3 people found this helpful
Helpful
Comment Report abuse

Martin
3.0 out of 5 stars Took a dip
Reviewed in the United States on May 7, 2019
Verified Purchase
The first 2 books were better. This one took a dip for me. I feel like the beginning was stale and I am not sure why. Although better editing than the 2nd book.
Read more
Helpful
Comment Report abuse

FMH
4.0 out of 5 stars I really enjoyed it.
Reviewed in the United States on May 2, 2017
Verified Purchase
Clever and entertaining. Never takes itself too seriously and it's a send-up of every superhero genre cliche while never losing sight of the story. I really enjoyed it.
Read more
One person found this helpful
Helpful
Comment Report abuse
See all reviews from the United States

Kindle Customer
4.0 out of 5 stars Roller coaster
Reviewed in the United Kingdom on January 24, 2019
Verified Purchase
Coudnt put it down for a sec. Great third entry to the series;awesome follow up to the second n thrilling setup for the fourth entry.
Read more
Helpful
Sending feedback...
Thank you for your feedback.
Sorry, we failed to record your vote. Please try again
Report abuse

K. Maxwell
4.0 out of 5 stars Unfocused but still fun
Reviewed in Australia on July 20, 2016
Verified Purchase
I enjoyed this new outing with Gary aka Merciless in his one step forward, two steps backwards life of craziness. However, I do think this is the weakest book in the series to date, mostly because of the very abrupt ending which made me feel like a whole section of the book was missing. Also this made the plot seem somewhat unfocused and a bit pointless to me as this is obviously only half of a story, still despite this annoying development I'll still pick up the next book in the series.
Read more
Helpful
Sending feedback...
Thank you for your feedback.
Sorry, we failed to record your vote. Please try again
Report abuse