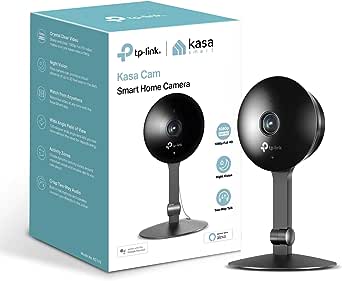 Buy this product as Renewed and save $5.00 from the regular price.

Kasa Cam by TP-Link – WiFi Camera for Home, Indoor Camera, Works with Alexa and Google (KC120) (Renewed) $34.99
(76)
Works and looks like new and backed by the Amazon Renewed Guarantee

The Kasa Cam indoor security camera monitors and protects what you love most, with wide-angle crystal-clear video day or night. Get instant alerts of any activity, whether it’s sound or motion, straight to your smartphone.

4.1 out of 5 stars
4.1 out of 5
782 customer ratings
How does Amazon calculate star ratings?
Amazon calculates a product’s star ratings based on a machine learned model instead of a raw data average. The model takes into account factors including the age of a rating, whether the ratings are from verified purchasers, and factors that establish reviewer trustworthiness.

Lost in Paradise
5.0 out of 5 stars Just about as good as the rest
Reviewed in the United States on September 21, 2017
Verified Purchase
SUMMARY: At least $30 (probably more) less than Nest, a much better picture than nest (night vision also), and gives you 2 days (up to 1GB) of cloud storage for recordings.. I dig it.

I'm giving it 5 stars, it might be more like 4.7 but I'm thinking the things that it needs will be added in software updates.

I bought the nest 2 weeks ago and was underwhelmed. This is much cheaper (though I got the nest on sale for $160... it's still $30) and gives you 2 days (up to 1GB) of cloud storage for free. That right there is what makes it worth it because every other cam (worth having) requires a subscription after a trial period. Everybody wants a piece of your monthly money because it's practically guaranteed income when people forget they pay for it.

The quality of the product is MUCH better than nest was (I also have a pretty good foscam spy camera that records to SD, Kasa Cam wins against that, too).

Setup was a piece of cake, but to be fair I'm pretty technical.

I do understand the other reviewers issue about the white cord, but ultimately I think they went that route because of the probability people will run this camera somewhere where the wire will be against a wall... and there is an abundantly more amount of white trim/light color walls (or just walls that look better with white than black). Even if you're hiding the camera, odds are the wire will be hidden also. So, the times when a black wire would be a better choice are minimal and it's just easier to let the user use one of the thousands they have lying around.

It only lets you schedule the 'on/off' setting, i.e. when you go to work. Nest has a location setting where if you're home it won't notify you. So Kasa will basically shut off or turn on at times you designate... Nest you could leave on all the time but then not get notified constantly while at home; meanwhile when you are out on a random trip you'll get a notification saying there was motion. To achieve this with Kasa you'd have to turn it off then turn it on when you leave. Again, I think a software update to the app will come out and fix this.

Also, it doesn't appear that is linked up to Google home yet (which would make the above issue a little less taxing)... but again, I'm sure it's incoming given all their other stuff is linked.

I think that's it.

Gordon G
5.0 out of 5 stars A hidden gem among WiFi cameras
Reviewed in the United States on November 14, 2017
Verified Purchase
I first purchased a Philips home security camera - two of them - when they were just coming out and very expensive. The image was terrible and they had no night vision. Generally, they weren't worth the money. It soured me on buying anything new for quite a while.

But when the TP-Link came along with a reasonable price and a familiar quality, I joined their beta program and tried it out. I continue to be amazed by the image quality. I can zoom in (using my iPhone's accessibility zoom) to quite large and eavesdrop on my little, old cat while she investigates things she shouldn't and I can even talk to here although she ignores me. I was in the hospital and had some friends take care of my cat and was able to direct them via the camera and our voices as to where things were and what lights to leave on. I also had to allow a pest-check company have a look while I wasn't there and could not only see everything they did (they were perfectly professional) but also hear everything they said.

For the price, this camera is a find and it can also record based on sensitivity zones small enough to catch my cat climbing into the kitchen cupboards. It's well worth your time if you have such a need.
Read more
78 people found this helpful
Helpful
Comment Report abuse

Dr J A Marquis
5.0 out of 5 stars I plan to purchase at least one more, to expand and complete my security coverage!
Reviewed in the United States on November 16, 2017
Verified Purchase
After spending weeks researching home 1080p security cameras, I decided to give the TP-Link Kasa Cam a try. My decision to do so was helped along by the fact that I am a (very satisfied) user of TP-Link smart Wi-Fi switches and plugs. I really couldn't be happier with the Kasa Cam. It does take a bit of trial-and-error to establish placement, orientation and sensitivity levels (as with any camera of this type). Once that was taken care of, the camera's performance has lived up to everything good that's been said about it in user reviews. I experience few false triggers, few missed triggers, quick response and very short lag times. Low light "reach" and performance in near-total darkness is very good. I highly recommennd the TP-Link Kasa Cam KC120.
Read more
56 people found this helpful
Helpful
Comment Report abuse
See all reviews from the United States

LoveGadgets
4.0 out of 5 stars Missing some big basics but a decent security camera but expect more at this price point
Reviewed in Canada on November 20, 2017
Verified Purchase
I have updated my review and ranking on this camera due to some recent changes in the app etc.

I really wanted to like this camera. I have tested 6 different cameras that are this style, some that have tilt and pan and a couple that are static like this one. I think that with some app improvements they can take this to 4 or 5 stars very easily.

The good - Really easy to set up via the app and having it integrated with my other TP Link devices is great. Video quality is good as well. Setting a schedule is quite intuitive and easy to do. You can also easily add zones that you want covered and customize them from the app.

The not so good -
Using a white cord from the other TP Link cameras instead of providing a black one that matches the camera is a small issue but points to the fine points of product execution.
The main reason why I won't consider another one of these right now if the app itself that has several things that limit this camera compared to some others. It will not email you a snapshot of the event that triggered an alarm, this means you have to go to the app and play the video segment from start to finish to see it was a spec of dust floating in the air at night that triggered the motion sensor (yup.. dust even on normal setting). It would be nice to have a 3 to 6 frame shot that most other even cheaper cameras have.
No zoom at all... come on TP-Link, this is a $200 camera and I have to download to my phone to zoom in to see details, not acceptable at this price point.

If they fix some of these basics I think this would be a good choice as it integrates into the TP Link world well... in the short term I will continue to look for other options available.
Read more
23 people found this helpful
Helpful
Sending feedback...
Thank you for your feedback.
Sorry, we failed to record your vote. Please try again
Report abuse

memailer
5.0 out of 5 stars Excellent.
Reviewed in the United Kingdom on September 5, 2018
Verified Purchase
Works perfectly. Easy to setup. Very reliable to use.
Read more
5 people found this helpful
Helpful
Sending feedback...
Thank you for your feedback.
Sorry, we failed to record your vote. Please try again
Report abuse

L. Hazerd
3.0 out of 5 stars Great
Reviewed in Canada on January 15, 2018
Verified Purchase
Got several cameras from amazon and all were crappy always something wrong. This one is awesome, I got it for my room because i dont trust the people I live with. It has montiom sensor, records when motion is detected. One huge minus is the 10s recording. It is possible to trick the camera by activating the sensor wait 10 s and then steal what you need to. Same problem as the Kuna camera lamp. Let me point out, a person would have to know this to do this. Also unfortunately it sometimes also returns an error in recording. It happens more then i like but i cant find anytbing better for a reasonable price.
Read more
3 people found this helpful
Helpful
Sending feedback...
Thank you for your feedback.
Sorry, we failed to record your vote. Please try again
Report abuse

DingFang
1.0 out of 5 stars Don’t buy this
Reviewed in Singapore on January 1, 2020
Verified Purchase
It doesn’t work.

I placed the camera right next to the router at home.

When I’m outside, the live view doesn’t work.

The activity shows there are video clips recorded the movements. But when I try to play back, 90% of the videos can’t be played. Only those clips with 1 or 2 seconds can be played.

Posted the question on TP-Link forum also nobody respond.