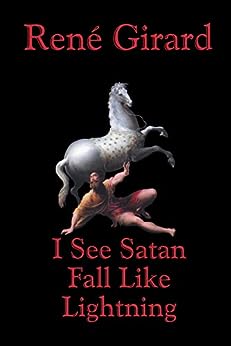 Enjoy a great reading experience when you buy the Kindle edition of this book. Learn more about Great on Kindle, available in select categories.
A seminal work on the astonishing power of the gospel by one of the most original thinkers of our time.
Read more
Previous page
Next page

Richard B. SchwartzTop Contributor: Philosophy
TOP 500 REVIEWERVINE VOICE
5.0 out of 5 stars An 'old-fashioned' book even more relevant today.
Reviewed in the United States 🇺🇸 on December 6, 2019
Verified Purchase
This is a complex book, straightforward in its argument but difficult in its execution.

What is the argument? I will try to be succinct. RG argues that if we want to understand theology we should begin with anthropology. If we can understand man we will have a better chance of understanding God. What is the primal experience of man? Human sacrifice, which eventually softens into animal sacrifice. Why do we sacrifice people? Because our world is one of envy. We see individuals who have things we want or who have done things that we would like to do. Our interpersonal relationships are based on modeling and this (role-) modeling results in conflict which is eventually dissipated by violence. We come together, sacrifice a single individual and, collectively, all feel better. This is related to scapegoating, to the Aristotelian notion of catharsis and, in our own time, such phenomena as crowd-shaming and tribalism. Jesus' sacrifice looks like this in its outlines (He is subjected to the cruelties generally only visited upon the lowest of the low) but Jesus turns the entire process on its head. First of all, He is demonstrably innocent. Second, He does not simply disappear after His death and allow the public to feel good about themselves. He is resurrected. This changes the entire (Satanic) structure of ritual killings and presents man qua man with a totally different vision of experience. His sacrifice saves us and it saves us through actions done on our behalf, replacing the momentary catharsis that we experience as an angry crowd seeking blood sacrifice in order to feel part of the group rather than like individuals at violent loggerheads with one another. His salvific actions change us in authentic and essential ways, not in momentary, Satanic ones.

The argument is difficult because RG uses key terminology which is different from our usual understanding of the terms (e.g. 'mimesis' and 'scandal'); the terms are associated with their original meanings prior to biblical translations and the cultural accretions now associated with them. This is a recurring problem throughout the book but it is ameliorated by the translator's foreword, which clarifies the terminology and the core argument. That foreword is essential for understanding the book (i.e. if this is your first exposure to RG's insight/argument).

The second level of difficulty comes from RG's attempts to clarify his argument. Rather than employ the rhetoric of the philosopher, refining and refining his argument, he writes more like a literary critic, assembling example after example or reflection after reflection to add further parallels and analogies to the core argument. In some cases he sounds like a phenomenologist whose writing verges on free association. Since the core argument is complex the additional reflections/examples sometimes muddy the waters rather than clearing them.

The bottom line is that the book is ultimately lucid in its thoughts and purposes and well worth the attention of theologians, anthropologists and students of myth and ritual. It is a book that might have been written many decades ago but it is still completely relevant and pertinent today.
Read more
35 people found this helpful
Helpful
Report abuse

Kindle Customer237
5.0 out of 5 stars Phenomenal insights into sanctioned violence
Reviewed in the United States 🇺🇸 on August 22, 2015
Verified Purchase
Rene Girard has discovered the most insightful interpretation of a common, hidden but detrimental religious and social practice I have ever read. As a Biblical scholar with a Master's degree, I have read extensively on scriptural interpretations, doctrinal theologies, comparative religions, you name it, many in their original languages. But Girard hits the nail on the head with his understanding of the social and religious practice of scapegoating. According to Girard, humans, like all creatures, developed by imitation. Homonids became "ultra imitators" as they became more and more human. This led to chaos as everyone became indistinguishable because they imiated each othet so well. The answer to this chaos was scapegoating. An individual or group was singled out through whatever criteria (some superior quality? some inferior quality? freckles? who knows?) and scapegoated. These scapegoats were then killed in order to pacify the stress felt by the rest of society. This pattern was then repeated again and again throughout human history. According to Girard, through this process, culture developed. His justification for this theory is that every society has a creation myth that begins with a chaotic world which is brought to order through violence.
I could go on and on with his eye-opening ideas, but I want you all to enjoy the book. I just gave a taste so you can get a feel for his insights. He does eventually get to the religious aspect of this scapegoating process which, to my mind, exists not only in religious circles but in the secular world, such as politics and corporations and offices everywhere, and even in dysfunctional families. (Is someone the black sheep in a family, the one who gets continual family disapproval but somehow never manages to be disowned or completely cut off from all contact with the family? Why? Because the dysfunctional family system needs the scapegoat to blame all family dysfunction on). As you can see, the adaptations for Girard's insights are not just evolutionary or religious.
One caution, however, the writing, while very fascinating, can be scholarly and thick, requiring some rereading and pauses to contemplate.
Read more
19 people found this helpful
Helpful
Report abuse

D. Hennigar
4.0 out of 5 stars Stimulating
Reviewed in the United States 🇺🇸 on November 21, 2021
Verified Purchase
Hard to read but intriguing...satisfying in its cutting edge theory of Satan; methodically explores/defines/explains Christianity's performance/complicity in violence. Still lends credibility of Scripture (and value of Christian faith) but from an anthropological perspective that supports the faith perspective. Have had to re-read it and watch videos for help comprehending. Worth the effort if you seek a deeper sense of aligning with the Bible in whole.
Read more
Helpful
Report abuse

Redhammer
5.0 out of 5 stars Profound Insight into Human Behavior
Reviewed in the United States 🇺🇸 on March 21, 2022
Verified Purchase
The author explains why scapegoats are so necessary for social cohesion and how that mechanism is driven by memetic desire. All politics can be understood in this conception.
Read more
One person found this helpful
Helpful
Report abuse
See all reviews

LitMan
5.0 out of 5 stars Classic and sublime
Reviewed in the United Kingdom 🇬🇧 on July 8, 2017
Verified Purchase
This book by Rene Girard explores passion and the devil. If ever passion made sense to the common people this is it. Girard's genius intuition of the dynamics of human groups and his interpretation of passion make more sense than anything I read or heard before and glorifies the divine in a brilliant way.
Read more
One person found this helpful
Report abuse

Nathan
4.0 out of 5 stars Describing the victory of the cross in an way that makes sense to history
Reviewed in Canada 🇨🇦 on May 16, 2020
Verified Purchase
I See Satan Fall like lightning is first and foremost a anthropological study of biblical texts and Christian traditions. His goal is to show the unique role of the Gospel texts in exposing the parasite of satanic power on human order from the foundation of the first human society, through the persecution of the prophets, to finally the crucifixion of Jesus Christ. His method is to show the biblical tradition of exposing human violence in siding with, and telling of the story of the victim. In contrast, he shows that it is exactly the hidden story of the victim that otherwise produces mythology in the ancient world (there are a few examinations of myths). Girard finds in the Gospel narratives the secret hidden in mythology and human religious ritual - hidden violent social order resulting from rivalry between individuals and communities that periodically expels itself on a scapegoat victim. It is the revelation of violent social order inherent in the "principalities and powers" and the "prince of this world" found uniquely in the Gospel texts, that Girard uses to account for the modern disintegration of archaic religion and the modern concern for victims.
Read more
Report abuse