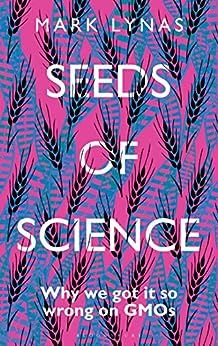 Seeds of Science: Why We Got It So Wrong On GMOs Kindle Edition

". . . full of factoids that’ll make you rethink a highly debated subject, and also what’s really going on with those giant apples that don’t bruise or brown." - Bonappetit.com

"Lynas may have been brash and insistent in the past, but here, he is deliberate, thoughtful, and committed to setting the record straight regarding GMOs." - Booklist

"Partly a level-headed look at the benefits as well as the downsides of genetic modification, and partly a personal account of how Mark came to believe that the scientific method was, on the whole, not a bad way of analysing questions of crop production and farming. I found it riveting, largely because he writes so well and so open-mindedly, and I warmly recommend it." - Philip Pullman

"Mark Lynas tells the remarkable story of a mass delusion fuelled by primitive folk-science intuitions, sacred values, and disinformation from some of our most sainted organizations. His exposé is an important contribution to an issue with enormous potential for benefiting humanity, and a gripping account of the tensions that can surround technological progress."- Steven Pinker, Johnstone Professor of Psychology, Harvard University, and the author of The Better Angels of Our Nature and Enlightenment Now

"A gripping story of how a passionate troublemaker became an equally passionate campaigner for the facts. Seeds of Science is not only a compellingly-researched argument, it is the tale of how Mark Lynas's life changed. Reading it may change your life, too." - Tim Harford, author of Fifty Things That Made the Modern Economy and presenter of More or Less

"Mark Lynas is a courageous writer whose evidence-based turnaround on GMOs should be a lesson to all environmentalists. A must-read for anyone who cares about our future." - Simon Singh, popular science writer and author of The Simpsons and Their Mathematical Secrets

Mark Lynas is a journalist, campaigner and broadcast commentator on environmental issues. He is a contributor to the New Statesman, Ecologist, Granta and Geographical magazines, and the Guardian and Observer in the UK. He lives in Oxford, England. --This text refers to an out of print or unavailable edition of this title.

bobbym
5.0 out of 5 stars MUST READ for ALL CONCERNED ABOUT GLOBAL WARMING
Reviewed in the United States on June 8, 2019
Verified Purchase
As a physician and scientist I found this book highly informative. It stresses FACTS and RESEARCH rather than hysterical and unfounded opinion. Those who accuse the Republicans and Trump of using the term "alteranative facts" should examine their own behaviors when it comes to GMO's (or more appropriately GM's or GE's). I do not work for any corporation and have actively fought medical device corporations and pharmaceutical companies regarding therr subversion of medicne. But I don't want to stop beneficial technology because these pirates subverted it! Greenpeace and others: If you have to lie and slander, then you don't have a valid arguement. THINK ABOUT WHAT YOU DO! BE CRITICAL and SCIENTIFIC!
Read more
2 people found this helpful
Helpful
Comment Report abuse

Bioengineer
5.0 out of 5 stars Outstanding analysis with scientific rigor
Reviewed in the United States on October 16, 2020
Verified Purchase
This is a comprehensive treatise on the issues surrounding GMO foods. The author of this book has intimate experience on both sides of this controversial issue. The book provides an in-depth scientific analysis of the benefits and potential hazards of GMO foods. The author obviously understand proper scientific method and appropriate statistical analysis. The book is well annotated with references to source material. A must read for everyone who eats.
Read more
Helpful
Comment Report abuse

Denise Dickeson
5.0 out of 5 stars Take a deep breath and let go of your previously held beliefs.
Reviewed in the United States on July 18, 2018
Verified Purchase
A scientific look into needless fear of technology. I learned so much from Mark. It was recommended by several of my science sites.
Read more
2 people found this helpful
Helpful
Comment Report abuse

JohnRH
5.0 out of 5 stars Fascinating review of GMOs
Reviewed in the United States on September 11, 2018
Verified Purchase
A fascinating review of GMOs, Monsanto and the various campaigns to stop them being used, despite their advantages. Mark's discussion of group think was very interesting - why members of a group persist with a view which seems counter to their world view.
Read more
Helpful
Comment Report abuse

Richard A Steeves
4.0 out of 5 stars Science prevails over fear of GMOs (genetically modified organisms).
Reviewed in the United States on September 18, 2018
Verified Purchase
Mark Lynas is a skilled writer, and his style and rigorous analysis did not disappoint me.
However, I didn't find the subject matter as interesting as his books about climate change and nuclear energy.

Knowlengr
VINE VOICE
5.0 out of 5 stars First Read to De-Demonize GMO, then to hear a Contemporary Account of Science Struggling to be Heard over the Noise
Reviewed in the United States on April 22, 2018
Vine Customer Review of Free Product( What's this? )
I was among the throngs in the 2017 Science March in Washington DC, which according to the Wikipedia authors included as many as 100,000. Other marches around the world were also well-attended. Washington's Peoples Climate March the following week was twice as large. Yet both marches saw an abundance of anti-GMO signage,with seemingly far less genetic engineering advocacy. The contradictions were jarring.

Lynas, a former anti-GMO activist, does a creditable job to retrace his shift of opinion and to give all sides -- even the much-maligned Monsanto -- a fair hearing with appropriate context.

In doing so, Lynas elevates SEEDS OF SCIENCE to a higher level; this is a book Dean Schooler

Science, Scientists, and Public Policy, 1971, 338 pages with illustrations.  or Thomas Kuhn  The Structure of Scientific Revolutions  might appreciate.

1. It demonstrates that evidence-based progress in science is deeply affected by organizational, political and social factors.
2. It shows that scientists are not immune to emotional adherence to opinions whose basis can erode beneath them.
3. It shows that despite polarization and rigidity in other sectors of society, within science it is possible for minds to be changed, and for science to advance, albeit along a jagged path. (Lynas cites Stewart Brand's seminal remark that ".. . the environmental movement has done more harm wtih its opposition to genetic engineering than with any other thing we've been wrong about" -- from

Whole Earth Discipline: Why Dense Cities, Nuclear Power, Transgenic Crops, Restored Wildlands, and Geoengineering Are Necessary .
4. It demonstrates that professional and government associations can be important, if not universally persuasive. Lynas cites the AAAS, WHO, AMA, National Academy of Sciences, British Royal Society among others -- as influencing his own views and helping to advance lay education broadly.
5. Lynas indirectly warns that even as international groups edge toward open science, more flexible peer review, and less medieval publishing practices, even well-funded sources can be denied an equal voice. They can simply be shouted down, as has been done across the European Union.
6. It shows how the confounding of multiple causes and consequences can lead to faulty populist reasoning, such as connecting GMO restrictions with the well-intended pesticide restrictions of the organic farming movement, as shown by this typical Amazon product label


365 Everyday Value, Organic Wheat Square Crackers, 8 oz . A closer reading of Rachel Carson  Silent Spring , as Lynas argues early in this valuable analysis, should be undertaken by those on all sides of this fast-changing technology.
Read more

a customer
VINE VOICE
3.0 out of 5 stars gmo
Reviewed in the United States on October 27, 2018
Vine Customer Review of Free Product( What's this? )
The book is about how the author, Mark Lynas, turned from a rabid GMO-hater into a supporter. He describes how he was terrorizing businesses who were obviously wrong from his point of view. Then at some point he decided to find a scientific basis for hating GMO, and found very little to support his claims. He writes history of Monsanto, one of the big offenders, from their very beginning, including Agent Orange and Roundup, and Roundup Ready crops. The latter are seeds that were genetically modified so they will not be killed by Roundup, so farmers can spray Roundup on the fields and only the target crop will survive. If it was all of the story, it would be a horror and everyone would say so. But it is not. There are Bt crops that make them resistant to various pests, which means that farmers can actually stop spraying pesticides and we get cleaner food. Lynas describes many different such crops.
Then he proceeds to describe how he and his previous comrades made situation with GMO so hostile that now even those better ways to modify genes make people revolt.
What I did not like about the book, that though in most cases he writes as a normal human being, sometimes being a journalist comes through in its yellow ugliness. Monsanto should not be judged for past sins because some of the other big corporations employed former nazi chemists (who made chemicals for the gas chambers) after they were released from jail? How is it even related? Sensationalism is not the best way to write about scientific matters.

Mr. J. G. Halstead
5.0 out of 5 stars not what you might expect
Reviewed in the United Kingdom on October 10, 2018
Verified Purchase
Lynas recaps some of the common points against the anti-GMO movement, but the book is a surprise. He tries to reach out to to anti-GMO activists on their terms. I hope it works.
Read more
Report abuse

Dr. John A. Heddle
3.0 out of 5 stars GMO plants, especially in Africa
Reviewed in Canada on January 26, 2019
Verified Purchase
An interesting but rather repetitive mea culpa. Excellent descriptions about GMO plants and their risks and benefits.
Read more
Report abuse