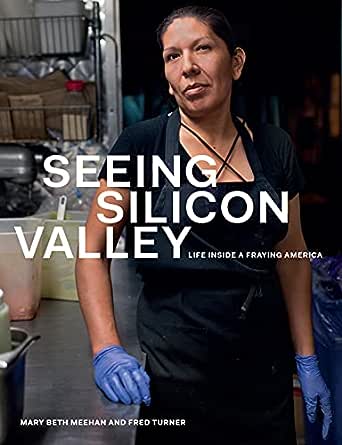 Flip to back Flip to front
Audible Sample Playing... Paused   You are listening to a sample of the Audible narration for this Kindle book.
Learn more
ISBN-13: 978-0226786483
ISBN-10: 022678648X
Why is ISBN important?
ISBN
This bar-code number lets you verify that you're getting exactly the right version or edition of a book. The 13-digit and 10-digit formats both work.

"[Seeing Silicon Valley] reveal[s], if not the future I thought I would find, a critical part of Silicon Valley that most people never look for or think about, let alone see. . . . Each photograph tells a story, and it's rarely the one you might imagine. . . . Insistently draw[s] the reader’s focus to how Silicon Valley's success and image are based on the outright elision of other bodies, often brown or black, or immigrant. . . . The people who cover 'tech'—whatever that term even means these days—too often portray Silicon Valley as a place apart from America. But, as Seeing Silicon Valley . . . reveal[s], with its racism, casual misogyny, economic inequality, and environmental devastation concentrated among poor communities, Silicon Valley is America. . . . [The book] point[s] to the heart of what makes the region run: people, many of them hidden or invisible. Making them visible is a start to creating a more praiseworthy place."
― Los Angeles Review of Books

"Brevity, succinctness, and personal focus are among the key strengths of this powerful and important book, an account that fans out into other developing narratives about the decline of California as America's paradise, social media's mendacity and lack of civic responsibility, and the super-charged rise of economic injustice and insecurity. It is likely to attract a lot of attention, discussion, and controversy. . . . The images are saturated in California sunlight and color and classically composed, suggesting the long heritage of Western portraiture. The various poverties they encompass do not immediately strike the eye, as [Walker] Evans' images do. The pain lurks below. . . . Unflinching."
― Arts Fuse

“It is a Silicon Valley rarely described and never shown that photographer Mary Beth Meehan sought to document. . . . Without descending into pathos, she reveals the striking contrasts between the world of start-ups and that in which their employees live. . . . But underneath, Meehan also depicts another, more subtle dissonance—between the way Silicon Valley sees itself, and the way it really is.”
― Le Monde

"Meehan focuses her lens on the forgotten faces behind the myths and the marketing. . . . From Brockton to Providence, from small-town Georgia to Silicon Valley, photographer Mary Beth Meehan is challenging communities to see themselves in new ways, spurring discussions about race and inequality, the economy and the environment."
― Boston Globe

"Seeing Silicon Valley spotlights people lost in the shadows of the tech capital. . . . Through their collection of around 30 portraits and mini-narratives of everyday people, Meehan and Turner take us through the unique lives of a swath of the region's residents who each struggle, in their own ways, to feel a sense of stability."
― San Francisco Chronicle

"Facebook, Google and hundreds of other companies that drive our digital lives call Silicon Valley home, but so do people who find it almost impossible to make ends meet, even if they are key to keeping billion-dollar industries running. In a new book, photographer Mary Beth Meehan presents a series of portraits that show another side of the people who power the world’s tech capital."
― Big Issue

"Meehan's photos dissolve distances between people. . . . [This] is a book of images that speaks to the human toll exacted by the relentless economy."
― Christian Science Monitor

"Meehan juxtaposes glimpses of the region's humanity with an unflinching view of the tech industry's unceasing ambition. . . . She asks readers to consider the costs of allowing the unrestricted pursuit of innovation to become ingrained in our society."
― Stanford Magazine

"For more than seven decades, business leaders, politicians, and would-be entrepreneurs have tried to unravel the secrets of Silicon Valley. In just over one hundred powerful, haunting pages, Meehan and Turner have captured a side of the valley rarely seen: the deeply inequitable landscape of contingent and disproportionately foreign-born labor that makes its high-tech magic possible. Humane, insightful, and deeply compelling, this book tells the story of Silicon Valley in a completely new and utterly magnetic way."
-- Margaret O'Mara, author of The Code: Silicon Valley and the Remaking of America

"Meehan’s photographs provide a compelling cross section of peoples and places in the valley, featuring hidden and untold stories. The photographs are excellent, the selection is clever and balanced, and the accompanying texts are well written and engaging."
-- Phillip Prodger, Yale University --This text refers to the paperback edition.

Mary Beth Meehan is a photographer known for her large-scale, community-based portraiture centered around questions of representation, visibility, and social equity in the United States. She lives in New England, where she has lectured at Brown University, Rhode Island School of Design, and Massachusetts College of Art and Design.
Fred Turner is Harry and Norman Chandler Professor of Communication at Stanford University. He is the author of several books, including From Counterculture to Cyberculture: Stewart Brand, the Whole Earth Network, and the Rise of Digital Utopianism.
--This text refers to the paperback edition.

4.2 out of 5 stars
4.2 out of 5
14 global ratings
How are ratings calculated?
To calculate the overall star rating and percentage breakdown by star, we don’t use a simple average. Instead, our system considers things like how recent a review is and if the reviewer bought the item on Amazon. It also analyzes reviews to verify trustworthiness.
Top reviews

Helen Gibbons
5.0 out of 5 stars A Book with Heart
Reviewed in the United States on June 11, 2021
Verified Purchase
This book shines a light on the dysfunctional aspects of Silicon Valley—problems that rarely make the headlines but affect all who live here. The people in the photographs and stories are portrayed with clarity and empathy. The book has a lot of heart, something Silicon Valley sorely needs.
Read more
3 people found this helpful
Helpful
Report abuse
See all reviews