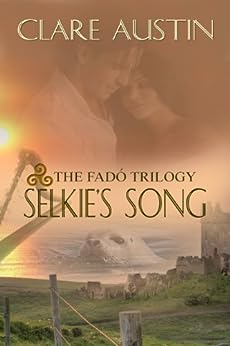 mayratg
3.0 out of 5 stars That Irish Thing
Reviewed in the United States on July 5, 2015
Verified Purchase
So I gave this book a rating of 3 stars because overall I enjoyed the story but the Irish thing was just a bit much for me. I understand the author was probably trying to be as authentic as possible towards the Irish part of the story but the accent/dialect just put me off a bit. I would definitely recommend this book to others but warn them on the Irish thing. On another note I must say I enjoyed learning about Ireland.
Read more
Helpful
Report abuse

Amazon Customer
5.0 out of 5 stars The folk of Fado
Reviewed in the United States on July 20, 2013
Verified Purchase
Another follow-up on the Folk of Fado. Clare Austin's clear awareness of the passion and joys of the female body and her honest assessment of the value of the reality of human need for that conjunction of two people, give Selkies Song a true and very Irish lilt that is often found in the music of the Emerald Isle. It is obvious that she herself MUST be a musician, for only a musician could feel the music she describes in Selkies Song.

I have read every thing Clare Austin has published and will automatically read anything she publishes in the future.
Read more
One person found this helpful
Helpful
Report abuse

craftylady1957
5.0 out of 5 stars Great Read!
Reviewed in the United States on May 31, 2018
Verified Purchase
It kept my interest and read easily. It was a great story. I believe I would've liked it to be a little longer.
Read more
Helpful
Report abuse

PonyGirl
5.0 out of 5 stars LOVE IT!
Reviewed in the United States on January 26, 2015
Verified Purchase
Love this author. Great storyteller. All 3 books in the trilogy was well worth the money. Highly recommend if you enjoy a good read.
Read more
Helpful
Report abuse

Mary McWay Seaman
5.0 out of 5 stars Moral struggles, economic challenges and tortured romance on a magical landscape!
Reviewed in the United States on February 14, 2014
Ages ago, along the western cliffs of Ireland, Patrick Conneely buried a sacred item within the roots of a whitethorn tree near the ancient fortress of the O'Malley clan. This long-lost treasure relates to the selkies - the mythic creatures of Celtic folklore who shed their skins on shore to become human on land; when they return to the sea with their sealskins, they revert to being actual seals again. Selkies are the stuff of legends to this day, and Clare Austin's novel weaves in contemporary moral struggles, economic challenges and tortured romance onto a magical landscape laden with selkie lore. What could be better?

Muireann O'Malley knows that a planned industrial fisheries project will devastate the coastal area around her home, killing off many birds and seals. Muireann's mother is a Conneely, and old legends hold that the Conneelys' ancestral kin were selkies. Meanwhile in Boston,Tynan Sloane (from Ireland) is planning to buy a bar with the proceeds from the sale of property in West Clare, Ireland, left to him by a deceased relative, Albert O'Malley. Albert had told Muireann that the key to saving the place was buried there.

And so, in lovely bursts of descriptive, melodic prose, Austin deposits Tynan back in Ireland where he encounters his old sweetheart, Muireann, who is unaware of the purpose of his visit. She soon learns that he is the unknown someone with a claim on the place, and that he wants to sell to the fisheries consortium. At this juncture, readers must prepare for total immersion into the complex mysteries of contemporary western Ireland - a region where the ancient world is merely steps away.
Read more
One person found this helpful
Helpful
Report abuse

T Forbes
5.0 out of 5 stars Excellant Story
Reviewed in the United States on November 3, 2013
This final installment of Clare Austin's Fado Trilogy was as thrilling as the others. She draws you in and keeps your attention until the very last page. It was a perfect mix of sensuality and mystery. I look forward to the next book this brilliant author will create.
Read more
One person found this helpful
Helpful
Report abuse
See all reviews
Back to top
Get to Know Us
Make Money with Us
Amazon Payment Products
Let Us Help You
EnglishChoose a language for shopping. United StatesChoose a country/region for shopping.
© 1996-2021, Amazon.com, Inc. or its affiliates