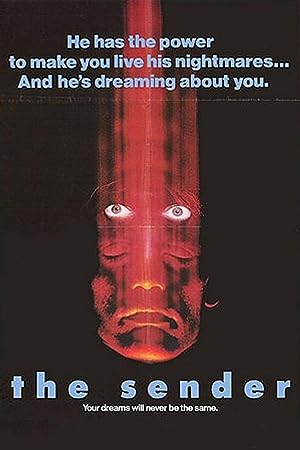 (81)
6.01 h 31 min1982R
A disturbed telepathic man is able to transmit his dreams and visions into the minds of the people around him.

Avid readerReviewed in the United States on May 5, 2020
4.0 out of 5 stars
Mommy issues
Verified purchase
It starts with John Doe 83 walking into a lake to kill himself, rescued and being sent to a State Hospital. He doesn’t know who he is. There is telepathy involved, and hallucinations that are all too real for the person seeing them, but really don’t exist, or do they? That is nicely crafted. The movie is slow paced, but that also allows the story to unwind slowly. The presence of his mother plays a role, yet is she real? There is one surgery scene that is not for the squeamish but it doesn’t last long. The movie keeps a person involved as to where it is going.
One person found this helpful

IDontKnowReviewed in the United States on June 27, 2010
5.0 out of 5 stars
The Sender
Verified purchase
It is criminal that many smaller films are so vastly overlooked in the genre, when they display so much creativity and individuality. THE SENDER is one of these films. Its extra-sensory plotting expands on the basic premise of PATRICK while juxtaposing dreams and reality in the same ways that A NIGHTMARE ON ELM STREET and BAD DREAMS would in the years to follow. A telekinetic teen is admitted to a psychiatric hospital after a failed suicide attempt, where his unbridled powers are unleashed upon the medical staff as they try to contain his violent psychic eruptions. John Doe transposes his nightmares on anyone within a close proximity, but director Roger Christian introduces this concept through slow and subtle shifts in the victims' perception of reality, making it impossible to tell when (or if) these nightmares have set in. The level of tension is increased by the fact that John's powers are never given any boundaries, making it uncertain whether his mind can cause the same external damage as his genre brethren Carrie White or Charlie McGee. This is best demonstrated on screen in the brilliantly filmed electro-shock therapy session, where the jolts of electricity cause explosions of psychic energy that are able to throw the doctors across the room, while also driving the other patients mad with visions of death and destruction. Zeljko Ivanek portrays The Sender as a sad and lost character, a boy trapped in a man's body whose oppressive mother has tortured his entire being. It is a very down film, with no lighter moments of comedy or romance to break up the depressing tone. THE SENDER continues to remain undiscovered by many Horror fans, but this undermentioned 80s gem is sure to find a much larger audience now that it is finally available on DVD.

Air Force BratReviewed in the United States on August 30, 2020
5.0 out of 5 stars
Clever
Verified purchase
I really liked this movie! Loved that it introduced Mr. Ivanik. He's a fine actor now, and was adorable as a young man. Movie kept you wondering what was real and what was not. Worth a watch!

D. krusoReviewed in the United States on August 29, 2015
4.0 out of 5 stars
... JUST MISSES.
Verified purchase
Love this movie... but could only give it 4 stars. Picture: REALLY good. Some dirt specks... but not bothersome. But the sound: TERRIBLE ! Had to pump the volume to 40 to hear the dialogue ... and then... about break my thumb when the music / sound kicked in. PICTURE: 5; SOUND: 3. OVERALL:: 4
One person found this helpful

Phillip Lupo JrReviewed in the United States on February 26, 2013
4.0 out of 5 stars
Held up pretty well.
Verified purchase
I remember seeing the trailer for this film at the theater when I was kid and it scared the hell out me (in a good way) and I couldn't wait to see it. I felt the same way again when I found it on Amazon. This moody, psychological thriller still holds up pretty well today.
One person found this helpful

FranciReviewed in the United States on February 6, 2009
5.0 out of 5 stars
Classic
Verified purchase
This film is original, very creative, and absorbing. It has a very well done surreal creepy atmosphere. It's one of those movies that pulls you in and keeps you there, and the ending has a nice twist too.
What a treat to see this finally out on dvd!
If you like the best of the eighties films, don't miss this one.