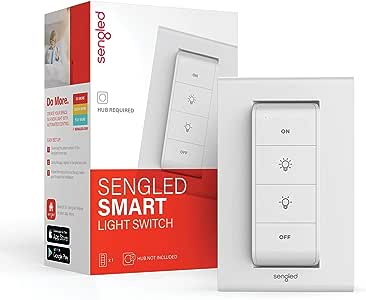 Visit the Sengled Store
4.2 out of 5 stars 568 ratings
Amazon's Choice recommends highly rated and well-priced products.
Amazon's Choice for "sengled switch"
Available at a lower price from other sellers that may not offer free Prime shipping.

The Sengled Smart Switch enables you to control your Sengled Smart LEDs with a click of the button. Mount it to your wall - no wiring required - or keep the remote close by for easy control. Add it to the Sengled Smart Hub, configure in the Sengled Home app, and with a couple taps, you'll have your favorite settings and scenes at your fingertips.

Use the Sengled Smart Light Switch and do more with your lighting. No wiring required; just mount it to the wall. Or, keep the remote close by for easy control. Set pre-sets in the Sengled Home app (iOS/Android) and dim and brighten with a tap of a button.

4.2 out of 5 stars
4.2 out of 5
568 global ratings
How are ratings calculated?
To calculate the overall star rating and percentage breakdown by star, we don’t use a simple average. Instead, our system considers things like how recent a review is and if the reviewer bought the item on Amazon. It also analyzes reviews to verify trustworthiness.

The Engineer
5.0 out of 5 stars Zigbee smart switch, rated for use with heavy duty appliances
Reviewed in the United States on July 31, 2019
Size: Smart PlugVerified Purchase
Ohm’s Law says: P=IE
Where P = power in watts, I = current in amperes, and E = voltage in volts.

When looking for a smart plug, that can handle a “heavy duty” appliance (first picture); it is important that you choose a plug that has an OUTPUT CAPACITY of 1,800 watts. The Sengled smart plug meets that requirement.
Ohm’s Law: 1,800 watts = 15 amperes * 120 volts

ALL smart plugs are rated ON THE WALL OUTLET SIDE for 15 amperes at 120 volts, but not many are rated for the full 1,800 watts on the controlled outlet side.

Not only is this smart plug compact; so is the packaging it comes in (second picture). All six sides of the box have printed information! And for the most part, setup is literally a “plug and play” experience (it’s SmartThings certified); so long as you don’t get excited, and just “plug it in,” before being prompted to by your Zigbee hub integration procedure. If you need to reinitialize the plug, simply hold the power button for 10 seconds, while the unit is plugged in. Also, DO NOT plug any appliances into the smart plug, until AFTER it has been paired to your Zigbee hub.

TeeJayN
5.0 out of 5 stars Easy to install - Works Great!
Reviewed in the United States on November 3, 2018
Size: Smart PlugVerified Purchase
I had already installed the Sengled starter pack which included the Sengled Element Classic hub. Adding this Smart Plug was easy and only took a minute or two. The plug works reliably and has a manual push on/off switch on the side that emits a soft blue light when on (see pic). I also added all my Sengled smart devices to Alexa and all work fine without issue.
Read more

M. Falcon
2.0 out of 5 stars Doesn't work with Sengled's Home app
Reviewed in the United States on November 22, 2019
Size: Smart PlugVerified Purchase
App recognizes it as a smart plug, but only gives the plug isolated on/off controls. App doesn't let you associate it with a scene, a schedule, a routine, or anything else you expect from a "smart" device. Just says "no devices available". I bought 3 of this switch, and one wall "smart switch", hoping they would go together and I could associate the switch to the outlet, and have a light switch for my room (which has no light switch in the wall, have to fumble for an in-line cord switch).

I seem to be one of a very small number of people actually using this fully within Sengled's ecosystem, with a Sengled hub, Sengled app, and Sengled switch. Unfortunately it looks like I'm gonna have to figure out how people are using it with the Samsung Smart Things app...

Update: tried Alexa support, I named the switch "Lights" and I say "Alexa, lights off" (as used to work with my Sengled Element bulb), and I get the absolute most infuriating response from Alexa: "LIGHTS DOESN'T SUPPORT THAT". What?!! What?!!! What DOES it support?! On and Off are the only two things this thing can do, and it doesn't support turning on and off?!! I'm going to have to return this entire piece of garbage... Updated to one star. Useless!

update: found that the reason for "lights doesn't support that" is that I had a group called "lights" in Alexa, as well as calling the switch itself "lights" in Sengled (so also imagine if you called it "bedroom", etc), and when I moved from a Sengled bulb to this Sengled switch, it left the group empty with no devices defined. Adding the switch to the group worked properly. However, because this switch is treated differently from a bulb in the Sengled system, I still can't associate the wireless light switch with it -- if I associate the switch with the group, and put this outlet switch in the group, it doesn't have any effect, doesn't work. So, this is still a 2-star product to me. A senseless, brainless limitation that makes zero practical sense and could easily be fixed with a software update.

Cat-Gun
1.0 out of 5 stars Be prepared to waste hours trying to set these up with your hub.
Reviewed in the United States on November 4, 2020
Size: 2 Pack Door & Window SensorsVerified Purchase
I've followed all the instructions. Stayed within 15 feet of my hub, made sure to be on 2.4g connection, reset countless times and kept trying. So far, since I got these two sensors a few hours ago, I've gotten 1 to set up. This is atrocious. The magnets in these are also super weak and can't be oriented in any way other than side by side, which is unfortunate. Luckily, I only need one in a nonstandard orientation and will be using the magnet from my old Wyze sensor instead since it is stronger.

Edit: I'm taking another star off. This product is abysmal. It doesn't work even half the time.
Read more
2 people found this helpful
Helpful
Comment Report abuse

TripleThreat117
5.0 out of 5 stars Great Value Door Sensors
Reviewed in the United States on May 4, 2020
Size: 2 Pack Door & Window SensorsVerified Purchase
I bought these at $26 a few days ago and for 2 door sensors, that's the best price I've seen for brand name sensors. They are half the size of my old GoControl ones and judging by the last few days of use, reliability and battery should both be comparable.

The only negative I'd say these have is that pricing (for now) on Amazon seems very inconsistent. I've seen them at $26, $27, $32, and now most recently, at $35 over the last few days. If you wanna save some money, keep an eye on the price - Anything under $30 I'd say is worth it but once you start hitting close to the $40 range, the Samsung door sensors also read tilt, vibration, and temperature for the same price.
Read more
16 people found this helpful
Helpful
Comment Report abuse

K. P.
3.0 out of 5 stars Probably other better solutions than this for almost every use
Reviewed in the United States on November 8, 2020
Size: Smart SwitchVerified Purchase
I am unsure how to feel about this dimmer. I am unsure if there is a word for simultaneously high end and low end but this device is that word. The dimmer looks really nice and feels really great when held in your hand. However, the mount/holder looks so weird, with bezelling on the side that is mounted. This looks extremely out of place. The device buttons are the real issue, they are absolutely terrible. They feel so cheap and only work when pushed exactly in one perfect way. I wanted to like this dimmer but the experience is just not good enough and there is no official SmartThings support so the device operates in the cloud. Overall, I just find the device to be lacking too much in high end qualities and having too much low end qualities. Replace the wall switch with a zigbee/zwave dimmer or get a zigbee/z-wave button.
Read more
Helpful
Comment Report abuse
See all reviews

AMPALME
4.0 out of 5 stars Great addition to Sengled smart family but lacks chime
Reviewed in Canada on August 10, 2020
Size: 2 Pack Door & Window SensorsVerified Purchase
I am glad that Sengled introduced door/window sensors so I don't have to buy another hub to connect. Within the app you can interconnect Sengled smart lights which turns on/off when sensor is activated. Easy to install. Make sure to keep reset button accessible while installing.

It lacks chime. Giving one less star because of that. It's useless for anyone who is visually impaired
Read more
Report abuse