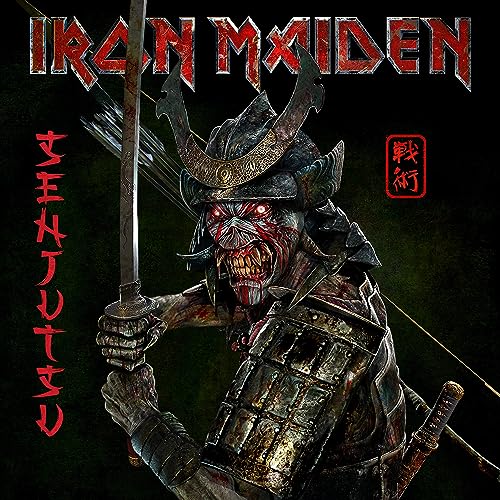 4.7 out of 5 stars
4.7 out of 5
42 global ratings
How are ratings calculated?
To calculate the overall star rating and percentage breakdown by star, we don’t use a simple average. Instead, our system considers things like how recent a review is and if the reviewer bought the item on Amazon. It also analyzes reviews to verify trustworthiness.

Sheila (NJ)
5.0 out of 5 stars Some of their best work, if not their best work
Reviewed in the United States on September 3, 2021
Verified Purchase
These guys are in their 60s?!

If you are an old fart head banger metal head like me...buy this album and a six-pack of Ensure to help you keep up with these guys.
Read more
17 people found this helpful
Helpful
Report abuse

P. A. Reese
4.0 out of 5 stars 3 Stars, but it's Iron Maiden!
Reviewed in the United States on September 3, 2021
Verified Purchase
Realistically, 3 stars for me. Pre-Ordered for The Writing On The Wall and the album cover alone. Unfortunately, that is where it ends for me. I tuned out on Maiden somewhere after Somewhere In Time. Still listen to the early stuff. My friends always picked up their stuff to follow, but I just never could get into it any longer. Then I heard their new single drop, and loved it. They took a different turn.
My favorites on here are as listed: 1 The Writing On The Wall, 2 Days Of Futures Past, 3 Stratego, and that is about it. The Time Machine, and Death Of The Celts are kind of cool. There is also some cool stuff sprinkled about here and there. Solo's and sound scapes and what not. There is no denying Iron Maidens' mastery though. Bruce's vocals still sound good, Steve Harris is still a monster, and the guitar work by the guys are still on fire. I loved the Smith & Kotzen album that dropped earlier on, and that led a hand in me giving it another whirl for these guys.
Just not into the long drawn out progressive tunes myself. I am more about the hook and groove, and keeping it there. So, with that being said, it is still Iron Maiden and I am sure many will enjoy this. I will load my top 3 from this effort in my playlists and enjoy them. Probably will put that album cover on my wall in the jam room too.
Read more
9 people found this helpful
Helpful
Report abuse

Mr. Sinister
4.0 out of 5 stars Maiden's Newest Addition To Their Vast Legacy
Reviewed in the United States on September 3, 2021
Verified Purchase
There's a few things going on. One, I pre-ordered the digital album and today, on the release date, I can't download it, which is odd. Two, why is the CD over $100??? Three, this late in the game for Iron Maiden, I'm not exactly freaking out. I have the first two singles, Writing On The Wall and Stratego, and I can say without hesitation that Bruce sounds very, very strained. The production so far is hit-or-miss (Statego sounds muffled in spots) and the lyrics aren't exactly blowing me away. That being said, I did pay for the album so I do expect to receive the album at some point. I'm irritated that I can't get the download but I'm not exactly having a heart attack over it. We shall see...

(Side Note: apparently the opening track is all about Japan and the Japanese art of drum-battling. I didn't get that, but that's the Japanese lynchpin that holds the cover concept together. The lyrics do mention 'the great wall' so I'm not sure if Maiden knows that that's China, not Japan. They should know that, right? Asia isn't just Japan. Ok.)
Read more
2 people found this helpful
Helpful
Report abuse

BrandonTop Contributor: Star Wars
5.0 out of 5 stars Deluxe Box Set Review
Reviewed in the United States on September 9, 2021
Verified Purchase
The deluxe box is worth it for the artwork.

This album has a huge amount of art that both features Eddie and does not and the art doesn't disappoint.

Inside you get a scroll and small mini-posters plus the Writing on the Wall DVD as well as the album.

There is an acknowledged mess up where the CD insert is the same as the Writing on the Wall DVD insert (basically you get two of the same) but there is a form to fill out to have the correct insert sent.

The album itself is outstanding. Every song is excellent. No, it is NOT Number of the Beast Part 17, but it is the continuation of the band's instrumental exploration.

Senjutsu is as good of an opener as they have ever had and they have had amazing ones (Sign of the Cross, If Eternity Should Fall, Aces High, Moonchild)

If the band ends on Hell On Earth they went out with a bang.

The deluxe box is an excellent keepsake. I recommend picking this up.
Read more
2 people found this helpful
Helpful
Report abuse
See all reviews