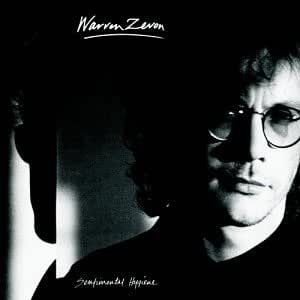 Share
Only 5 left in stock (more on the way).
Qty:1
Add to Cart
Buy Now

Secure transaction
Your transaction is secure
We work hard to protect your security and privacy. Our payment security system encrypts your information during transmission. We don’t share your credit card details with third-party sellers, and we don’t sell your information to others. Learn more
Details
Ships from
Amazon.com
Sold by
Amazon.com
Sentimental Hygiene has been added to your Cart

Warren Zevon Format: Audio CD
4.5 out of 5 stars 119 ratings
See all 17 formats and editions Hide other formats and editions
Includes FREE MP3 version of this album.&nbspProvided by Amazon Digital Services LLC. Terms and Conditions. Does not apply to gift orders.&nbspComplete your purchase to save the MP3 version to your music library.
Available at a lower price from other sellers that may not offer free Prime shipping.

Zevon staged a strong comeback with this 1987 LP, backed by all four members of REM plus guests Neil Young, Bob Dylan and George Clinton! Includes three bonus cuts, one of 'em unissued!

4.5 out of 5 stars
4.5 out of 5
119 global ratings
How are ratings calculated?
To calculate the overall star rating and percentage breakdown by star, we don’t use a simple average. Instead, our system considers things like how recent a review is and if the reviewer bought the item on Amazon. It also analyzes reviews to verify trustworthiness.

H Arthur James
5.0 out of 5 stars Excellent Album
Reviewed in the United States on August 5, 2018
Verified Purchase
I bought this on cassette back in 87 during my sophomore year in college. It is without a doubt my favorite Zevon album. It is full of angst and sorrow as well as a fair amount of self mockery. Whether you are looking for something to play in the background while you wallow in self pity or just want to rock out while driving 75 in a 55 zone you will find something on this album to suit your mood.
Read more
4 people found this helpful
Helpful
Report abuse

Allen Berry
3.0 out of 5 stars A decent Album, but the Best Tracks also appear on Genius
Reviewed in the United States on August 2, 2020
Verified Purchase
Warren Zevon's 1987 record (still sounds as fresh today and 33 years ago) is a decent record. It sports three of the songs that made it to Genius, Zevon's second Greatest Hits package, and the other tracks are quite listenable. However, the most Memorable Tracks are "Boom Boom Mancini," "Reconsider Me," and "Detox Mansion." If, like myself, you are seeking to acquire the entire Zevon Catalog, you'll want to grab this one up. If you're a less greedy, some might say unhealthily obsessed, fan of Zevon's work, you can get what you need from Genius.
Read more
Helpful
Report abuse

John S. Ryan
5.0 out of 5 stars Tied for first place, anyway
Reviewed in the United States on July 31, 2000
Verified Purchase
I don't have much to add to the other reviews, but since I just finished reviewing a couple of Zevon's other CDs I might as well weigh in. Besides, now that _Life'll Kill Ya_ is out, people might be looking into some of these older releases.

My two favorite WZ albums are his major-label debut and this one. _Excitable Boy_, a very close third (and currently duking it out with _Life'll Kill Ya_), has three or four of his best songs on it, but the album as a whole is a bit uneven (and, as another reviewer has remarked, too short). But there's not a weak track on _Sentimental Hygiene_.

Basically, it's the other three guys from R.E.M. (and Michael Stipe on one track) backing up WZ and some familiar Special Guests. The songs themselves are straightforward and extremely well-written; Zevon is in fine voice, he swaps off between keyboards and guitar and does brilliantly on both, and the production is solid throughout.

If you haven't been introduced to WZ yet, this is a good place to start. If you know only the Warren Zevon of "Lawyers, Guns and Money" and that pesky werewolf song, this CD will surprise and delight you. If you listened to him back in the 1970s but lost touch with him after _Bad Luck Streak In Dancing School_, this is where to reconnect. And if you've just picked up _Life'll Kill Ya_ and you're looking into some of WZ's earlier releases, _Sentimental Hygiene_ is probably an ideal choice.

As the title suggests, this is a very cathartic collection, with WZ's heart as close to his sleeve as it's ever likely to get. In addition to a large helping of straight-ahead rockers laced with his trademark wry wit, WZ also turns in a couple of downright gorgeous ballads -- "Reconsider Me" and "The Heartache" are two of my favorites here or anywhere.

I won't quite go so far as to bump this one ahead of _Warren Zevon_; the album that brought us "Mama Couldn't Be Persuaded," "Hasten Down The Wind," "Carmelita," and "Desperadoes Under The Eaves" will always be number one on my WZ list. But ever since 1987 it's had to share the top spot with this one.

Baljit S. Grewal
5.0 out of 5 stars One of his best!
Reviewed in the United States on August 4, 2020
Verified Purchase
I was lucky enough to see Warren Zevon in London on the back of the tour for this album. Wow! It was a brilliant show. And this is one of my favorite albums by him. It's a 5 star knockout. Marvelous songs. This record just flows beautifully all the way through.
Read more
Helpful
Report abuse

rodneyi2000
5.0 out of 5 stars Best mid- period Zevon album, awesome comeback
Reviewed in the United States on August 19, 2020
Verified Purchase
One of my favorite albums, R.E.M. sans Stipe, is all all over this, eventually leading up to Hindu Love Gods. Great memories for me, Zevon was back at it strong here, strong writing, strong singing, superb musician. Boom Boom Mancini, Reconsider Me, et.al. Just listen, aged well from an era that doesn’t always age well, no gated drum effects or excess electrictonics.
Read more

5.0 out of 5 stars Best mid- period Zevon album, awesome comeback
By rodneyi2000 on August 19, 2020
One of my favorite albums, R.E.M. sans Stipe, is all all over this, eventually leading up to Hindu Love Gods. Great memories for me, Zevon was back at it strong here, strong writing, strong singing, superb musician. Boom Boom Mancini, Reconsider Me, et.al. Just listen, aged well from an era that doesn’t always age well, no gated drum effects or excess electrictonics.
Images in this review

Dvr
5.0 out of 5 stars Wailin' Warren
Reviewed in the United States on February 25, 2011
Verified Purchase
Always been a big fan of WZ - though only owing "Greatest Hits", and his first release from 1978 - on vinyl. A few weeks back I heard the title track - "Sentimental Hygiene" on satellite. Rockin' song, with this blistering guitar solo. Turns out it's none other than Neil Young smokin' the guit box. And whole album is great. No "filler". Plenty of rockin' tunes, and soulful ballads.

The big surprise is that this album was recorded in 1987. Supposed to be his "comeback" album. Besides Neil Young; Don Henley, Brian Setzer, and Bob Dylan; plus a slew of other known musicians,also contribute. I'd never heard of this album, or any of it's songs. WOW - what a treat to find this little gem.

With Warren gone - tragic loss - there obviously hasn't been any new WZ music for quite a while. If you are a casual fan, but maybe looking for some "new" WZ - this album is a must. This album smokes......but has some nice cool ballads.

JoeB
5.0 out of 5 stars Sentimental, for sure
Reviewed in the United States on May 17, 2009
Verified Purchase
Working on a Warren Zevon session was not as crazy as one might think. I was doing overdubs on a project that would later become Warren Zevon's Sentimental Hygiene. Niko Bolas was the main engineer on the session and I was a big fan of his work. I did simple overdubs on the sessions and yet those days were magic for me. Reconsider Me, was the one song that has stayed with me and perhaps always as a profound musical piece of the soul. This record will be the only time (as brief as it was) I've gotten close enough to Warren to shake his hand and smile to the music he created that day in the studio. I am a Warren Zevon fan and will always be.
Read more
14 people found this helpful
Helpful
Report abuse

Alanna
5.0 out of 5 stars Sentimental Hygiene
Reviewed in the United States on July 20, 2014
Verified Purchase
Now this is a much better album from Zevon. This is a remastered CD with two bonus tracks at the end. I love every song on this
with the exception of the two bonus tracks. I guess they aren't my taste but, this CD is worth what you pay for it.
My favorites are 'The Heartache', 'Boom Boom Mancini', 'Reconsider Me', 'Detox Mansion' and the title track 'Sentimental Hygiene'
A must have for all Zevon fans.
Read more
3 people found this helpful
Helpful
Report abuse
See all reviews

Mr X
5.0 out of 5 stars Great stuff
Reviewed in the United Kingdom on May 19, 2020
Verified Purchase
I got into Warren rather late via a best of with Werewolves of London as the stand out track.It also featured a number of songs from this album, so there was a certain familiarity to it. Suffice it to say the tracks that were previously unknown to me are blinding stuff.
Read more
Report abuse

Am Williams
5.0 out of 5 stars his best since the early years
Reviewed in the United Kingdom on February 9, 2014
Verified Purchase
stellar line up on mass to support the great man, dylan, neil young, all of rem(stipe gets a backing vocal credit). particularly like bad karma(typically sarcastic) and the springsteen mickey take of factory. The ballads are all sympathetically done with you usual levels of zevon darkness. The mans a legend and masively underrated. brilliant.
Read more
4 people found this helpful
Report abuse

banginon
5.0 out of 5 stars under rated genius
Reviewed in the United Kingdom on October 31, 2013
Verified Purchase
this guy is up there among my favourite artists of all time he is an exceptional writer and musician who never really got the recognition he deserved sentimental hygiene was the first album I ever heard of his and now I own everything he ever recorded wish he was still with us god bless warren zevon
Read more
4 people found this helpful
Report abuse

Peverley
5.0 out of 5 stars Five Stars
Reviewed in the United Kingdom on October 4, 2017
Verified Purchase
another great album for my zevon cd collection,
Read more
Report abuse
See all reviews