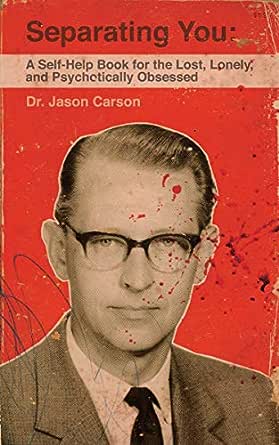 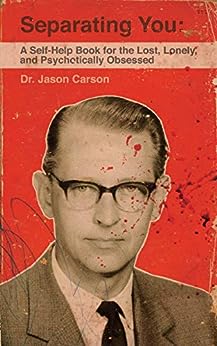 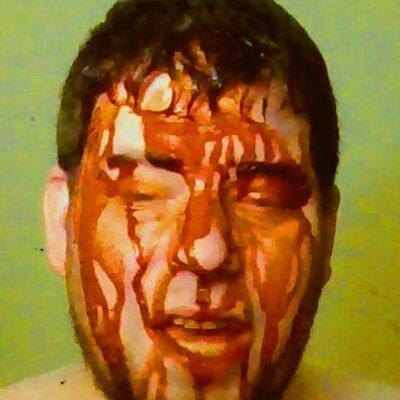 Separating You: A Self-Help Book for the Lost, Lonely, and Psychotically Obsessed Kindle Edition

"Though not for the faint of heart, this psychological portrait is as entertaining as it is disturbing." - Publishers Weekly

4.0 out of 5 stars
4 out of 5
25 global ratings
How are ratings calculated?
To calculate the overall star rating and percentage breakdown by star, we don’t use a simple average. Instead, our system considers things like how recent a review is and if the reviewer bought the item on Amazon. It also analyzes reviews to verify trustworthiness.

Edward Z
4.0 out of 5 stars Not all heroes wear capes. Some are serial killers.
Reviewed in the United States on November 29, 2019
Verified Purchase
Yes, that's right, a self-help book by a serial killer to you, his potential disciple. I'm sure nothing can go wrong.

Dr. Jason Carson takes us step by step telling us how to be more like him. Well at first he does. He often goes on ego-driven and way, way out there tirades on how he is God and you are a stupid weak person for believing him. Which is fine, you the (fictional) reader certainly would be.

He divides the world into two types of people, Heroes, and Victims. Naturally, he is a Hero for the things he does. Taking what he wants and savoring living. As he gives his lessons and manipulates the reader we see into a seriously messed up mind.

As this is satire (probably) it's very tongue in cheek at times, but switches back and forth from dark comedy to something quite disturbed at a moment's notice. He describes many violent acts against people and some very gruesome stuff about animals. It's not just the violence, he has many weird issues he goes on and on about.

He's obsessed with body parts, relishes the smell of rotting corpses, and glorifies charismatic con artists who use and abuse people to get what they want. He tells us stories from his life where he takes extreme lengths to get his kill such as losing a lot of weight to slip into the back of someone's vehicle.

There are sections where we take a little timeout and get a SURVEY where scenarios are presented to us and we are tested with three multiple-choice options based on what was said, one of course always being very bizarre and the "Hero" thing to do.

As it goes on he gives us a complete look into everything that made him how he is, even if he won't admit he was created that way by things that had happened to him and not born, or perhaps he just can't even comprehend that. Many of the typical tropes are in there but it's all cleverly shown to you.

The only problem this really has is that is it is limited by the very concept of it. It was not hard to guess what the outcome of his self-help would be and his ramblings get a little repetitive. But otherwise, it was very well written and done and the dark humor is enjoyable granted you can stomach the incredibly disturbing subject matter.
Read more
4 people found this helpful
Helpful
Report abuse

Chris Hansen
4.0 out of 5 stars The best “self help book” I’ve ever read
Reviewed in the United States on June 14, 2020
Verified Purchase
Let’s start with the warning. This book is ... sick. Absent it’s purpose it is utterly evil. And we should throw in a PTSD warning for those who struggle with abduction or death(s).

You have to read it - start to finish - to recognize its genius. A psychopath is going to take you apart, bit by bit. No more - or I’ll spoil it.

The omnipotent voice is that of a madman - who can justify his horrors using the trite phrases of the “Self Help” movement. And as he is torturing you he won’t stop talking about his superiority, and how you could be just like him, if you simply picked up the mantras of the movement. And then he explains the movement. And I can’t argue with his conclusions.
Read more
2 people found this helpful
Helpful
Report abuse

KWP
4.0 out of 5 stars Horror Like Nothing You've Ever Read Before!
Reviewed in the United States on January 21, 2020
Verified Purchase
This novel is part self-help; part sickening horror; and part warning that you should always stay aware of your surroundings, vary your habits, and keep your doors locked! I can't decide whether the author is a madman or a genius. To write from the perspective of a serial killer is an interesting (albeit horrifying) concept. To read from the perspective of student/peer/victim is at times difficult to justify. But to make it through this book without questioning your security - and the author's sanity - is downright impossible.
Read more
3 people found this helpful
Helpful
Report abuse

Brad Tierney
4.0 out of 5 stars Hey Baby.
Reviewed in the United States on July 19, 2020
Verified Purchase
This book is literally insane. Like, as in, literally insane literature. It’s awesome. I’ve never read a regular self-help book before, so I cannot compare it, but this book transcends horror fiction. It’s just so original, I’ve never read anything like it. You should read it. You’ll like it.
4/5 Skulls
☠️☠️☠️☠️
Read more
One person found this helpful
Helpful
Report abuse

Kimbok
5.0 out of 5 stars A Laugh of Mortification
Reviewed in the United States on September 5, 2019
Verified Purchase
You need to try this! It’s the only book I’ve ever read that caused my jaw to drop in mortification while a laugh escaped. Read it for yourself and let me know if you think the author is that good of a writer or is actually a serial killer, I can’t decide.
Read more
2 people found this helpful
Helpful
Report abuse

Daniel Forbes
5.0 out of 5 stars What a Thrill Ride!
Reviewed in the United States on December 1, 2019
Verified Purchase
No other book has made me laugh, and mortify at the same time. One moment you question your own sanity, and the next you have to pick yourself up off the floor cause you were laughing too hard. Just get the book and enjoy it.
Read more
One person found this helpful
Helpful
Report abuse

Zombie Inkpot
5.0 out of 5 stars Be less like yourself, become more like Ted Bundy
Reviewed in the United States on September 2, 2019
This is a difficult book to rate. For its dive into the spiraling, deranged mind of a narcissistic, psychopath with multiable antisocial personality disorders and an obvious past of trauma and abuse, it is a genius 5 stars. Throw away comments, rants about God and the intricacies of self deception are handled so masterfully that the potential road to becoming a serial killer is laid bare. Despite all that might or might not have happened in ‘Dr’ Carson’s life, it is the choices he has made that have resulted in him becoming the monster that he is. For all his horrible advice - and it is truly horrible - he remains human, albeit a human who has decided to turn his pain and suffering into hurting others.
As a self help book, the concept starts off in an amusing fashion, but the subject matter is so dark that this is not a quick read. It’s well written, the writing flows and it is not a very long book, however I had to read it in smaller chunks as I progressed through it. Brilliant, in many ways as this book is, Jay Carson’s mind is not a pleasant place to visit for long.
This is where my rating dilemma comes in. If I were rating the (fictional) author of this tome, it would be 1 Star.
A great book for those interested in serial killers, dark horror and the psychology behind people who embrace evil. Be warned, this subject matter is heavy going. If you’re looking for satire of self help books or a light read, this isn’t it.
Read more
5 people found this helpful
Helpful
Report abuse
See all reviews

Iain M Rodgers
5.0 out of 5 stars Highly original and funny
Reviewed in the United Kingdom on October 2, 2019
Verified Purchase
You might need a fairly strong stomach for some of the black, or sick, humour in this book but for those of us that have such a stomach, this book is a treasure.
It makes some serious points too (though that might just be me bringing my own pedantry to bear).
Read more
Report abuse
See all reviews