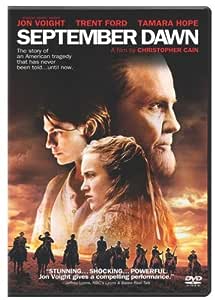 Academy Award(r) winner Jon Voight, Terence Stamp and Trent Ford star in this film based on the true story of the Mountain Meadows Massacre -- the brutal murder of 120 men, women and children on September 11, 1857 as their wagon train passed through Utah on its way to California. The question of whether the attack was carried out by local Paiute Indians or by a renegade sect of the Mormon church remains unresolved to this day. Set against the breathtaking beauty of the Utah mountains, September Dawn explores what might have happened when the ill-fated settlers stopped near Cedar City to rest before completing the last leg of their journey. Local Mormon Bishop Jacob Samuelson (Voight) is suspicious of the group, so he dispatches his oldest son Jonathan (Ford) to spy on them. Jonathan soon falls in love with an angelic member of the wagon train, the minister's daughter Emily (Tamara Hope), and is horrified when he discovers that his father thinks the settlers are enemies of the c

September Dawn is an unusual hybrid: a love story, a Western, a historical drama, and a statement against religious intolerance. The fit between the four parts is uneasy at best. Christopher Cain (Young Guns) begins in 1877 as Utah governor Brigham Young (Terence Stamp, making no effort to disguise his British accent) presents his side of the story. (The director's son, Dean Cain, cameos as Joseph Smith.) The narrative then returns to 20 years before: A Missouri wagon party seeks permission from Bishop Jacob (Jon Voight) to rest on his land for a fortnight before continuing to California. Jacob gives his consent, but comes to regret his hospitality; after all, the state of Missouri forced his people to flee in order to practice their religion in peace. Then his son, Jonathan (Trent Ford), falls for the "gentile" Emily (Tamara Hope). Jacob becomes convinced the travelers will corrupt his entire community if he doesn't take action, so he negotiates with the Paiute tribe to execute the lot of them, leading to the Mountain Meadows Massacre of September 11th, 1857. On that date, as many as 140 settlers were killed, some by Native Americans, some by Mormons. Though the movie may have been made to "set the record straight," it seems more likely to offend modern-day members than to provide catharsis for descendents of the victims. Suffice to say, September Dawn was not produced with the support of the Church of Jesus Christ of Latter-day Saints. --Kathleen C. Fennessy

Page 1 of 1 Start overPage 1 of 1
This shopping feature will continue to load items when the Enter key is pressed. In order to navigate out of this carousel please use your heading shortcut key to navigate to the next or previous heading.
Back
Next
Pages with related products. See and discover other items: led furniture, Explore felts for jewelry