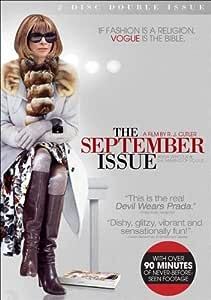 An intimate, funny and surprising behind-the-scenes look at VOGUE’S legendary editor-in-chief Anna Wintour and her team of larger-than- life editors, this is the captivating story of how they create the must-have bible of fashion: THE SEPTEMBER ISSUE. At the eye of this annual fashion hurricane is the two-decade relationship between Anna and Grace Coddington, incomparable creative director and fashion genius. Through them, we see close-up the delicate creative chemistry it takes to remain at the top of the fashion field. Now, with the biggest issue ever hanging in the balance, Anna and Grace confront the runways of Fashion Week, the back rooms of the world’s biggest designers, the high-stakes photo shoots – and each other – as the VOGUE team scrambles to find the perfect look for each page. Director R.J. Cutler delivers this riveting look into the world of fashion that is as fun, fabulous and fast-paced as the world it captures.

Fashionistas finally get a glimpse of the mastermind behind the lion's share of the American fashion industry, Anna Wintour, editor of Vogue, in the dishy documentary The September Issue. The title refers to the fattest monthly edition of the fashion bible, and the sheer creative and financial efforts it takes to stage and publish it--not unlike a full feature film pressed inside glossy printed pages.Wintour, often thought to be the inspiration for the Meryl Streep character in The Devil Wears Prada, is revealed by director R.J. Cutler (producer of The War Room) to be both more open and human than her carefully cultivated persona, but still guarded and tough to read. There's less focus on any possible megalomania on the part of Wintour--perhaps that's implied--and more on just what an endeavor it is to produce that issue of Vogue, its impact on the fashion world, and what kind of critter could work on such a narrow playing field, yet have her impact realized on such a vast scale.

The September Issue shows the battle of wills that goes on behind the scenes of every aspect of fashion publishing--and sometimes it's not pretty. The ruthless Wintour, at Vogue for two decades, has an equally strong-minded inner circle, including most notably Vogue's creative director, Grace Coddington, a former model (like Wintour herself) who clashes often, and colorfully, with her frenemy and longtime colleague Wintour. The political maneuvering can seem exhausting to the viewer, but the dishy reality is just too delicious. "Fashion is not about looking back," says Wintour. "It's about looking forward." And as with the best documentaries about fashion, including Unzipped and Lagerfeld Confidential, The September Issue leaves the viewer with a renewed appreciation for the beauty, creativity and energy behind fashion--even if one is watching, happily, in jeans and a T-shirt. --A.T. Hurley

Page 1 of 1 Start overPage 1 of 1
This shopping feature will continue to load items when the Enter key is pressed. In order to navigate out of this carousel please use your heading shortcut key to navigate to the next or previous heading.
Back
Next
Pages with related products. See and discover other items: Issue Colors