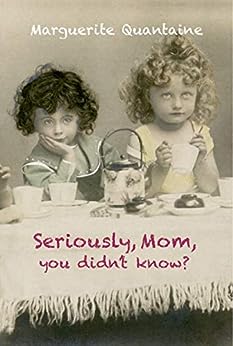 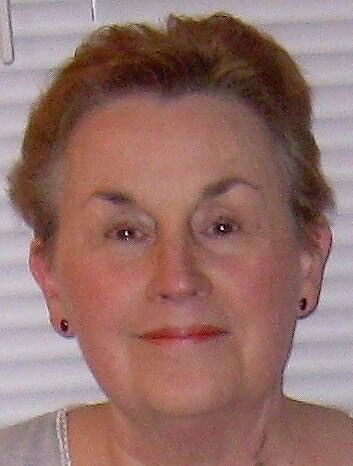 Marguerite Quantaine has been a writer-designer-essayist for 50+ years. As the Historical Research Editor of Consumers Power Magazine she was first published in 1964, spent 10 years as a corporate executive in NYC's advertising and garment industries, and another 40 years as a columnist-editor of New York and Florida publications. A freelance essayist for The St. Petersburg Times (2000-2009), her essays @ margueritequantaine.com are updated all of a sudden. She penned her first novel, IMOGENE'S ELOISE, at age 67 and is currently working on ELOISE'S IMOGENE, the second book in this planned trilogy. SERIOUSLY, MOM, YOU DIDN'T KNOW?, was released May 13, 2019. Active in the rescue of animals since feeding her first feral cat in 1948ish, she and her happily engaged partner of 49 years have adopted 13 dogs and 31 cats along the way.

4.5 out of 5 stars
4.5 out of 5
28 global ratings
How are ratings calculated?
To calculate the overall star rating and percentage breakdown by star, we don’t use a simple average. Instead, our system considers things like how recent a review is and if the reviewer bought the item on Amazon. It also analyzes reviews to verify trustworthiness.
Top reviews

Emma F.
4.0 out of 5 stars Tales From A Unique Woman
Reviewed in the United States on October 30, 2019
Verified Purchase
Marguerite Quantaine has a unique and positive view of the world and she shares that with us in this wonderful collection of essays. From the accident that nearly took her life to her brushes with fame (including a kiss from Bobby Kennedy) she gives you a birds eye view of her life. My only disappointment with the book was that I had been following Marguerite on social media for years and there was nothing in the book that I hadn't read previously as a blog entry. While it is wonderful to have all these stories consolidated in one place I was let down a bit that there was nothing that seemed new to me. All in all a good book from an author with a way with words and a unique style.
Read more
One person found this helpful
Helpful
Report abuse

MC
5.0 out of 5 stars Deep, witty author offers fresh take in follow up to Imogen's Eloise
Reviewed in the United States on May 31, 2019
Verified Purchase
I've been waiting for (stalking!) this book since I blazed through Quantaine's debut blockbuster Imogen's Eloise - an epic, decade spanning love story set in a pre-Stonewall New York - which I raced to review for my then column in She Magazine.

Seriously, Mom, You Didn't Know is just as delightful and transformative as its predecessor: Quantaine's columns are fresh, her outlook on life is neverendingly grateful and heartfelt, even in the face of real life difficulty. Quantaine takes us through childhood experiences with imaginary friends, a soul mate connection with her partner, meeting famous artists, and even a Publisher's Clearing House win (!) with grace, humor, and an eagle's eye for details. Fantastic.
Read more
One person found this helpful
Helpful
Report abuse

Deborah L. Simmons
5.0 out of 5 stars as great as I thought it would be
Reviewed in the United States on June 21, 2019
Verified Purchase
Marguerite Quantaine writes from her heart and maybe her soul. This book made me laugh so hard I cried...and then I would just cry. I grieved for lives lost...and cheered for lives well lived. In other words I felt all the feels.
Though we do not agree on all things..we do agree on most....animals absolutely!...our rescue dogs and cats probably talk to each other in the afterlife and giggle about how well they had us trained.
This book came at just the right time for me..it got me through a hard time..I think everyone..no matter who you are..should read this book. You will NOT be sorry.
Read more
One person found this helpful
Helpful
Report abuse

ALR
5.0 out of 5 stars Worth Reading Twice
Reviewed in the United States on May 23, 2019
Verified Purchase
I’m no literary expert but I know what I like and I like this author’s writing style ...the choices of her words ...the way she construct her sentences .... I get a visual and an emotional attachment to what’s being said. And that’s what hooks me into reading more and more or in this case re-reading the same book over again. I loved the kindle version so much that I brought the paperback for my personal library.
Read more
2 people found this helpful
Helpful
Report abuse

LilDickens
5.0 out of 5 stars Thank God that drunken taxi driver didn't kill you!
Reviewed in the United States on August 22, 2019
Verified Purchase
Thank God that drunken taxi driver didn't kill you! I wouldn't have been able to enjoy reading about a life well lived!
Your writing is poignant, philosophical, life affirming, and most importantly loving! Your writing about true love is universal.
I especially enjoyed your writing about our hometown. Your stories about our elementary school brought back wonderful memories for me. On one hand your stories about high school made me sad & angry, while on the other hand in your reflections you give me the feeling of forgiveness. This is the most charming thing about your character Ms M!
Please keep on writing. We all can learn important life lessons from you!
Read more
One person found this helpful
Helpful
Report abuse

Susan
5.0 out of 5 stars A Masterpiece For The Times
Reviewed in the United States on December 18, 2019
Verified Purchase
Marvelous, real, insightful, warm and truly a masterpiece for the times. An inspiration as well as a comfort to those conflicted. Quantaine's unique style of writing has clarity and flair! Though obviously written by a warm, insightful, intelligent and giving woman who is gay, this book is ultimately gender fluid! I found the chapters to be entirely relatable as a human being aspiring to see the world through the eyes of goodness and right.
Read more
Helpful
Report abuse

kycoffin
5.0 out of 5 stars Please, don’t end!
Reviewed in the United States on March 18, 2020
Verified Purchase
I loved this book! Delightfully written and spot on with history. As an avid reader, with more than 50 years spent with my nose in a book, this book clearly tops the list as a master of the written word. How I hated to reach the last page!
Read more
Helpful
Report abuse

Gail M. Trabucco
5.0 out of 5 stars Would give this book a 10 if I could.
Reviewed in the United States on July 23, 2019
Verified Purchase
Love this book. Marguerite Quantaine takes you on a journey of her life, and what a life it has been.
I found myself relating to so many of her stories throughout the book. Ms Quantaine is intelligent,fearless wise and loyal to what and who she loves in life. Women loving women, my community. I wish I had had this book when I was coming out in the 70’s. I highly recommend this book and look forward to reading her first book Imogene’s Eloise next.
Read more
Helpful
Report abuse
See all reviews

Ann Breck
5.0 out of 5 stars You'll want bookmarks for revisiting!
Reviewed in Canada on August 22, 2019
Verified Purchase
The title of this book led me astray. Being a follower of Marguerite’s I had known it was a collection of essays celebrating the life and loves of the author. But on actually receiving it, I began reading with the expectation of a story. My bad.

I continued reading from that erroneous perspective and found myself disquieted at the end.

Knowing the depth and breadth of the author’s life experiences and wisdom, I decided to read it again to enjoy it as it should be enjoyed.

Parts of the book will appeal when you’re looking for details of the author’s life, and many will bring back memories of your own life. I came away with a sense of wonder at how many ways we humans are alike and share the same experiences and emotions. The references to newsworthy people and events in the past were very enjoyable.

Overall it is a testament of Marguerite’s values, and the beauty of her and Liz’ life-long love for each other. That shines through beginning to end.

There are all kinds of reflection, observations, and advice. One of my favorite chapters in that vein is “The Quality Of Joyful Longevity” with my favourite quote: “whatever isn’t learned is doomed to be repeated with someone else.” That’s followed up with “49 things we’ve learned in 49 years of being in love.” (a real list of the 49 things!).

This is a book I will keep going back to, not necessarily to reread in totality but to revisit the parts related to my current moods and needs. You can’t go wrong buying and savoring it.
Read more
Report abuse

Helen Darzanos-Griffiths
5.0 out of 5 stars A brilliant book of heartwarming and confronting essays.
Reviewed in Australia on August 1, 2019
Verified Purchase
Whilst this book is not my typical genre reading, I must say I loved every chapter, the tales the author tells are illuminating and informative on a way of life I know not much about, but am grateful now for a deeper understanding.
Marguerite Quantaine writes beautifully and her one liners gave me a punch. An important book with no borders.
Read more
Report abuse
See all reviews

Tags that will help you discover similar books. 4 tags
self-helpbiographies & memoirsrelationshipsparenting & relationships
Results for:
Page 1 of 1Start overPage 1 of 1
Previous page
Next page
Where do clickable book tags come from?
Book tags are created from a variety of sources, some of which are customer-generated. Amazon is not legally responsible for the accuracy of the tags represented. If you are an author or publisher and would like to remove a tag associated with your title, please contact your vendor manager or publisher support team.