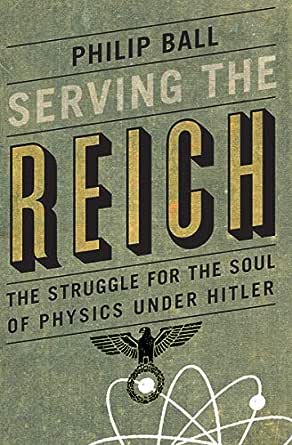 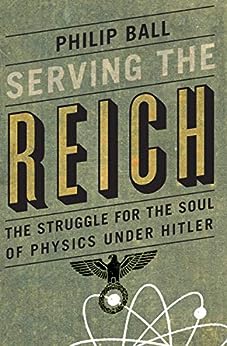 Serving the Reich: The Struggle for the Soul of Physics under Hitler Kindle Edition

“A fair-minded and meticulous assessment of the generally weak-kneed response, and especially of the actions of three non-Jewish physicists in Germany, all Nobel laureates.”
(Jewish Daily Forward)

“The biggest problem with the behavior of Heisenberg, Planck, and Debye is not, Ball suggests, that they failed to actively resist the Nazis. After all, he writes, ‘it is a brave person who asserts without hesitation that he or she would have done better.’ Instead, it is their failure even to engage with the idea that they, as scientists, bore some responsibility for the work they did and the regime under which they did it. Being an ‘apolitical scientist’ is itself a political decision, Ball argues, and as his book demonstrates, it is not always the right one.”
(Physics Today)

“I have been studying this subject for decades, but I found new things in Ball’s book. He has put the material together in an accessible way, and there is an extensive bibliography for people who would like to dig deeper.”
(Wall Street Journal)

“Serving the Reich is a remarkable achievement—not only for its popularization of historical debates but also for the depth of its analysis. Both the layperson interested in the moral dilemma of physicists under Hitler and the historian familiar with the controversial debates will find Ball’s account highly instructive.”
(Physics Today)

“This is an outstanding work about the social responsibility of scientists, exemplified by considering the actions of three Nobelist physicists during the Nazi regime in Germany: Max Planck, Peter Debye, and Werner Heisenberg.  . . . Ball, a journalist and prolific author chronicles the pressures on these men to expel Jews from their posts before the war and to pursue war research and support the Nazi ideology during the war.  The retrospective furor about their alleged collaboration, accommodation, or resistance motivates Ball to reconstruct their dilemmas and responses.  The conflicting accounts of Heisenberg’s role in the atomic bomb project are carefully reviewed and their ambiguity noted and discussed.  In these episodes, Ball thoughtfully navigates the nuances of attaching motives to acts, avoiding justifying the more strident contemporary accusations and exoneration.  This is a stunning cautionary tale, well researched and told. Essential.”
(Choice)

“An excellent, concise account of the German side of the most dramatic era in the history of physics.”
(Michigan War Studies Review) --This text refers to an alternate kindle_edition edition.

Philip Ball is a freelance writer who lives in London. He worked for over twenty years as an editor for Nature, writes regularly in the scientific and popular media, and has written many books on the interactions of the sciences, the arts, and the wider culture, including, most recently, Curiosity: How Science Became Interested in Everything, also published by the University of Chicago Press.
--This text refers to an alternate kindle_edition edition.

4.1 out of 5 stars
4.1 out of 5
27 customer ratings
How does Amazon calculate star ratings?
Amazon calculates a product’s star ratings based on a machine learned model instead of a raw data average. The model takes into account factors including the age of a rating, whether the ratings are from verified purchasers, and factors that establish reviewer trustworthiness.
Top Reviews

Delta D.
2.0 out of 5 stars I gave up after chapter 6 out of 12. The narrative seems to lack objectivity.
Reviewed in the United States on December 10, 2017
Verified Purchase
Alas, (for me, at least) the narrative seems to lack objectivity. I gave up after chapter 6 (out of 12). The (rather judgmental) narrative seems driven by the author's preconceptions.All the central characters are now dead, so the source material requires selection and interpretation. I get the impression that great physicists (e.g. Heisenberg) are predetermined to be presented as admirable citizens and justification is found for apparent compliance with (or refusal to protest against) the Third Reich. Lesser physicists (Stark and Lenard) have their scientific achievements belittled in the book and their compliance with the Third Reich presented as abhorrent. Motives need to be inferred from the protagonists' recorded actions and the inference is is systematically *glass half-full* for the greats and *glass half-empty* for the lesser ones. The author has taken on a massive task: the literature just on Heisenberg's relationship with the Third Reich is huge and the subject of great contention. Perhaps he should have realised that any attempt to condense this into a broader view would require both sides of the argument to be presented.
Read more
5 people found this helpful
Helpful
Comment Report abuse

Luca turin
5.0 out of 5 stars Brilliant book by one of the best science journalists writing today
Reviewed in the United States on December 28, 2013
Verified Purchase
Using the life of the great Peter Debye as a narrative thread, Philip Ball examines the complex web of coercion, apathy, self-deception and misguided sense of honor that kept so many great German scientists from resisting the Nazis during WWII. The scholarship is impeccable, the portraits vivid, the writing gripping. But best of all, Ball resists all the facile judgments that so often truncate the debate about "men in hard times" to show that the failure of scientists lay mostly in their avoidance of politics at a time when only politics really mattered. They wanted to continue to play with their toys, and their toys were lethal. This profound, tightly argued, humane but uncompromising book should be required reading for all scientists and science students who think that scientific ethics is merely a matter of citing the competition.
Read more
12 people found this helpful
Helpful
Comment Report abuse

Amazon Customer
4.0 out of 5 stars Physicists under the Nazis
Reviewed in the United States on April 21, 2015
Verified Purchase
This book is not the first to discuss the role of scientists in the 3rd Reich. But it is the newest, and by focusing on three physicists, all Nobel laureates, it illuminates much of the debate on their role. The three are the much beloved Max Planck, Werner Heisenberg (leader of the Nazi nuclear bomb project), and the ambiguous and controversial Pieter Debye. One irritation: Mr Ball eschews the usual numbered end-notes which refer to the citations in the literature. Instead he has a phrase from the main text and a citation related to that. But this makes it difficult to use the end notes.As you read the text you have no idea if there is a reference at the end.

Nevertheless the book is well worth reading. You get a feeling for the German psyche and to what extent physicists were complicit or not on the Nazi horror.
Read more
3 people found this helpful
Helpful
Comment Report abuse

George Adamopoulos
5.0 out of 5 stars Amazing
Reviewed in the United States on July 26, 2016
Verified Purchase
Science is not apolitical no matter how hard certain prominent people tried to disassociate from what was going on around them at the time. The book explains the stance of German scientists, the ones that supported the Nazi regime, the ones that opposed it and the ones that tried to get by.
Read more
One person found this helpful
Helpful
Comment Report abuse

Alan K. Lefor
5.0 out of 5 stars Excellent book
Reviewed in the United States on February 27, 2015
Verified Purchase
I am very much "into" history and Physics...so take my perspective into account. I am not a historian. I think this book was excellent, although a little "dry" at times. It shows a side of these guys that one might not otherwise think about.
Read more
One person found this helpful
Helpful
Comment Report abuse

John E. Banks
5.0 out of 5 stars Five Stars
Reviewed in the United States on March 14, 2015
Verified Purchase
I really enjoyed reading this book and learning about the German side of the a-bomb race.
Read more
One person found this helpful
Helpful
Comment Report abuse
See all reviews from the United States

autodidact
5.0 out of 5 stars The Physicists Who Worked for Hitler
Reviewed in the United Kingdom on October 17, 2016
Verified Purchase
Philip Ball does an excellent job of showing how the leading physicists who didn't flee Nazi Germany accommodated themselves to the regime. It seems fairly clear that despite justifications afterwards, the likes of Heisenberg got on with their jobs and looked after their own interests. There is no evidence that research into the development of an atomic bomb was deliberately slowed down or sabotaged (and some indication that Heisenberg got his sums wrong).
Of course, this is not a phenomenon unique to Germany. The physicists were members of a middle class that shared the prejudices of their time, including a general anti-semitism and were firm believers in law and order and obedience to authority. Given that we are now in danger of entering another period where demagogues exploit prejudice and fear for their own ends, the lessons of this book are timely. .
Read more
Helpful
Sending feedback...
Thank you for your feedback.
Sorry, we failed to record your vote. Please try again
Report abuse

chris & kath smith
4.0 out of 5 stars Good but could benefit from some editting
Reviewed in the United Kingdom on November 30, 2014
Verified Purchase
I found it slow to start but once in to it enjoyed it reminding myself of A level physics. The final few chapters were quite tedious and somewhat repetitive.
Read more
Helpful
Sending feedback...
Thank you for your feedback.
Sorry, we failed to record your vote. Please try again
Report abuse
Load more international reviews

Alistair Chapman
5.0 out of 5 stars All good, no problems with delivery
Reviewed in the United Kingdom on May 3, 2015
Verified Purchase
Arrived as described
Read more
Helpful
Sending feedback...
Thank you for your feedback.
Sorry, we failed to record your vote. Please try again
Report abuse