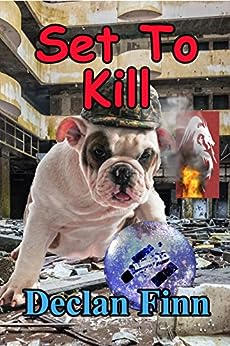 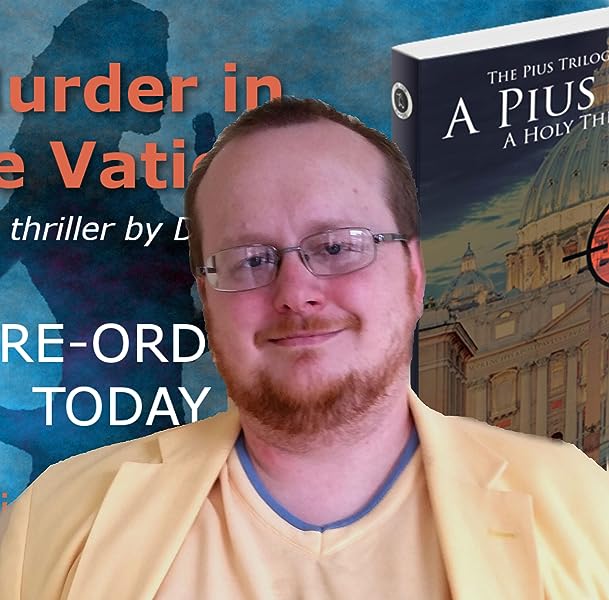 Declan Finn is the author of Honor At Stake, The Pius Trilogy, and writes video game reviews, and works for six blogs. He is one of a legion of writers over at The Catholic Geeks blog (a legion, for we are many). Other books he has written includes the comedy-thriller It Was Only on Stun! where he blows up a sci-fi convention. He co-authored the science fiction espionage novel Codename: Winterborn, and it's sequel Codename: UnSub He has been nominated in several categories in the Sad Puppy 4 lists, including Best Related, Fan Writer, and best novel. --This text refers to the paperback edition.

4.9 out of 5 stars
4.9 out of 5
14 global ratings
How are ratings calculated?
To calculate the overall star rating and percentage breakdown by star, we don’t use a simple average. Instead, our system considers things like how recent a review is and if the reviewer bought the item on Amazon. It also analyzes reviews to verify trustworthiness.
Top reviews

Karl Gallagher
5.0 out of 5 stars Violence. Cosplay. Comedy.
Reviewed in the United States on December 19, 2016
Verified Purchase
Our Hero has to provide security for a thinly-fictionalized major SF con. The authors are feuding. Some of the cosplayers are assassins in disguise. The security grunts are all in Stormtrooper armor. And some folks have a grudge against Our Hero from his previous adventures. This leads to brawling, sniping, explosions, and lots more over-the-top violence in a hysterically funny story.

If you know what the terms "Puppies" and "Hugos" mean in combination you already know where you stand on that part of the story. If you don't, come for the slapstick. If you can use that term for funny high-powered violence.
Read more
One person found this helpful
Helpful
Report abuse

Brian Lee Gnad (The Bubba Man)
5.0 out of 5 stars Sean meets the Puppies!
Reviewed in the United States on November 26, 2016
Verified Purchase
If you followed the puppy gate stuff you get this. If you've been to DragonCon you'll get it more. The style is typically Declan's. I'm a Sean A. P. Ryan fan myself so I enjoyed the hell out of that. If you have no idea what I'm talking about, it may take you a bit more work to catch up. However it is still good satire and worth the effort. YMMV.
Read more
2 people found this helpful
Helpful
Report abuse

Kindle Customer
5.0 out of 5 stars Great read!
Reviewed in the United States on December 5, 2016
Verified Purchase
Loved this book. A good who done it mystery, enough in jokes for the geek crowd, of which I am a part, and some fantastic weapons. Put them all together at a sci-fi convention and you have some really good hours of reading. Truly enjoyed both in the series and am waiting for the next one!
Read more
Helpful
Report abuse

B. J.
5.0 out of 5 stars An excellent and hilarious murder mystery.
Reviewed in the United States on December 14, 2016
Verified Purchase
Set to Kill was hilarious and more true to life than most people would realize. If you followed the Sad Puppies events then you know what I'm talking about.

I haven't read the A Pius Man trilogy, I'll have to check that out next.
Read more
One person found this helpful
Helpful
Report abuse

Replace the middle-aged Inspector with a security expert who happens to be a martial arts guru/all-around killing machine still dealing with the aftermath of saving the world as we know it.

Replace upper-class Brits with a collection of endearingly and/or annoyingly (depending on your perspective) odd characters inspired by real-life players in the sci-fi publishing world.

Stick it into the naturally insane environment that is the world's largest Sci-Fi/Fantasy con (fictionally renamed WyvernCon).

Oh and also make it funny enough to qualify as satire.

OK, so maybe it's nothing like an Agatha Christie mystery after all. But it is a darn good read. The reason I was thinking of Christie is because, underneath all the fun and goofiness and inside-baseball sci-fi literary community references, there is a solid plot worthy of an old-fashioned detective novel. As with any good mystery, the final reveals were surprising yet backed up by clues sprinkled throughout the story.

The pacing is good, and while some sidetracks and background sections slow down the main story, they're still amusing enough to keep the reader entertained. The violence is not as plentiful as Declan Finn's fans might expect, but there's still sufficient to keep the adrenaline flowing. The fully fictional characters are well enough developed that you can go into the story cold and still care about what happens to them; and those inspired by real life are easily recognizable while changed up just enough to still fit into a satirical fiction environment.

I can't find anything particularly "wrong" with this book to explain why exactly I'm only giving it 4 stars. Perhaps Mr. Finn set my expectations for his work too high and I've become stingier with my stars. That having been said, it's still very much recommended, if only as a palate cleanser in between his more traditional novels because it's just so very different. Enjoy and Happy Reading!
Read more
2 people found this helpful
Helpful
Report abuse

GoMan
5.0 out of 5 stars "Reality Couldn't Have Done This to Him"
Reviewed in the United States on January 10, 2017
"The Stormtroopers looked at the staff, then each other, nodded, and sent out a BOLO order for Donatello."

So you want to know about Set To Kill by Declan Finn? Well that's a bit of a tale. If you've read the author's first published novel It Was Only On Stun! then you're halfway to understanding it. Me, I've read the book in question, and I'm not sure I fully comprehended the madness in these pages. What you're in for is a story filled with action, mystery, and more than a bit of comedy. That quote above is not even the most insane thing in the book.

After the events at the Vatican (long story), Sean A.P. Ryan is back in the protection game. Not only that, but he's working another con! Unfortunately, he soon finds himself in over his head as mercenaries, bounty hunters, crazed fans, stalkers, and just plain nutty people, assail him from every angle. Again! No wonder he doesn't like working at these things.

But it soon gets weird.

If there is one thing Mr. Finn excels at (there are a few) then it would have to be the action scenes. I'm hard-pressed to think of an author with so many details in their action scenes. Everything flows, the events are described clearly and fit together, and they are usually quite surprising. And funny.

Despite the action and the comedy there are several pretty good mysteries going on. Someone is killing guests at WyvernCon and it is up to the ever-overwhelmed Sean A.P. Ryan to put a stop to it. Oh yeah, and he has to make sure he stays alive with a several million dollar bounty (and growing!) on his head. That's kind of difficult with explosions, rifle shots, and assassins slipping in from every crevice, while he's trying to do his job. I'm starting to think he doesn't get paid enough for this.

Now if there is any complaint to note it is that there is a bit of inside baseball to some of the background elements of the story. Mr. Finn changes the names, but the events are very much based on a real "fandom" event. And it is just about as silly as he describes it as. I'm not going to explain it here because either you already know what it is or you don't care. Nothing I can say will add to it, so I'll just say that you might feel a little lost getting your head around the central conflict. Mr. Finn does his best to explain it at length, but it is what it is. Nonetheless, he does parody the events, and the players involved, quite well.

This is a hard book to really nail down. Would it be correct to call it something like if Dashiell Hammett wrote an episode Murder, She Wrote thinking it was a sequel to Commando? I'm just not sure. If you enjoyed the previous book in this series, It Was Only On Stun!, then you should enjoy this one more. Whatever it is, Set To Kill accomplishes exactly what it sets out to do.

Should you read this book? Only if you like wanton destruction and humor popping up in strange places. And, really, why wouldn't you like those things?

I can't wait to read the sequel. Surely by then Sean Ryan will have enough of a handle on the con experience to run his own. I could just imagine.
Read more
One person found this helpful
Helpful
Report abuse
See all reviews

Scott Osmond
4.0 out of 5 stars A Bit Of A Laugh
Reviewed in Australia on August 2, 2017
Verified Purchase
This satirises a brawl within the SF&F community. As such it contains many inside jokes, I recognised all the characters. The insides however shouldn't spoil the story. Massive amounts of action, a mystery, who done it all wrapped up in a convention complete with cos-play. The lead Sean comes across as a comic book action character.
Read more
Report abuse
See all reviews