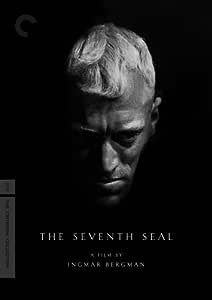 $29.99
& FREE Shipping on eligible orders. Details
Sold by: Amazon.com
Have one to sell?
Sell on Amazon

The Seventh Seal (The Criterion Collection)

Few films have had as large a cultural impact as Ingmar Bergman's The Seventh Seal (Det sjunde inseglet). Disillusioned and exhausted after a decade of battling in the Crusades; a knight (Max von Sydow) encounters Death on a desolate beach and challenges him to a fateful game of chess. Much studied; imitated; even parodied; but never outdone; Bergman's stunning allegory of man's search for meaning was one of the benchmark foreign imports of America's 1950s art house heyday; pushing cinema's boundaries and ushering in a new era of moviegoing.

4.9 out of 5 stars
4.9 out of 5
307 global ratings
How are ratings calculated?
To calculate the overall star rating and percentage breakdown by star, we don’t use a simple average. Instead, our system considers things like how recent a review is and if the reviewer bought the item on Amazon. It also analyzes reviews to verify trustworthiness.
Top reviews

Suzathustra Katzen
5.0 out of 5 stars Bergman. Enough Said.
Reviewed in the United States on February 4, 2017
Verified Purchase
What can be said about this film that has not already been said, or written? It is sacred in the temple of cinema. The knight's confession to Death alone is inexhaustible. I used it to open a philosophy essay on Schelling, Kierkegaard, and Nietzsche. And I got an A. But enough about my writing skills. Bergman is a genius. He is an artist. He is a philosopher. His angst over the silence of God is an extension of continental/German philosophy which began with Martin Luther, if you ask me. But this is the sort of film that philosophers and people who are interested in the deepest human ponderings will not only want to see, but own, so they can watch it over and over again. It is the kind of film that should be cultivated over a lifetime. Every time I watch this film, I come away with something new, even if it is only that Bengt Ekerot bears a striking resemblance to Dwight Eisenhower, who was President of the United States at the time this film was made (1957), and I got that from the excellent essay included in the DVD, written by Gary Giddens. There are some people who won't get this this film. But to those of us who do, it's a treasure.
Read more
29 people found this helpful
Helpful
Report abuse

P. Savage
5.0 out of 5 stars Wow, I see why Bergman, Fellini and Kurosawa are the best
Reviewed in the United States on March 31, 2019
Verified Purchase
I have waited to see this film since I wanted the ability to just sit and enjoy it. Holy cow! I now see, in several hundred movies I have sat through, at least one element from this film. So much today is so derivative.
I believe the theme was important, the "holy family" as witness to the cruelty and self-inflicted injury we do to our selves and our society. The cinematography is stark but compelling, the characterization is just right and leaves you just enough information to understand the characters and their motivations. The black and white restoration is well done and the musical score is clearly heard and undistorted. Criterion did a good job with this product. Enjoy.

Bryan A. Pfleeger
5.0 out of 5 stars Incredible Presentation of a Classic
Reviewed in the United States on October 25, 2013
Verified Purchase
Criterion has outdone themselves once again with this new edition Blu Ray of Bergman's classic film. The Seventh Seal is an absolute must see for any would be student of the cinema and this is the package to see it on.

Max von Sydow plays the iconic knight Antonius Block who has just returned from the Crusades with this loyal squire Jons(Gunnar Björnstrand). Both men are world weary and return to a Sweden being devastated by the plague. In one of the screen's great images Block challenges Death(Bengt Ekerot) to a game of chess. The stakes are high if Block wins he gets to live or at least live long enough to do one noble deed in his life. That deed is the saving of a small family and their child from the death at the hands of the plague.

This is one of the great intellectual films of contemporary cinema but that thought should not put off any potential viewer. The film explores the meaning of life and death and the theory of whether or not God exists in this world.

The Criterion package presents the film in its original Swedish and also in an English dubbed track. The transfer is as perfect as if the film was brand new. But the film itself only hints at the things to come as one explores the disc. First up is an introduction to the film by Bergman hmself. That is followed by an excellent commentary track by Peter Cowie produced for the original Criterion release. To this commentary Cowie has added a brief video afterward of material that he was not able to discuss on the original track.

The biggest special feature is the presentation of Bergman Island (2004) Marie Nyrerod's documentary on the director originally made for Swedish television and then recut as a feature film. This is an impressive extra feature since Criterion has also released the film as one of its stand alone titles. The film runs 85 minutes and covers three aspects of the director's life: his cinema, his life in the theatre and finally his reclusive later years on Faro Island. This feature alone is worth the price charged for the disc.

Wrapping up the disc are a 20 minute interview by Cowie with Von Sydow which was used for research into Cowie's book on the actor. The interview which is audio only speaks to the issue that foreign actors have of breaking into the American film system. There is also a tribute to Bergman by Woody Allen for Turner Classic Movies and the excellent short Bergman 101 also by Peter Cowie which walks the viewer through a large segment of the director's career in about 35 minutes. The original trailer for The Seventh Seal is also included.

This is a must own disc that comes with the highest recommendation.

J. Trimble
5.0 out of 5 stars This Is How You View This Film - The Criterion Way!
Reviewed in the United States on July 13, 2017
Verified Purchase
Perfect print. Perfect sound. Tons of extras. Criterion has done it again with this release. I would not dare to review the film itself, as there are so many perfect reviews of this masterpiece, I could not do it justice. Just know that if you want the best look at this incredible movie, Criterion has produced the best print ever.
Read more
6 people found this helpful
Helpful
Report abuse

Amazon Customer
5.0 out of 5 stars A great reproduction of a classic
Reviewed in the United States on July 29, 2017
Verified Purchase
Having seen parodies of this movie for decades, I finally decided to watch the real thing! Glad I did.

The video and sound quality of the disc is very good. No issues there. The packaging is great. I recommend the version sold as The Criterion Collection.
Read more
6 people found this helpful
Helpful
Report abuse
See all reviews

Robert Glover
5.0 out of 5 stars Brilliant restored Bergman classic
Reviewed in Canada on November 5, 2020
Verified Purchase
A Swedish knight returns home from the crusades. There is plague and death everywhere. In a very famous scene the knight plays chess with a personified Death prior to facing his own death. This restored version of Ingmar Bergman’s 1957 B&W film is visually stunning, and the emotional strength of the story holds in our own time of conflict, plague and death.
Read more
Report abuse

Gary Fuhrman
5.0 out of 5 stars Superb new edition
Reviewed in Canada on November 5, 2009
Verified Purchase
This is of course one of the all-time great films, and the new Criterion release gives you an impeccable transfer of it, light and shadow stunningly sharp and clear. The feature-length interview documentary on disc 2 reveals much of the intimate connection between Bergman's life and his art, in his own words (it includes reflections on several films, not just The Seventh Seal). If you're only going to buy one Bergman on DVD, this should be it.
Read more
7 people found this helpful
Report abuse

Hammy
5.0 out of 5 stars Classic Cinema
Reviewed in Canada on May 18, 2018
Verified Purchase
Incredible existential cinema.