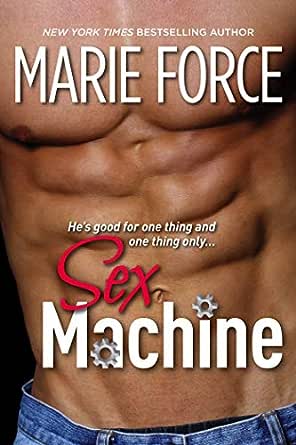 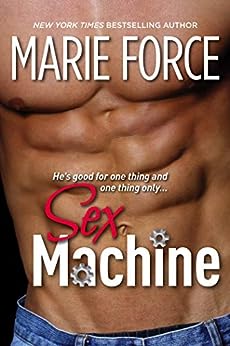 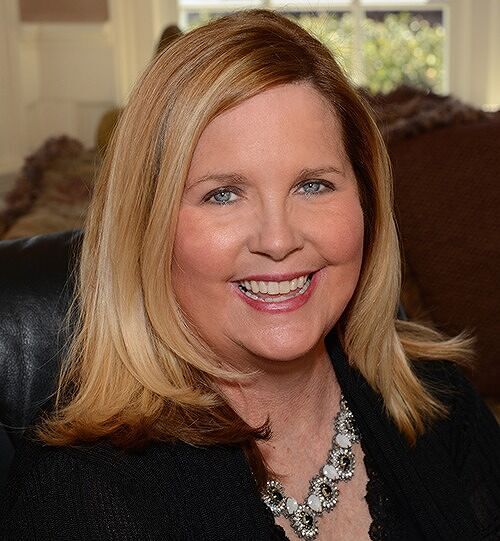 "My heart broke at some scenes and rejoiced at others. This is a spicy and steamy read and those parts are Smokin' HOT and tenderly depicted." --5 out of 5 hearts review by I Love My Authors book blog

"...the book had me reading non stop and it will most definitely leave you wanting for more." --5 star review from Jackie's Book World

"If you've not read any of her booksand don't want to start a series right at this time, read this book. You willlove it too, I guarantee it." --A grade from The Good, The Bad and TheUnread

"...never and I mean, NEVER, have I enjoyed a Marie Force story more than Sex Machine. It is by far her BEST BOOK YET. From the opening line, Marie lays down the gauntlet and lets the reader know this book is going to burn in the best way." --5 star review from Crystal Bookalicious BabesBlog's Reviews

"Well, I think it's safe to say that Honey Carmichaelsurprised both Blake and me with the first words that came out of her mouth inthis book, but it wasn't a bad thing, not at all."-- 5 star reviewfrom A Hopeless Romantic's Booklandia 's Reviews  --This text refers to the paperback edition.

Bedford Holly is an in-demand narrator with a background in film and stage acting.

Amber Sparrow is an in-demand narrator with a background in film and stage acting. --This text refers to the audioCD edition.

4.6 out of 5 stars
4.6 out of 5
515 global ratings
How are ratings calculated?
To calculate the overall star rating and percentage breakdown by star, we don’t use a simple average. Instead, our system considers things like how recent a review is and if the reviewer bought the item on Amazon. It also analyzes reviews to verify trustworthiness.
Top reviews

BookWorm
5.0 out of 5 stars Blake discovers he sure loves Honeydew!
Reviewed in the United States on November 17, 2018
Verified Purchase
Thoroughly enjoyed this story! Blake and Honey grew up together. Having known each other since they were small children they have a lot of memories and history from their past. Sadly, some of those memories are heartbreaking! 12 years have passed since a horrific event changed Blake's life, but he can't move beyond it. What right does he have to feel any joy or happiness? Jordan's life ended in an instant, and now Blake's days are just a series of wake-up and exist, ever since he finally recovered physically from the accident that took Jordan from him.
Honey is tired of hearing how great sex can be, she wants to experience it for herself. What better way to find out than to ask for a night between the sheets with the guy that has a reputation for rocking a girls world in the bedroom? So, that's exactly what Honey does!
Blake says the space in his chest where his heart used to be isn't capable of more than a 'one and done' with the women he takes to bed, and he makes sure they understand that before he ever touches them. One night, nothing more!
So, why then does he crave the real connection he feels for Honey after her outrageous proposition and their night of amaxing sex together (several times before morning)?

If you enjoy your romance stories with LOTS of steamy times described in delicious detail, a broken hearted H who is completely off-the-charts sexy and sweet as can be, a beautiful kind-hearted and equally sexy h, then you will love this book as much as I did.
Two thumbs up for Sex Machine!
Read more
One person found this helpful
Helpful
Report abuse

Kaatiya13
3.0 out of 5 stars Lots of S.E.X. for sure!
Reviewed in the United States on September 28, 2016
Verified Purchase
Whew okay! So this was a bit different style of book of Ms. Force. I am not used to reading a romance from here that packed so much "oomph" (for lack of a better word). The first thing I would tell someone who is potentially going to buy/read this book is that this book is about sex and that is what is taking place for 75% of the story. Now don't take that as a negative necessarily because as far as sex scenes go, these were SMOKING HOT! The thing is there was A LOT of them! I really did enjoy the story between Honey and Blake and actually wish that there was a bit more story with this two and maybe a tiny bit less sex because I did like the characters so much that I wanted to see more of them together but out of the bedroom. Having said that I did enjoy the story and the struggles that these two faced. I loved watching Blake come around and succumb to his feelings for Honey. He was such a sexy but sweet hero and I fell in love with him right away. If you are looking for a quick, fun, sexy (emphasis on sexy) romance than this would certainly leave you smiling.
Read more
43 people found this helpful
Helpful
Report abuse

Carole Lake
2.0 out of 5 stars Marie Force is a great writer; this one was not my favorite
Reviewed in the United States on October 1, 2016
Verified Purchase
I have loved and bought every book I could find from Marie Force. I'm not sure why this one didn't call my name. I think it is because the main character is "The Cock". For me, it marginalized Blake to have that be his defining asset. As always, beautifully written, but I think the plot development was just too easy. HOT sex, though - whew!
Read more
14 people found this helpful
Helpful
Report abuse

Goth Gone Grey
TOP 500 REVIEWERVINE VOICE
4.0 out of 5 stars Friends to lovers pornmance
Reviewed in the United States on November 17, 2018
Verified Purchase
You know how it is - there's this guy you've been friends with since you were little, and now you're both fully grown. He's fully grown enough that a certain body part requires its own zip code and has a nickname and reputation of its own. (Pretty sure Amazon won't let the actual nickname fly, so I'll be calling it The Rooster going forward).

She's heard legend of The Rooster, and the man attached to it, and decides what she's been lacking in her life is one night of amazing sex. So she propositions him, boldly, and he accepts, in the first few pages. This is the equivalent of an action film starting with an explosion - we read these in large part (ahem) for the sex scenes, and this book is full of them.

Despite their long time friendship, both leads have trauma in their past that makes relationships difficult. When the inevitable happens and she falls in love with being well and thoroughly pleasured by The Rooster and the man attached to it, the drama (and so much more seXXXy time) ramps up.

Overall well written and engaging, but the continued objectification of the male lead and his skills wore thin. An edited for Amazon example of the writing:

"While my brain asks why, my girl parts shout yes, yes, YES! We are needed! Get your a$$ in that shower! As I pull off my clothes, I suspect I’m going to regret this. In fact, I know I’m going to regret it, but I do it anyway. I step naked into the shower with the hottest man I’ve ever known—and his Rooster with a capital C. His hands are all over me, touching, stroking, caressing, while his lips devour."
Read more
Helpful
Report abuse

abby9278
2.0 out of 5 stars Very disappointed don't recommend this book. The writing very immature for Marie Force I can't believe she wrote it.
Reviewed in the United States on January 5, 2017
Verified Purchase
Very disappointed. Not up to the standards of Marie Force books. This book is so one-dimensional that I find myself just wanting to
delete it from my library.I love all the series Ms Force has written. I Loved the Quantum Series and can't wait for book 6. But this book
is nothing like the Quantum books. I feel this book was just thrown together without any forethought. I do not recommend it. Ms Force
is a great author and this does not sound like a book she wrote.
abby 9278
Read more
8 people found this helpful
Helpful
Report abuse
See all reviews

Mags
5.0 out of 5 stars I loved this story
Reviewed in the United Kingdom on May 7, 2017
Verified Purchase
It was hot, sweet, fun and at times emotional. Basically everything I love in a Marie Force novel and what she really excels in writing. Sex Machine had me completely gripped from beginning to end. It was packed full of chemistry and heat from the moment Honey uttered those six words and I loved all the Honey inspired nicknames Blake used throughout this entire story. The characters themselves were also all extremely lovable not just Blake and Honey but their group of friends and I think there's definitely potential for more stories and I for one would love to read them and would happily recommend Sex Machine to others.
Read more
Report abuse

Shorty
5.0 out of 5 stars Creative writing
Reviewed in the United Kingdom on February 23, 2019
Verified Purchase
Brilliant storyline, good characters in the story. Definitely would recommend.
I was a bit discarded how easy he changed his mind after the fatality and she had to fight again, even though she had her own crosses to bear. I mean men are really complicated.
Read more
Report abuse

Lynne Tilley
5.0 out of 5 stars Absolutely Loved It.
Reviewed in the United Kingdom on May 22, 2017
Verified Purchase
Truly loving this author who really knows how to write.
No being dropped off of a cliff, no abrupt endings.
An absolute joy to read, nothing is rushed over, everything is covered beautifully.
Get ready to get those soggy panties in a twist with the hottest guy in town, warning ladies better dread alone.
Enjoy.
Read more
Report abuse

JED66
5.0 out of 5 stars Wowzer that was hot!
Reviewed in the United Kingdom on August 25, 2018
Verified Purchase
Having read all of Gansett and now all of Quantum, I wasn’t prepared for the hotness of this story. As well as being a sweet and lovely romance, it was full of hot loving. 5 stars
Read more
Report abuse

AVIS
5.0 out of 5 stars Sex Machine
Reviewed in the United Kingdom on October 16, 2016
Verified Purchase
As usual a brilliant read from Marie the writing the story the content I always feel like I'm there in every book she writes
Read more
Report abuse
See all reviews