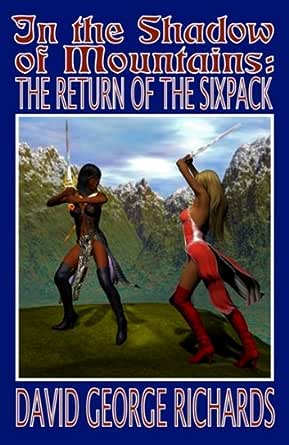 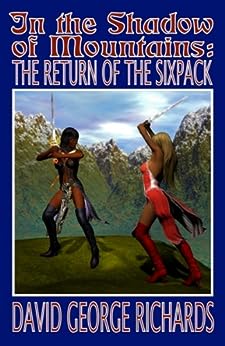 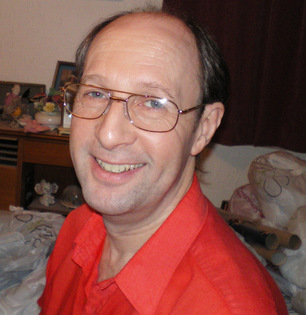 In the Shadow of Mountains: The Return of the Sixpack Kindle Edition

The Return of the Sixpack is the second part of a two part story under the overall title of In the Shadow of Mountains. The first book, The Lost Girls, introduces the main characters and places, setting up the world they now live in and the events that forge their futures. The Return of the Sixpack deals with the girls when they are all grown up and in their forties, and although it is a sequel, it can be read independently of the first book. Now the girls are fully fledged women and warrior thieves. The adventures they have had, and continue to have, are rich, violent and exciting. There are also some humorous moments and characters in the stories as counter points to the battles, witches and feuding Knights. All this is mixed in with hard science-fiction giving the background, characters and events a more firmer footing in reality. I like things in my stories to work for justifiable reasons, but I don't give everything away too easily.

In this story the girls have grown up to be badder than ever. Robbing tombs might be fun, but having an angry witch and the entire Sullenfeld Hordes trying to skin you can be a downer. Mind you, bumping into the General you once went to school with could be worse...

I was born in Manchester in the North West of England in 1957. Although I have moved around a bit, Manchester is still both my physical and spiritual home. I am a Northerner. I am also married to Rosanna, and have been now for twenty-one years. I have an imagination that began when I was very young and never waned. I also like reading and so it was no surprise I suppose when I started writing. Because I am an unknown who has never been picked up by either an Agent or mainstream Publisher, I am a bit of a one man band. I even do my own covers and have become a bit of a digital artist as a result. I started writing when I was young and very bad. Now I am older and a lot better. My writing has improved too. I write science fiction, fantasy and romance stories. I also like to mix and match with romance in science fiction and so on. Female characters feature very prominently in my stories, many of them in strong and attractive leading roles. The reason for this is that I like women, a lot. In fact I adore everything about them, so it is no surprise that I enjoy reading stories where women feature prominently and that I should also enjoy writing stories where women feature prominently. It gives my stories a female bias, but I think they are better for it. I also like every character, even the monsters and villains, to have a realistic reason for being and doing what they do. Like reality, everything blurs. There is no right or wrong, just different viewpoints that lead to conflict. But I also like my out and out villains to be really bad. If you like science fiction, thrillers and romance stories with particular emphasis on leading female characters that are exciting and adventurous, look no further. You can also visit my website at booksandstories.com.

Heroine admirer
5.0 out of 5 stars What a great bunch of gals
Reviewed in the United States on August 28, 2011
When I finished the Lost girls I could hardly wait to download this book and follow their exploits. and I was not disapointed. This book continues the serving charaters from the Lost Girls and I think it is even better. this maybe because I fould these girls, now women, to be something special. from spunky girls the members of the sixpack have turned into strong, fearless women who can even take on on equal terms the Destroyer women. The adventures surrounding them, and the other contuing and new charaters, make for a fascinating and well written story. the scene is set some 28 years after the first story but also includes brief references to the adventures of the intervening years which I hope the author will fill out in ensuing stories. All in all a very enjoyable read particularly if you enjoy strong women taking charge of their lives.
Read more
Helpful
Report abuse
See all reviews