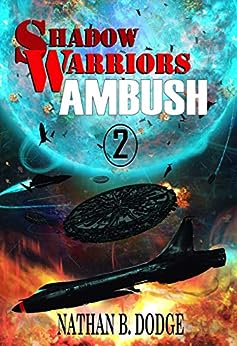 by Nathan B. Dodge (Author) Format: Kindle Edition
Book 2 of 5: Shadow Warriors
See all formats and editions
Sorry, there was a problem loading this page. Try again.

They were kidnapped and forced to fight in an alien space fleet . . .

The Shadow Warriors are a proven force in galactic battle but the tests and threats keep coming. Countless lives were lost.

Forced to train as Shadow Warriors, Cal, Letty, Tony, Sasha, and Opi hated each other at first, but became both a crew and a family, finding a way to defeat a galactic enemy. That enemy has returned, with even more dangerous fighting ships. With their commander on trial for incompetence, can they save her career and defeat the enemy once again?

The lives of millions are again at stake.

A gripping new space opera adventure series in the spirit of Ender's Game!

"Nathan Dodge expertly weds wonder and adventure to give us a heartfelt thrill-ride. Highly recommended!" David Farland, New York Times Bestselling Author
"Nathan Dodge's Shadow Warriors is a double triumph for his diverse band of fledgling space pilots, who overcome prejudices, fears, and personal demons to triumph over foes from the depths of space. A great debut!" Diann T. Read

Benjamin Moldovan
5.0 out of 5 stars Great read!
Reviewed in the United States 🇺🇸 on May 6, 2020
Verified Purchase
I enjoyed this a lot. It reminds me a bit of Ender's Game. FTL space travel "leaping" aside, the technology seems pretty reasonable. And the story and characters are quite engaging. One of those books you don't want to put down.
Read more
Helpful
Report abuse

M. Goeckner
5.0 out of 5 stars Fun book
Reviewed in the United States 🇺🇸 on December 24, 2018
Verified Purchase
Nice book to read while relaxing. I know that the author has 4 more coming. I look forward to reading them.
Read more
Helpful
Report abuse

Wolf
5.0 out of 5 stars Not just for teens. Just plane good reading.
Reviewed in the United States 🇺🇸 on January 25, 2019
Verified Purchase
I look forward to later volumes sine this one got me interested.
Read more
Helpful
Report abuse

H. Grove (errantdreams)
4.0 out of 5 stars Nifty teen wish-fulfillment save-the-galaxy tale
Reviewed in the United States 🇺🇸 on July 22, 2021
In Nathan B. Dodge’s science fiction novel Shadow Warriors, there are five teenagers leading difficult lives. Cal’s father is perennially drunk after the death of his wife and doesn’t even have enough money to feed them both. Letty’s parents are constantly yelling at each other and don’t pay any attention to her. Tony’s mother is dead and he’s living on the street. Ophelia (Opi) should be inheriting her father’s wealth, but her stepmother schemes to cut her off. Sasha lives with an abusive foster family that routinely starves him. When all five are abducted by aliens to fight in an intergalactic war, they’re forced to set aside their differences and learn to become the best of the best. An enemy called simply “The Horde” is coming toward Earth, and their pattern is well-established: they’ll bomb the hell out of the planet, kill everyone, and move in. The five teens are being taught by both older humans who were abducted in earlier years, and Molethians, a race of aliens that formed the “Shadow Warriors.” They’ve been attempting to use their fighters to harry and nudge The Horde in order to guide them away from inhabited planets like Earth, but they’re vastly outnumbered. The Horde may be uncreative and slow to change, but they definitely have the numbers.

The teens definitely had trouble co-existing at first. It was neat to watch them gradually bond and form into a cohesive team. Cal ends up being the pilot with Letty as his second. Tony is the navigator, Sasha is on weapons, and Opi turns out to be a strategic genius. Normally I’m left going “why the heck would the aliens want teenagers?” but this time it makes perfect sense. They need people who are malleable, still able to learn, adapt, and change, and able to be intimidated frankly. People who can be indoctrinated into the rah-rah military atmosphere and be passionate and enthusiastic about saving Earth. I love the detail that they deliberately research and choose teens who are in conditions that they’re not likely to want to return to (yes, this does imply they have representatives on Earth, but since they have older generations of Shadow Warriors, it makes sense that some of them could work under cover on Earth).

The training is done partially with brain implants that impart knowledge, and partly by spending day in and day out training using a simulated craft running a variety of missions. The author manages to make these test missions surprisingly interesting. It’s Opi who starts to notice certain patterns in The Horde’s simulated actions, and decides to go to the library to research everything she can on past battles. This is a teen wish-fulfillment fantasy, so naturally our group is one of the very best–perhaps THE best–serving the Molethians. When training time ends, our heroes are going to have to put all of that unusual talent and knowledge to the test.

I like the characters. They’re relatively straightforward, but not one-dimensional. I thought in one case it took them waaay too long to realize a certain thing had happened. There’s a paragraph of Letty talking to Cal about how she didn’t want to have “feminine weaknesses” and wow did that have “men writing women” energy. Which was weird, because most of the time Letty and Opi are handled pretty well.

There’s a very complex tournament to determine which teams-in-training will join the Shadow Warriors at the end of their training. The book spends pages on a superior explaining how the tournament works. Then there’s a quick summary on the order of “they needed to win four fights in a row,” to which Cal thinks that’s all he needs to know, and I couldn’t help thinking that’s also all the reader needed to know.

This book was certainly entertaining, but I don’t think I’ll read the sequel. It wasn’t amazing enough to make up for the fact that this wasn’t really my jam.
Read more
Helpful
Report abuse

Diana Smith
5.0 out of 5 stars Fantastic book!
Reviewed in the United States 🇺🇸 on May 11, 2019
This is just a fantastic book. I prayed for a book I couldn’t put down and this is it. I love the characters love the story. I hope this offer keeps writing books. I look forward to reading the next one.
Read more
One person found this helpful
Helpful
Report abuse
See all reviews
Report an issue
Does this item contain inappropriate content?
Report
Do you believe that this item violates a copyright?
Report
Does this item contain quality or formatting issues?
Report