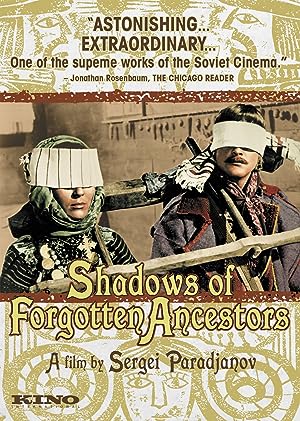 (69)
7.81 h 31 min196613+
SHADOWS OF FORGOTTEN ANCESTORS is a boldly conceived blend of mythology and pagan magic. Deep in the Carpathian Mountains of 19th century Ukraine, fate tragically decrees that two lovers will remain apart, resulting in an astonishing series of events. An international sensation upon its release. Ukranian with English subtitles.

Included with MUBI on Amazon for $10.99/month after trial

Watch with MUBI
Start your 7-day free trial
Add to
Watchlist
Redeem a gift card or promotion code
By ordering or viewing, you agree to our Terms. Sold by Amazon.com Services LLC.
Write review

Mr. Kenneth G. DaviesReviewed in the United States on June 2, 2008
5.0 out of 5 stars
Coloruful, lyrical, evocative and tragic
Verified purchase
A one-off, and a must-see. A sad story set in the 19th century Carpathians. Beautiful use of colour to illustrate emotions and, in the case of the blood-red fades, the tragic outcome. The evocation of rural life is not limited to meadows and forests, cut with beautiful still shots of tree bark and lichen: the film is full of details of everyday life, from roof replacement to bread-making and bear hunting, not to mention religious observance, funerals and a wedding, more exciting and at least as informative as any documentary. I saw this with my mother in 1966, and it reminded her of a stay with her father's family in nearby Ruthenia in the 1920s (her father had emigrated on foot to Vienna years earlier). Even the music is much closer to Rumanian folk music than Russian, so I don't understand how the authors of the cover note could have mistaken this for Russia, except for the similarity between the Russian and Ukrainian languages.
8 people found this helpful

Rachel NewmanReviewed in the United States on March 3, 2021
3.0 out of 5 stars
Amazing images and music
Verified purchase
I was glad to find a copy of this rather obscure movie which is full of amazing images and music. A good copy except the sound was a little "gurgley" in some spots therefore the 3 stars as the music is important.

Robert HayesReviewed in the United States on October 17, 2015
3.0 out of 5 stars
An audacious, if not entirely successful, cinematic collage
Verified purchase
I had no expectations going into SHADOWS OF FORGOTTEN ANCESTORS, mostly because I knew very little about it beforehand. What I can say now is that it was more interesting from an artistic point of view than the actual story it tells. The basic plot is about a boy, Ivanko, who falls in love with a girl, Marichko. However, fate conspires to keep them apart and a fateful turn of events sets Ivanko down a course that changes his life forever. The elements I liked about the film, and what makes it stand out, are the cinematography, use of color, costumes, and the occasionally poetic image. The camera-work was rather improvisatory and free-moving with lots of high-angle shots, often pointed at the sky. There was also a conscious choice in one sequence to film in black-and-white for narrative reasons, to visually depict the protagonist's emotional state. As for imagery, there were a few sequences which stood out. One early scene showed blood dripping over the lens as a way to show someone dying, transitioning respectively into red horses and some kind of red plant. There was also creative use of double exposure in a scene where the characters are overlaid onto religious iconography. All of this was engaging and unique in a way that the story wasn't. I have a feeling that more familiarity with Ukrainian culture and folklore would have made the story a little more accessible, but I don't really think that the story was entirely the point. In fact, the acting in the film really isn't that good, and the film often felt like a filmed stage play where the intended audience is already familiar with the character archetypes and tropes. It also doesn't help that the film is episodic, with awkward and occasionally jarring scene transitions. Overall, this film's value (to me, at least) lies in its images and music. I don't really see the average film-watcher taking the time to see this, but this could potentially be worth it for the more adventurous person.
5 people found this helpful

John DoeReviewed in the United States on December 3, 2020
4.0 out of 5 stars
Interesting cultural movie
Verified purchase
I enjoyed watching the segmented scenes and hearing spoken Russian with English subtitles.
One person found this helpful

Graveyard PoetReviewed in the United States on April 15, 2008
5.0 out of 5 stars
Paradjanov's Masterpiece
Verified purchase
This is a vividly visual and visceral film from the brilliantly unique and visionary director Paradjanov. It remains one-of-a-kind with its dazzling, colorful cinematography, hallucinatory and surreal, and its almost ethnographic depiction of ancient agrarian life and rituals in a community of the Carpathian mountains. It is a tragic love story and a story of the earth, which is like a forgotten folk song of intoxicating wonder.
15 people found this helpful

vReviewed in the United States on May 3, 2016
4.0 out of 5 stars
Interesting, but gloomy
Verified purchase
I liked the fact that the movie, being filmed in the sixties, has a very special feel to it. It is very whimsical and filmed with interesting special affects. I rated it 4 stars because it gave me a gloomy, doomed feeling of hopelessness that haunted me through the night.
2 people found this helpful

Builder LadyReviewed in the United States on August 24, 2014
2.0 out of 5 stars
Big disappointment
Verified purchase
This movie came highly recommended by a friend of a friend. Five of us watched it, or shoud I say 5 of us sat in front of the TV. Three slept through most of it. We all found it ponderous (as movies of that Soviet period could be). The movie maker is well regarded by many, so for film historians or film buffs maybe there is something there.
The photography was quite good,; colorful Urkrainian costumes; the story, a basic love story, yet for some reason hard to follow.
One person found this helpful
See all reviews
Back to top
Get to Know Us
Make Money with Us
Amazon Payment Products
Let Us Help You
EnglishChoose a language for shopping. United StatesChoose a country/region for shopping.
© 1996-2022, Amazon.com, Inc. or its affiliates