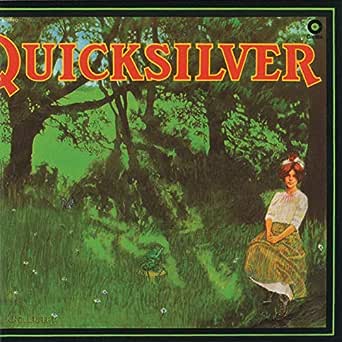 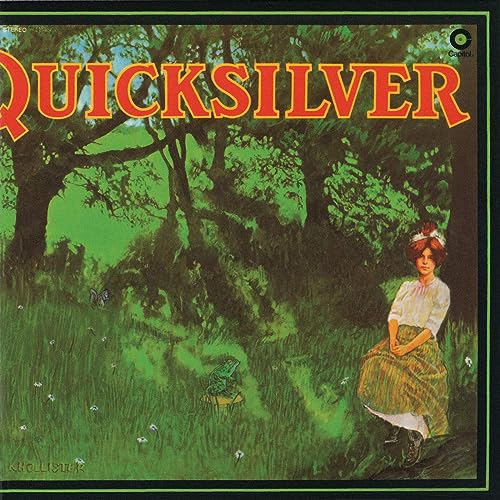 Geoffrey F. ArnoldTop Contributor: Firefly (TV Show)
VINE VOICE
4.0 out of 5 stars In a Shady Groove
Reviewed in the United States on August 25, 2011
Verified Purchase
I'm old. I'm a professional musician, too. And I remember QMS from waaay back.

This is a band that was uniformly inconsistent in some ways. The production quality of all their music was always very good. The writing suffered from various degrees of a lack of focus on what kind of band they wanted to be.

But that doesn't mean they were bad. Quite the contrary. QMS was a great band live. Less inconsistencies at their shows. But that said...

Shady Grove has some great music on it. In between are a few so-so tunes. But the highlights far exceed the "filler", which makes this album worth owning for fans of the whole San Francisco sound of the late 1960s. QMS was in the thick of it.

Favourite cuts: Joseph's Coat, Shady Grove and Edward The Mad Shirt Grinder, wherein Nicky Hopkins (who's played with just about everyone) gets to really stretch out. And the rest of the band is in fine form.

The musicianship of the collective members is without question. The production values are well represented. But, to be honest, QMS isn't for everyone and, since they were constantly searching for new things, the inconsistencies may put people off.

At the end of the day, QMS managed to create something for everyone, from Country tinged to the more progressive, with just a touch of classical influence.
Read more
2 people found this helpful
Helpful
Report abuse

David
2.0 out of 5 stars My mistake
Reviewed in the United States on January 18, 2014
Verified Purchase
I made two mistakes this past week. I ordered two CDs to fill holes in my collection, and both turn out to represent major lapses of taste. One was the Stones' "Their Satanic Majesties ... [yeah, right]" and the other was this. Personnel changes made since "Happy Trails" and personnel changes to come rendered Quicksilver simply boring and largely unmusical. A real pity. Their first two albums were among the very best of the psychedelic era. "Shady Grove" is, however, a long, hard fall before an even longer, harder one yet to come. Sic transit gloria, and then the appalling Dino Valenti/Chet Powers returned ... Can you tell I think "Shady Grove" sucks? Lousy singing, lousy songs, surprisingly poor musicianship at times, and a much-too miked up Nicky Hopkins piano. What a waste of talent.
Read more
2 people found this helpful
Helpful
Report abuse

Gary Lee
5.0 out of 5 stars A great Quicksilver album.
Reviewed in the United States on December 15, 2019
Verified Purchase
This is my favorite Quicksilver album. I got this in mp3 format to compliment my vinyl version. Nicky Hopkins does some great piano work.
Read more
Helpful
Report abuse

Thomas A. Barrett
4.0 out of 5 stars Four Stars
Reviewed in the United States on March 20, 2015
Verified Purchase
Great songs. Bad sound. But happy to have it.
Read more
Helpful
Report abuse

samuel clemmons
5.0 out of 5 stars Shady Grove my honey...
Reviewed in the United States on November 4, 2008
Verified Purchase
In the 60's, the SF Bay group Quicksilver Mess Serv was the best in concert. Edward the organ grinder took many young hearts away from faint breasts. Listen to a calssic and pretend that the newer groups can try to do better. (Nah, you won't believe it either.)
Read more
4 people found this helpful
Helpful
Report abuse

Jean-marie Croizat
5.0 out of 5 stars A 35 years' love
Reviewed in the United States on September 1, 2008
Verified Purchase
I've owned this lp since it has been released in France in 1969 or 70 and I think this lp is very complete except the long track which I don't like much. In this Lp Quicksilver who announced a little Little Feat, whise first lp is very close but less "baroque" and the Capitol reedition imported from Japan is excellent and the remastering is perfect !
Read more
Helpful
Report abuse

Terrell Gannon
5.0 out of 5 stars music lover
Reviewed in the United States on December 23, 2009
Verified Purchase
this cd has Nicky Hoppkins on it he is one of the best key board players around and has John Cipollina on it too
Read more
One person found this helpful
Helpful
Report abuse

Mike Reed
VINE VOICE
4.0 out of 5 stars Quicksilver Messenger Service - 'Shady Grove' (One Way Records) 4 1/2 stars
Reviewed in the United States on October 15, 2016
First released in 1969, every bit as good / memorable as the QMS first self-titled lp (see my review). Tunes here that truly show us what these musicians are capable of include the inspiring "Flute Song", the free-spirited "3 Or 4 Feet From Home", the well-received "Holy Moly", "Flashing Lonesome" and the nine-minute Nicky Hopkins-penned "Edward (The Mad Shirt Grinder)" - as I also liked hearing this tune played on their recent batch of archive live releases. My first time ever of hearing 'Shady Grove' all the way through. So much reminds me of Moby Grape, Grateful Dead and It's A Beautiful Day. A should-own.
Read more
3 people found this helpful
Helpful
Report abuse
See all reviews

Roger Murray
5.0 out of 5 stars This is almost up there with the classic QMS album Happy Trails
Reviewed in the United Kingdom on April 21, 2016
Verified Purchase
It is difficult to quantify why I love this album so much but here goes...its partly because when as a final year student I was mysteriously and unexpectedly struck down my chicken pox and had to stay inside flat in quarantine for two weeks, greatly relieved when a friend's kind younger brother brought me this album to listen to.
Of course the previous album "Happy Trails" had been the classic QMS album, unsurpassed as a live performance by a West Coast hippy era band with two exceptionally fine guitarists Gary Duncan and the great John Cipollina especially "Mona" which I regularly listen to.
Some have dismissed Shady Grove as an uninspiring mid-period poorly recorded album- how wrong is that! The recent reissue- coupled with a mediocre mid-1970s reunion effort Solid Silver is crisp and far-superior to the admittedly rather muddied sound on the original vinyl album. On the next album Just for Love- great cover artwork but hugely disappointing- Dino Valenti who was to have been in the original lineup but got busted for drugs so was out of action returned and totally ruined the band by imposing his mainly vacuous songs, leaving little room for the tight rhythmic interplay which had been the QMS trademark.
On Shady Grove Gary Duncan had left (to join Valenti in a doomed enterprise) and is much missed but the recruitment of English keyboard ace Nicky Hopkins took the band in a new and inspired direction. There are some weaker only half realised tracks (2-3) which I'll ignore. On the strong tracks (6) it is evident that Hopkins and Cipollina had developed a keen musical understanding- the eponymous title track and "Joseph's Coat" being the prime examples. The opening track with its cascading piano intro from Hopkins and then Cipollina's chopping guitar riffs never ceases to delight. "Flute Song" is slow and dreamy- not sure who sings it: the main vocalist is bass and viola player David Frieberg but Cipollina is also credited with vocals (he isn't on any other QMS album) so maybe it is him. It just washes over you with lyrical guitar and piano inter-play. "Three or For Feet from Home" and "Holy Moly" are fine uptempo numbers with cipollina again in great form on the first in particular. But it is the epic "Joseph's Coat" and piano-led instrumental "Edward the Mad Shirt Grinder" the stand-out tracks that make this album a must for any QMS fan.
JC has everything- strong vocal by Frieberg, mysterious Gregorian chanting, pyschedilic effects, tough and shimmering guitar riffs and one of Cipollina's best if too-short solos with Hopkin's piano always meshing well and adding to the wide soundscape achieved on this track. Similarly on Edward with Cippolina taking the stage in the slower middle section. Drumming by Greg Elmore solid and inventive throughout.
If only Gary Duncan when he returned to the fold had left Valenti behind in New York..With Duncan back and Hopkins still there musically the next album should have been a triumph but was patchy at best although you can hear the musicians on some tracks almost audibly straining for release from Valenti's mediocre songs..Only on "Fresh Air" and to a lesser extend on a Cippolina instrumental "Cobra" did they achieve this-- the other tracks are mainly thanks to Valenti complete dross.
Read more
2 people found this helpful
Report abuse
See all reviews