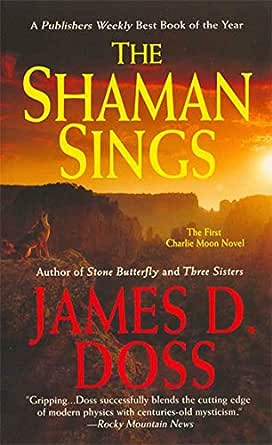 You've subscribed to Charlie Moon Mysteries! We will preorder your items within 24 hours of when they become available. When new books are released, we'll charge your default payment method for the lowest price available during the pre-order period.
Update your device or payment method, cancel individual pre-orders or your subscription at
Your Memberships & Subscriptions
There was an error. We were unable to process your subscription due to an error. Please refresh and try again. 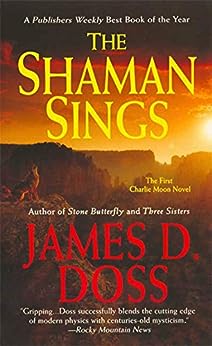 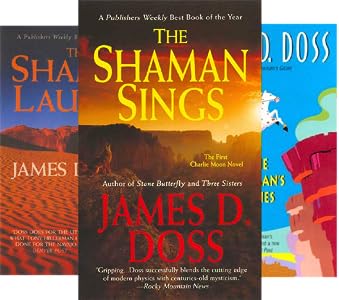 Science and mysticism, ghosts and hard-edged cop work combine to stunning effect in this first novel set in Native American lands of Colorado. Daisy Perika, an aged Ute shaman, sees images of imminent death in her dreams and outside her remote trailer. Daisy understands her visions. Not so Scott Parrish, chief of police in a nearby town, who has similar experiences while investigating the murder of Priscilla Song. Song, a researcher at the university, was stabbed to death while working on her computer. The obvious suspect in the university murder is the Mexican handyman, who compounds his guilt by taking off cross-country and leaving corpses in his wake. Yet soon after the murder, a miraculous breakthrough in the application of superconductors, Song's field, is announced by another professor. Clues in the case include cryptic letters the victim left on a computer screen, odd abrasions found in the roof of her mouth and the fact that her research is missing. Doss keeps his reader's attention focused by nimbly leaping among points of view: the killer answers to a hidden Voice; the cop stumbles along, comprehending little; Daisy's spiritual reveries are rife with legend and symbolism; the canny caretaker and a big, dumb cop named Piggy conduct a bloody yet oddly humorous chase that manipulates the reader's sense of sympathy. Doss, an electrical engineer, sets off quite a spark with this ambitious, successful debut.
Copyright 1993 Reed Business Information, Inc. --This text refers to an out of print or unavailable edition of this title.

“Fascinating…impressive…. Like Tony Hillerman, Doss is able to combine the supernatural with the modern in a compelling and believable book.” ―Woodland Hills Daily News

“Doss plots like a pro…an encore would be welcome.” ―Kirkus Reviews

As it often does, sex plays a role in the murder of an attractive and conniving grad student eviscerated in a university physics lab. Police zero in on the Mexican maintenance man who flees the scene, but a Native American shaman in the area (southwestern Colorado) envisions another suspect. Several characters, in fact, including the chief of police, experience foreboding dreams. A unique blend of Ute mysticism, Mexican fatalism, and university skepticism adds depth and color to a finely written first novel.
Copyright 1994 Reed Business Information, Inc. --This text refers to an out of print or unavailable edition of this title.

Ute Indian prophecy, scientific investigation, cryptanalysis, and old-fashioned intuition join forces to solve the murder of star Rocky Mountain Polytechnic grad student Priscilla Song, whose breakthrough research in room-temperature superconductivity would have made her rich and famous if she hadn't been strangled, stabbed, and gutted (a case of demented overkill that's one of the very best clues in this well-clued mystery). While his Keystone Kops chase the obvious suspect, handyman Julio Pacheco, all over Colorado, catching up with him to their repeated cost, Granite Creek Police Chief Scott Parris- -blessed or cursed by premonitions himself--teams up with reporter Anne Foster to track down the physicist who plotted to steal Priscilla's discovery; but it's old Ute shaman Daisy Perika who finally brings down the killer. Newcomer Doss tips his hand a little too early, but he plots like a pro while playing different ways of knowing off against each other. An encore would be welcome. -- Copyright ©1993, Kirkus Associates, LP. All rights reserved. --This text refers to an out of print or unavailable edition of this title.

The shocking death of a female physics student has shattered the peaceful community of Granite Creek, Colorado―and police chief Scott Parrish has a hunch he can't even begin to explain. He saw the killing…in his dreams.

Daisy Perika experienced the same visions. An aged Ute shaman who lives in a trailer on the lonesome highlands, hers is the realm of the Native American spirit. But Daisy doesn't need scientific proof to know that the student's breakthrough discovery was to kill for. And it isn't over yet.

Parrish wants to believe that Daisy can unleash the truth. But will her visions of Coyote and fire make for evidence in a court of law? Now it's up to Parrish and Daisy's nephew, Tribal Police investigator Charlie Moon, to summon the supernatural and seize the killer―before he strikes again…

James D. Doss is the author of the Charlie Moon mysteries, including A Dead Man's Tale and The Widow's Revenge. Two of the Moon books were named one of the best books of the year by Publishers Weekly. Originally from Kentucky, he divides his time between Los Alamos and Taos, New Mexico.

4.3 out of 5 stars
4.3 out of 5
156 global ratings
How are ratings calculated?
To calculate the overall star rating and percentage breakdown by star, we don’t use a simple average. Instead, our system considers things like how recent a review is and if the reviewer bought the item on Amazon. It also analyzes reviews to verify trustworthiness.
Top reviews

Lover of Books
4.0 out of 5 stars 5-Star story; 3-Star e-version editing.
Reviewed in the United States on May 3, 2017
Verified Purchase
James D. Doss' Shamin books are one of my all-time favorite series. I've had them as paperbacks almost since he began publishing them, so I recently decided I just had to have them all in my Kindle. The stories are still some of the funnest (poetic license here) reads on the planet, but I'm very disappointed in the e-version quality. Many, many errors in what must have been a piss-poor scanning or transposing process. The e-books are costing me more than the paperbacks did; is it too much to expect decent editing?
Read more
13 people found this helpful
Helpful
Report abuse

Kevin M. Orth
5.0 out of 5 stars masterfully written and very engaging
Reviewed in the United States on March 4, 2017
Verified Purchase
Wow! Wow, wow, wow. This is really two complete novels in one. The first is a very engaging detective murder mystery and the second is the etherial world of a Native American Shaman.

Both are masterfully written and very engaging. I'm so glad this is the first in a long series. I cannot wait to see where the author takes us in this long, meandering journey!

Amazon Customer
5.0 out of 5 stars You can feel the wind and smell the piñon smoke
Reviewed in the United States on January 10, 2021
Verified Purchase
James Doss’s Charlie Moon novels are a delight. The introduction of Chief Paris in this one was very satisfying. A policeman who senses the currents of the invisible world is an interesting friend for Aunt Daisy Perika. I always look forward to a James Doss novel.
Read more
Helpful
Report abuse

Famed Girl Archaeologist
5.0 out of 5 stars Very Interesting Read
Reviewed in the United States on December 2, 2016
Verified Purchase
This was my introduction to this series by James Doss, and I believe it is the first in the series. It was said that it is a "Charlie Moon" mystery, but I found that Charlie was only introduced in the book, with the focus being on another character - a chief of police. It was a very written and interesting book. I will definitely look for my James D. Doss mysteries.
Read more
5 people found this helpful
Helpful
Report abuse

KRM
5.0 out of 5 stars EXCELLENT STORY
Reviewed in the United States on January 4, 2021
Verified Purchase
I love this series about some characters around Granite City. I just finished this book but I have read many of the later ones. The characters were all very interesting and mostly likable. The storyline was well written and straightforward.
Read more
Helpful
Report abuse

Kathleen Loughlin
5.0 out of 5 stars verdaeni on 'the shaman sings'
Reviewed in the United States on January 22, 2003
Verified Purchase
This is a great book for people that like some humor with their mysteries. Although the titles of this series sound like the shaman is going to be the main protagonist, it doesn't work that way. There is a very humorous interaction between Charlie Moon, of the Tribal Police, who doesn't believe in magic, and his Grandmother who pretends she doesn't when around the priest but who sneaks out to confer with the local landspirit, a type of dwarf. The mystery is well thought out and kept interesting by the complex (but not TOO complex) characters. Of great importantce to me is that the characters also act within their characterization and motivations. This is a particular joy in this book where Charlie and his Grandmother are often working at cross purposes motive wize and a delightful weave of information back and forth as you move towards the ending. The grandmother in particular is sort of a ute 'maxine' with never a good word to say and a hillarious lineup of grumbles and mumbled complaints.
Read more
15 people found this helpful
Helpful
Report abuse

William D. Funk
1.0 out of 5 stars What a misadventure. If you like Hillerman, don't even bother reading this.
Reviewed in the United States on January 14, 2014
Verified Purchase
I bought this and 3 other Doss books. There are 254 pages. Charlie Moon shows up once on page 246. He is not part of the story. This also not a Native American story. Doss threw in random references that had nothing to do with a Shaman singing. The main characters are Caucasian and Mexican. It supposedly is about a major physics discovery, followed by murder, in a small college in a small town staffed by poorly trained, bumbling, police. There is nothing remotely similar to what Tony Hillerman has written. Reader beware.
Read more
7 people found this helpful
Helpful
Report abuse

E.R.
2.0 out of 5 stars Mediocre
Reviewed in the United States on August 9, 2017
Verified Purchase
The characters were unconvincing and flat, and Charlie Moon didn't even show up until near the end of the story, at which time he didn't do much. I read as fast as I could, especially while the development of a tangential character, whom it was clear had little to do with the main story, dragged on.
Read more
2 people found this helpful
Helpful
Report abuse
See all reviews