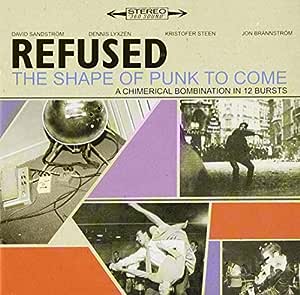 The Shape of Punk to Come: A Chimerical Bombation In 12 Bursts

It's a ballsy move to claim you're reinventing a musical genre that has been slogging along quite happily for more than two decades, but the Refused back up their chutzpah with an absolutely awe-inspiring and fearless slab of musical mayhem. The Shape of Punk to Come is nothing short of a punk-rock manifesto. Hardcore pathos is merely the foundation for their architecture: upon that they build an edifice of political expression with a take-no-prisoners approach to the search for artistic meaning and a musical liberation that includes elements of speedcore, free jazz, electronica, lo-fi, and absolutely no pop. Politics, art, and music merge into one monolithic whole. The disc starts with the spoken epigraph, "They told me that the classics never go out of style, but they do, they do," followed by a swirling mess of noise that finally jells into the last undiscovered thunderous riff of "Worms of the Senses/Faculties of the Skull." The song stutters, then speeds along, skips, pauses, then rolls. They follow that with the groovy Gang of Four metronomic punch of "Liberation Frequency." When vocalist Dennis sings, "We want the airwaves back" in a sweet falsetto that belies his ability to deliver a screech not unlike a bull alligator clearing its throat, you believe this band isn't going to gently rise up the Billboard charts; they'd rather storm the ramparts. Unfortunately, when the band writes a song called "The Refused Are Fuckin' Dead," they aren't kidding around: the band broke up before the release of Shape. Let's hope enough people hear this album to kick-start the revolution. --Tod Nelson