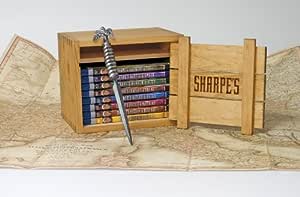 Sharpe's Collector's Edition Map of Europe during the Napoleonic Wars

All conveniently stored in a custom-made, wooden box emblazoned with the Sharpe s logo

Acclaimed actor Sean Bean (North Country, Flightplan, The Lord of the Rings) stars in this action-packed series set in the midst of the desperate missions and battles of the Napoleonic Wars. Adapted from Bernard Cornwell's bestselling novels, Bean portrays maverick British officer Richard Sharpe who rises through the ranks of Wellington's army by his own daring deeds and ambition. Fast-moving, hard-hitting adventure, Sharpe brings to the screen all the danger, romance and sheer spectacle of one of the bloodiest periods in English warfare.

4.3 out of 5 stars
4.3 out of 5
65 global ratings
How are ratings calculated?
To calculate the overall star rating and percentage breakdown by star, we don’t use a simple average. Instead, our system considers things like how recent a review is and if the reviewer bought the item on Amazon. It also analyzes reviews to verify trustworthiness.
Top reviews

Masher
1.0 out of 5 stars Start with this one and you'll end with it
Reviewed in the United States on February 15, 2001
Verified Purchase
Had the first of the Sharpe's episodes I viewed been this one, it would have been my last. Most of the series rises above the the genre of pulp escapist adventure-- this one sinks below it.
The screenplay is the culprit here, filled with laughably improbable plot devices and threadbare cliches. It seems a band of Spanish Freedom Fighters are actually a secret religious cult, practising human sacrifice based on Aztec rituals (mysterously imported into Spain hundreds of years before the 1813 setting). This band of merry men has captured some English deserters, and wants to exchange them for modern rifles. Sharpe is chosen for the mission, but upon discovering their true nature is so horrified, he slays them all and dynamites their mountain base.
If you're not bothered by his company routing a far larger number of well-armed and experienced men in a strongly fortified position (all without taking any casualties), then you certainly won't shrug at Lord Wellington's teenage niece coming along for the ride. This lovely, well-bred young lass needed only an intense glance from Sharpe, before she's ready to be plowed by him (Lt. Ayres' words, not mine) whenever and wherever, even next to a pile of freshly sacrificed corpses. Oh, she's also a crack shot ("I only hunted rabbits before Sir!") and assists in the military victories also. That is, before she is captured, given mind-altering drugs, and prepared for sacrifice by having her perky young breasts painted with Aztec symbols. Will Sharpe arrive in time to save her? Such drama!
If you consider your collection incomplete without the entire series, buy this episode. But take my advise-- leave the shrinkwrap intact.

pmonnat
5.0 out of 5 stars Hours of enjoyment!
Reviewed in the United States on October 2, 2011
Verified Purchase
I decided to buy the Blu-Ray version after reading about the poor video quality on the DVDs. The early episodes didn't have the best picture quality, but that didn't really interfere with our viewing enjoyment. Also, gotta love the eighties-esque electric guitar in the opening theme. My only complaint is that the last two movies, "Sharpe's Peril" and "Sharpe's Challenge", came out after this set was compiled. But I bought those separately and they still fit in the wooden box. MORE SHARPE PLEASE! Now to read the books...
Read more
6 people found this helpful
Helpful
Comment Report abuse

Kevin Brown
3.0 out of 5 stars A weak entry in a great series
Reviewed in the United States on March 20, 2015
Verified Purchase
A rare misfire in an excellent series. The writers of this episode just threw the Bernard Cornwell book out and instead developed a ludicrous plot that hardly makes sense. The performances are still outstanding and Sean Bean and Daragh O'Malley turn in their usual outstanding performances. Well worth watching despite the silly and convoluted plot (I still don't see why they did not tell the same story as the novel).
Read more
Helpful
Comment Report abuse

Alberta Haught Goshorn
5.0 out of 5 stars We're Fans of Sharpe
Reviewed in the United States on March 15, 2014
Verified Purchase
My husband got me "hooked" on Sharpe, so I have been trying to complete his collection. Both of us liked this one very much, despite having read a very negative review of it on your website. Goes to show that all movies are not equally liked by all viewers. It's good to be individuals and be allowed to state our own feelings even when they differ from those of our neighbors.
Read more
Helpful
Comment Report abuse

Optical Bunny
5.0 out of 5 stars Great series
Reviewed in the United States on June 8, 2011
Verified Purchase
I love the series both as the books and the films. Of course, this being BBC, you can tell that they were budget constrained when a regiment now consists of 6 or 7 men. Some of the video transfer quality to Blu-Ray is less than stellar as well. But overall, an enjoyable product and the placement in a mini-ammo crate is a lot of fun and I even use the letter opener. Lots of fun and well worth the money.
Read more
4 people found this helpful
Helpful
Comment Report abuse

John T. Penniston
1.0 out of 5 stars Not Almeida but human sacrifice instead
Reviewed in the United States on January 28, 2017
Verified Purchase
I agree with the other reviewers; this video has almost no relationship to the book of the same name. Instead it has a rather far-fetched plot about descendants of the Incas tearing the hearts from living victims. It is complete with a beautiful woman about to be sacrificed in this manner, only to be saved by Sharpe. I wish I had read the other reviews before I got this.
Read more
Helpful
Comment Report abuse

Sonoma Girl
4.0 out of 5 stars Endless enjoyment!
Reviewed in the United States on September 17, 2012
Verified Purchase
Though each episode as titled on the DVD does not "match" the content of the novel with the same title, it really does not matter. All the relevant events necessary to make Sharpe's story real come to life on the DVD's. We have already enjoyed watching them twice! I do wish, however, that the map included with the set were of Spain and Portugal so we could have followed Sharpe's adventures (it is of Europe with only a sliver of eastern Spain)! And who can't watch hours of Sean Bean!!??
Read more
One person found this helpful
Helpful
Comment Report abuse

Dean Allison
5.0 out of 5 stars If only they had made more
Reviewed in the United Kingdom on January 29, 2011
Verified Purchase
This is worth every penny they ask for it, EXCELLENT.

If you are remotely interested in the subject you must buy this, I missed it when it was on the TV but enjoyed it on DVD so much my only disapointment was closing the box when it was finished.

They just don't make stuff like this anymore, I'd be one of the first to buy if they did and recommend the box set to everyone.

Glen (Apache)
5.0 out of 5 stars Look Sharp, Sharpe. lolol
Reviewed in the United Kingdom on March 11, 2015
Verified Purchase
I loved the series when it was on TV and I still love it now. Okay they don't stick to the books but you like TV films were the good guys are good and the bad guys are just pure evil you'll love this set of DVDs.
Read more
Report abuse

E A James
5.0 out of 5 stars Sean Bean
Reviewed in the United Kingdom on May 1, 2016
Verified Purchase
Sean bean is great in this role. Great stories and good acting by all the actors. Hours of entertainment. Enjoy.
Read more
One person found this helpful
Report abuse
See all reviews