Bring your club to Amazon Book Clubs, start a new book club and invite your friends to join, or find a club that’s right for you for free.
Explore Amazon Book Clubs
Flip to back Flip to front
Listen Playing... Paused   You're listening to a sample of the Audible audio edition.
Learn more
See all 9 images 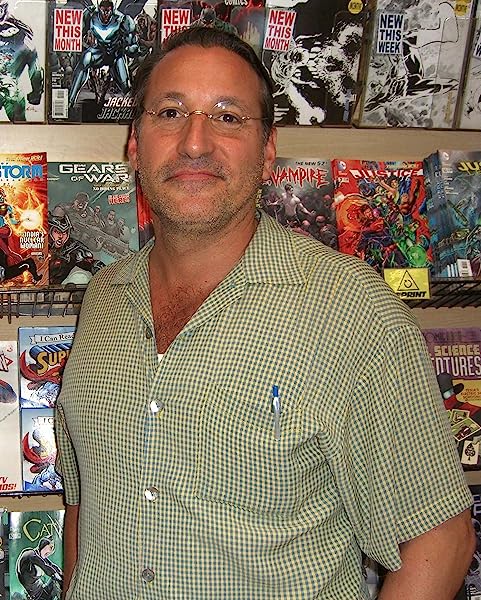 Chip Kidd is an award-winning graphic designer and writer, and an editor-at-large for Pantheon Books. His books on comics include Bat-Manga!, Peanuts: The Art of Charles M. Schulz, and Marvelocity: The Marvel Comics Art of Alex Ross. He lives in New York City. Geoff Spear is an award-winning photographer whose work has appeared on numerous book covers. He lives in New York City.

4.5 out of 5 stars
4.5 out of 5
56 global ratings
How are ratings calculated?
To calculate the overall star rating and percentage breakdown by star, we don’t use a simple average. Instead, our system considers things like how recent a review is and if the reviewer bought the item on Amazon. It also analyzes reviews to verify trustworthiness.

Richie Jingles
5.0 out of 5 stars Incredible imagery
Reviewed in the United States on January 4, 2011
Verified Purchase
I discovered comic book fandom in 1965 at the age of 13, after being a comic book fanatic all my young life. I immediately began ordering fanzines and the lower priced golden age books. One of the first was a 1946 issue of Captain Midnight,( $1.50,HA!)which was a pretty lousy comic book, but real interesting to me simply because of it's age. It was like an archaeological dig, holding these books that came out before I was born. But what was really fascinating to me were several pages advertising the very Captain Marvel merchandise pictured in this book! This really blew my mind because I'd never even heard of Captain Marvel... I was a Superman kid, and was always fascinated by his derivatives, which were legion in all the Superman books. There was always another super guy from another planet or circumstance, wearing yet another costume variation. But here was an entirely different but still in the same genre character who was obviously very popular in his time and he was a total mystery to me! I did'nt get the whole story until a year later when I got an issue of Alter Ego ( still a mail order fanzine then) which featured the whole Marvel Family. Having said all that, this book is an absolute visual delight, pure conceptual mind candy, beautiful graphics, all mysteries revealed! If you're a real comic book historian, like me, you'll pour over this book again and again.
Read more
One person found this helpful
Helpful
Comment Report abuse

Mark Luebker
5.0 out of 5 stars A visual feast!
Reviewed in the United States on November 11, 2010
Verified Purchase
Most people seem to love the Chipp Kidd's work or hate it. I'm in the former category, and THIS book just knocked me out.

A word of warning: If you're looking for yet another recounting of the history of the original Captain Marvel, look elsewhere--this is not the book for you. There are plenty of excellent histories to be had, and a subscription to PC Hamerlinck's FCA is a great way to supplement them.

However, if you're looking for a gorgeous collection of photos of the incredible range of Captain Marvel and Marvel Family ephemera that Fawcett and its partners produced during the 13 golden years those characters were in print, stop wasting time reading this review and place your order NOW. This is a must-have.

I've long been fascinated by the incredible range of merchandising that Fawcett did for these characters--an idea decades ahead of its time--and here are stunningly detailed photos of the best of it, including some of the rarest stuff, repros of original designs for some pieces, and even side-by-side comparisons of original art pages and published comics.

This is what I'd hoped the DC Vault and Marvel Vault books would be. While Shazam!: The Golden Age of the World's Mightiest Mortal doesn't include facsimile reproductions like the Vault books, it shows so much more of the Marvel Family and Fawcett merchandise than either of the former does of their subjects that it just blows them away.

This is a book I'll be returning to it again and again, a visual feast. Heck, the quality of the photos and the amount of detail has me thinking about attempting my own facsimiles or reproductions of some of the items, since that's probably the only way I'm ever going to have examples of the really rare and really cool stuff. I'm already trying to decide whether to use Sculpey or Play-Doh to try my hand at one of those Cap syroco figurines...

Scott West
5.0 out of 5 stars Best book this year
Reviewed in the United States on November 23, 2010
Verified Purchase
This is simply the best book I've bought this year. Period.
As a Captain Marvel fan, this is a MUST OWN. If you enjoy 1940s or 50s comics, toys, memorabilia, or just cool stuff about that era of superheroes then buy it as well.
The price is right on the money for this hardcover. The book design is superb. It's fantastically photographed with a lot of good concise info about the world's mightiest mortal. This book gives a great glimpse into what it must have been like to be a kid in the 40s wishing you could say "SHAZAM!" to become our favorite big red cheese but settling instead for the many different novelties and toys one could find in the corner five and dime. There are a lot of rare vintage items that I've never seen before, some only having a couple known examples. My only wish would have been to include a complete list of all the items in the book for us collectors to use as a reference. Chip, take note for the next book.
Overall, this book excels as a reference for vintage Captain Marvel merchandise. There are some examples of the comic stories and art but that isn't the focus. I hope Chip Kidd does many more books like this one. I think I'll go back and buy his "Batman Collected" book after thoroughly enjoying this one.
Read more
6 people found this helpful
Helpful
Comment Report abuse

Amazon Customer
5.0 out of 5 stars A history not really a comic but still interesting
Reviewed in the United States on March 7, 2019
Verified Purchase
Beautiful book with awesome information. I thought i was buying a comic book but i’m not disapointed with this. If you want to learn the history and see some vintage items like toys letters and a little peek at some of the comics check this out.
Read more

Outerlimit
4.0 out of 5 stars Shazam! The Golden Age of the Worlds Mightiest Mortal
Reviewed in the United States on May 28, 2012
Verified Purchase
The original Captain Marvel is a wonderful and vital piece of Americana.He and his Marvel Family were the stuff kids and servicemen of WWII resorted to for whimsy and patriotic distraction.Capt. Marvel would sock his opponents and have a great sense of humor.His adventures were inspiring and fun.
All this gave rise to extraordinary merchandising and it is this that Chip Kidd has preserved and reproduced in this delightful work.
It is only a shame (as other reviewers have said) he could not have included some of C.C.Beck's original art in the book....and that there is not even more of the book!
I am grateful for this labor of love.If you are a Captain Marvel fan it is essential.
Perhaps someone can tell me why Captain Marvel was a mortal?
This is a lovely coffee table book that is beautifully produced and great value .
Read more
Helpful
Comment Report abuse

Brian K Morris
5.0 out of 5 stars A Great Book For A Classic Character
Reviewed in the United States on October 13, 2012
Verified Purchase
This lovely book covers the Golden Age history of the original Captain Marvel. This book is lavishly illustrated with not only panels from the classic days of this character, but also toys, foreign editions, original artwork, and more. You also get a loving look at Mary Marvel and Captain Marvel, Jr.

I could have stood a little more on Tawky Tawny and Uncle Marvel, but the book is well worth the price and a delight to read.
Read more
Helpful
Comment Report abuse
See all reviews

Allan Carin
5.0 out of 5 stars A trip down nostalgia lane
Reviewed in Canada on January 13, 2011
Verified Purchase
For anyone brought up with comics in the 40's this book will delight and bring back fond memories of the greatest super hero of them all. Captain Marvel was the ultimate hero to young boys. The comic covers and actual reproductions of some of the stories combined with the wonderful art of Mac Raboy and C.C. Beck is a wonderful trip down memory lane.
The paraphernalia offered though the comic books at the time was a dream come through and it's all compiled in this fascinating book. Just 10 cents an issue. Try and match that now. This a must buy for all comic book fans.
Read more
Report abuse

Jack Nemchin
3.0 out of 5 stars More memorabilia, photos, etc. than stories.
Reviewed in Canada on March 30, 2019
Verified Purchase
Not very excited about the book. Not what I expected.
Read more
Report abuse
See all reviews