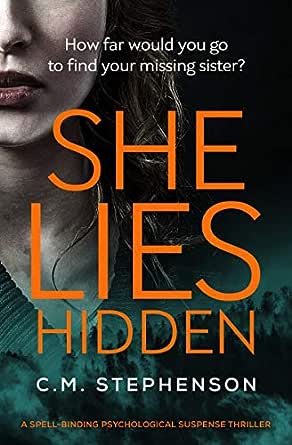 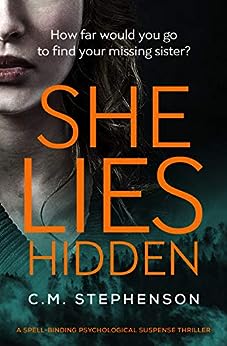 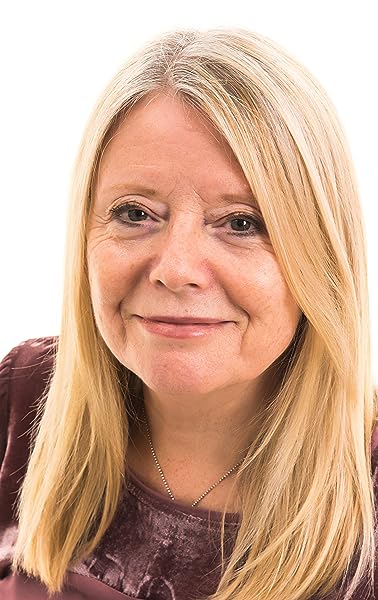 C.M. Stephenson grew up amongst the villages and moorlands of Lancashire. In 1974 she took a train to Cornwall and never moved back.

Her professional background includes human resource management, personality profiling and training and development. She is a qualified executive and corporate coach.

In 2008, she and husband started a brand new life in South Gloucestershire.

She studied creative writing with Open University and has an MA Creative Writing from Bath Spa University. Her work was included in the Sparks Anthology 2016.

4.6 out of 5 stars
4.6 out of 5
67 global ratings
How are ratings calculated?
To calculate the overall star rating and percentage breakdown by star, we don’t use a simple average. Instead, our system considers things like how recent a review is and if the reviewer bought the item on Amazon. It also analyzes reviews to verify trustworthiness.
Top reviews

helen hamilton
5.0 out of 5 stars She lies hidden
Reviewed in the United States on October 30, 2018
Verified Purchase
A very well written book about girl's Missing especially one womens sister. She is looking for answer of what happened over twenty years ago, and who was involved. When the body is discovered she will find out who is responsible
Read more
One person found this helpful
Helpful
Report abuse

K. Sprowl
5.0 out of 5 stars Unputdownable, I agree!
Reviewed in the United States on November 11, 2018
Verified Purchase
I am a serial devourer of whodunits, and this was one of the best! I am not often surprised at the solution. I was THIS time!
Read more
3 people found this helpful
Helpful
Report abuse

Stevie
5.0 out of 5 stars Loved it!
Reviewed in the United States on February 16, 2020
Verified Purchase
This book gripped my attention from the very start! It was well written and was definitely a psychological thriller! I loved the way in which it kept my attention.
Read more
Helpful
Report abuse

Kindle Customer
5.0 out of 5 stars Great Book
Reviewed in the United States on October 7, 2018
Verified Purchase
I really enjoyed this book. It was so suspenseful that I couldn't put it down. I would definitely recommend it.
Read more
One person found this helpful
Helpful
Report abuse

donnasbookblog
4.0 out of 5 stars An impressive debut!
Reviewed in the United States on September 26, 2018
I was hooked by the blurb for this one, it sounded excellent and I couldn’t wait to get started!! And that cover is to die for…

I really enjoyed the idea behind the story and the plot was clearly well planned out. I enjoyed the characters and thought that they worked well together.

There was a tad too much detail for me in places and I think that detracted from the main storyline at times and could confuse some readers but overall it was a well written story that ticked all the right boxes for me!

I enjoyed the different view points used to tell the story and how it went from past to the present to give the background more detail – an impressive debut – 4 stars from me and can’t wait to see what she releases next!
Read more
2 people found this helpful
Helpful
Report abuse

Alison
5.0 out of 5 stars Unputdownable mystery.
Reviewed in the United States on September 24, 2018
Two girls, unconnected to each other, went missing in 1973. The remains of one has just been found. Where is the other one? What happened? Who did this?
Thomasine Albright's sister went missing and has just been found. She's been living with this unknown for 37 years and it has destroyed her family. She's a DI with the Family Liason Office and I believe her sister's disappearance caused her to follow this career path.
The discovery of Karen's remains sets in motion a series of events. Various characters see the news in the newspapers and/or on television and the story develops from there. Lily, her narrator, the artist, Jimmy - where do they fit in? What is their influence?
The story is told from various characters narrative and this adds to the mystery of the story. Through the words of the characters you start to place things in order and the whole story is laid open leading up to the impact-laded ending.
I really enjoyed this book, in fact, once I started it I could not put it down.
Read more
One person found this helpful
Helpful
Report abuse
See all reviews

Aurora
3.0 out of 5 stars Good in Parts
Reviewed in the United Kingdom on September 27, 2018
Verified Purchase
Much of this book is very bewildering and sometimes requires reading over again to try to work out what is going on, especially as it focuses on different people, told in their own voices, at different times without identifying them. This may be acceptable occasionally, or, for one character, but becomes confusing when done too often and for several different characters.

At other times it is gripping, holds the attention well and makes the reader care about what is going on. I found myself absorbed and unwilling to put the book down.

In the early chapters it would appear that someone is watching Lily, they seem to know her very well, they follow her and even watch the events leading up to, and including, her accident. There is never any explanation for this.

At one point a character is outside the home of another, looking in as the second character is interacting with his wife. We are given to understand that the outsider poses a threat to the other person but because he sees an intimate moment between the couple he creeps away and takes no action. This makes no sense.

Other characters are mentioned with no real context and their relevance to the story is unclear. For example although we know what the significance of Ellen Williams was, we don't know how she came to be involved with Lily.

At the end of the book we are left with a number of unanswered questions, including how Veronica came to be on the moors, what exactly Paula's role was, what was the significance of the photographs Bennett had and how did he come to have them? Why was a European arrest warrant issued for the original investigating officer, Frank Tanner?

I am conflicted about this book because the good bits were very good but, there were too many voices introducing too many bitty strands in the beginning. The male voices were also confusing because they were not identified and it was often difficult to work out who was in a café or a cheap B&B, who was doing what elsewhere and that confusion continued for much of the book.

Those conflicts give me problems in rating this book. If it had been told in a more straightforward manner and the loose ends tidied up a little better, it could have been a solid four star but the confusion it engenders would make it a one or two star but weighing up the pros and cons, I am going with a three star rating
Read more
4 people found this helpful
Report abuse

livia Sbarbaro
5.0 out of 5 stars A Spellbinding Dark Jagged Thriller..with Secrets Lies and Murder
Reviewed in the United Kingdom on June 17, 2019
Verified Purchase
D.I.Thomason Albright was just a child when her sister went missing on a Cold Winter many years before..It's something that has never left her..The not knowing killed her father, made her mother retreat into her own little world and haunts Thomasine's dreams..When she leaves the farm she grew up in and joins the force she still hopes one day to find her sister. When she is informed they have found her sister Karen's remains she is told she must have nothing to do with the case ..it has been assigned to another , D.I .Mel Philips. Thomasine makes her mother a vow she will find who killed her sisters killer.But Karen was not the only one to go missing at that time..Thomasine's best friend Rosie's sister Veronica vanished as well.As Thomasine digs deeper into the past ..D.I. Mel Philips and her team are uncovering the past of a woman who lies in a twilight world..And what Thomasine finds is what happened back then ..is about to come blowing like a whirlpool that has lain dormant in the darkness to bring with it secrets lies and murder in its wake..This is a spinechilling dark Jagged chiller of a read one where innocence is lost , dreams are broken and a spellbinding electrifying read ...
Read more
One person found this helpful
Report abuse

J. S. Lewison
5.0 out of 5 stars Check your locks....
Reviewed in the United Kingdom on October 16, 2018
Verified Purchase
This novel immerses you in a wintry landscape of bleak moorland, grotesque locked up secrets and the dark side of Northern Soul. Initially, the narrative makes demands. Who are these people speaking to us and should we trust them at all? Then for me, the scene in the pathologically clean home made the whole story take off. After that scene, I couldn't put my kindle down. The narrative closes about your imagination and this writer knows her genre very well. I loved the way the writer uses detail so evocatively and makes you use all your senses to place you where you really don't want to be as it's so threatening. Think Prime Suspect, Jo Nesbo and even Wuthering Heights!
Gripping! And the fetid finale was superb. No spoilers but revenge was perfectly in tune with the bleak! I cheered!
Read more
2 people found this helpful
Report abuse

Amazon Customer
5.0 out of 5 stars Wow!
Reviewed in the United Kingdom on December 31, 2018
Verified Purchase
Fantastic and engaging read! (I rarely write reviews although I read a lot of this genre). This reminded me very much Lisa Gardner my ‘introduction’ to these types of thrillers. I see very mixed reviews for this book, (all the good books usually have them!) it’s a straightforward but descriptive and passionate story that is most definitely well worth a read! I savoured the book, didn’t want it to end in some ways, but had to keep reading until the satisfying end! This book needs more attention paid to it than some easy thrillers. If you are looking for quick thriller ‘feels’ with lots of unecessary twists, look elsewhere. If you are after well written, deep(er) and descriptive, ....read this book!
Read more
2 people found this helpful
Report abuse

Eilidh Horder
5.0 out of 5 stars Gripping, beautifully written and full of twists
Reviewed in the United Kingdom on October 14, 2018
Verified Purchase
From beginning to end, I absolutely loved this book and found it hard to put down. All the twists and turns kept me guessing throughout. The web of events and characters are skillfully woven together in unexpected ways, and all with such beautiful descriptions. I felt as though I was there, watching, experiencing the whole story (or rather, stories): the horror, the sadness, as well as the love and human connection... and disconnection. A real page-turner.
Highly recommended!
Read more
One person found this helpful
Report abuse
See all reviews