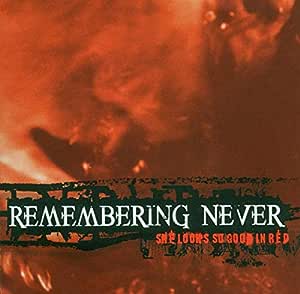 She Looks So Good in Red

Floridian hc combining ma_s.ve guitar tones with lots of percussion. Featuring the vocalist of Until The End....see site for more info.

Amazon Customer
4.0 out of 5 stars Yes Please!
Reviewed in the United States on April 14, 2003
Remembering Never is back with their second release (first for Ferret) and Debut Full-Length. In the time since the release of their last record Remembering Never went through a number of changes including the loss of their vocalist. For me their old vocalist was the one who kept it together, his voice was one of the main reasons I enjoyed the band so much, now bring in Mean Pete (who was always in the band as a guitarist) on vocals. He has a good voice to an extent, I do not think he can do the singing parts that were so much a factor in their debut, but the screaming he pulls off well. The band re-recorded three songs two from the EP and 'A Clearer Sky' which was a demo only track, and I think this is where my major problem with the record is. As I said I don't believe Pete can do the singing, and to be honest he kind of butchers the re-recorded songs, now if there was no original vocalist, then I would not be saying this because there would be nothing to compare Pete to. Now me saying all of this does not mean I hate or even dislike this record, It's just my opinion on some of the things that shouldn't have been done or changed. Regardless the new music on this record is exceptional. Powerful and Intense from start to finish, with incredible melodic interludes and extraordinary drumming. My favorite track on this has got to be 'The Moment You Realized...' displaying that rage induced homicidal passion Pete is known for, while the power of the music just kicks you in the .... Even after alot of the issues I have with this I can honestly say that it is a very good record. If you enjoyed the old record chances are you'll enjoy this one. Pick it up.
Read more
4 people found this helpful
Helpful
Comment Report abuse

LeftManOut
5.0 out of 5 stars The Essential Remembering Never Disc
Reviewed in the United States on November 12, 2006
Ok so this page seems to be littered with people who have absolutely no idea what they are talking about, or what this band actually sounds like. I am here to give you an accurate description of this record. "She Looks So Good In Red", Remembering Never's first full length which was released back in 2002, is very much a depiction of what the hardcore scene was like at the time : Brimming with creativity. Let's remember that melodic hardcore of this sort didn't become widely imitated till about 2003 (although some argue the true beginning of the trend started in 1999 with Poison The Well's "Opposite Of December", and in many cases it did), and up until that point many of the best records the genre has seen (Poison The Well's "Opposite Of December" and "Tear From The Red", Skycamefalling's "10.21", From Autumn To Ashes "Too Bad, You're Beautiful") were released. "She Looks So Good In Red" rightly deserves a lot of merit along with those aforementioned albums, because this was absolutely one of the most creative and well written records of the time. Those following the band now already know that this bears little resemblance to the sound they currently maintain, but this doesn't factor into the quality at all. "She Looks So Good In Red" is still classic.

While now adays Remembering Never could be more compared to bands like Bury Your Dead and Hatebreed, this record is almost a complete 180. In fact I'd put "She Looks So Good In Red" much more in the field of records like "Too Bad, You're Beautiful" by From Autumn To Ashes. This means there is a wide variety of dissonance and punishing rhythms, but also suitable doses of intriguing (and well placed) melody. The Slipknot and Mudvayne comparisons are laughable, since both musically and vocally this band sounds nothing like either. Those looking for "metal", should just stick to listening to Lambo of God and other stuff like that, because this is not conventional metal. Those saying that these songs are "crammed full of breakdowns to make the scenesters happy" obviously haven't listened to the later material this band has put out. Compared to their music now adays, it would almost seem that this album is lacking in that department. This is because four years ago breakdowns weren't the complete focus of the music. Sure they were in the songs and people loved them, but the memorable parts of the tracks were usually the clean vocals and the sing-a-longs. The breakdowns though are usually done well, much like many other similar bands from the same time.

So about the actual cd. This album is very different musically and lyrically from the band's later output. There's an outstanding use of acoustic guitars, both as intros and interludes inside the tracks ("Feathers In Heaven", "Meadows"). Oh and let's not forget the magnificent acoustic driven "Blue". "She Looks Good In Red" is 1000x more diverse than anything Remembering Never is doing today, and it has one thing that no later album can claim : Every song on here sounds different. There's plenty of chaotic fury as seen with the 30 second opener "To The Girl I Loved For an Hour." "The Moment You've Realized You're Nothing To Anyone" is probably the closest thing to the band's current sound. The album closer "Last Night Alone" is an odd mix of distorted vocals and clean guitar strumming, and yet it works well. "A Clearer Sky" and "Alison's Song" are definitely the standout heavy tracks. Pete shows off an excellent range of outlandish screams, clever melody and even some spoken word. He's never given a better performance on an RN record. The rest of the band is aptly suited weave in and out of punishment with him, whether it be through ragged, chugging power chords or subdued clean moments. Nothing sounds forced or out of place; everything here flows perfectly. Beginning to end.

While I still enjoy the music RN is making, almost any older fan will tell you this is the best record the band has released. There's a range and diversity on this record that is unparalleled by any of their later work. If you enjoy the older melodic hardcore sound (let's face it, any bands trying to sound like this today just can't and often come off looking pretty horrible), that was gaining popularity throughout 2000-2002, then this record and the ones I mentioned above are musts. The whole genre really peaked in 2003, and now most of the innovative and better bands have either ditched the scene all together or broken up. "She Looks So Good In Red" may have been one of the best records of its time. Seeing as how this quickly become the most imitated form of music in the industry though, I can't say I blame RN much for ditching it. Still as someone who was quite fond of this style of music, this record will please you every time.

shimmlez dimmlez fimmlez
5.0 out of 5 stars OOOOOO NO FOO! Some owning metalcore right here!
Reviewed in the United States on October 26, 2003
These guys remind me a lot of Poison The Well, but I like these guys more, they are darker and more homicidal. Again, with a lot of metalcore albums, this is very technical and features a lot of tempo changes and thats a good thing, a very good thing. They can be going in a pretty fast tempo and then bring it down to an acoustic part with pretty much no warning at all, download the song heartless to see what I mean. This is an incredible album and if you like Poison The Well, then you need to get this.
Read more
2 people found this helpful
Helpful
Comment Report abuse

Amazon Customer
5.0 out of 5 stars Melodic Hardcore at its best...
Reviewed in the United States on November 26, 2002
An amazing cd from an even more amazing band. I have been a fan of Remembering Never since there first release (suffocates my words to you). I listened to that cd non-stop for the longest time, and its gotten me past alot of hard times. Then the new cd came out and it totally spoke to me. Well, I cant say its better than the first release(but im sure others disagree), it is one of my favorite cds. And then i finally saw them alittle while ago, and i have to say they top any other band i have ever seen. I cant wait to see them again. If ur a fan or melodic hardcore, emo, or even metal, give Remembering Never a look. Also check out Until The End, Mean Pete's (vocalist) other band. Thanx and Enjoy
Read more
2 people found this helpful
Helpful
Comment Report abuse

Chris
1.0 out of 5 stars yuck
Reviewed in the United States on November 22, 2004
this kind of stuff is super-hip nowadays. it seems the more breakdowns a band can cram into a song, the more the kiddies will love it. i, for one, think it's a joke. this is not what bands like red roses for a blue lady and poison the well were thinking of when they married nu-emo with metal and hardcore. this all just comes out sounding like really bad nu-metal, except the kids are WAY more concerned with fashion. hopefully this whole terrible trend goes the way they all do, and soon. watch out dudes, your 15 minutes is up right about now.
Read more
4 people found this helpful
Helpful
Comment Report abuse

Ash
5.0 out of 5 stars What's With All The Controversy??????
Reviewed in the United States on January 13, 2005
This cd should deserve at least 4 1/2 stars. There's nothing wrong with it, it's just excellent metalcore. I admit it does lack some diversity, but whenever someone creates a new genre, everyone hates it, so how would you be able to expand your horizons?
Read more
Helpful
Comment Report abuse
See all reviews