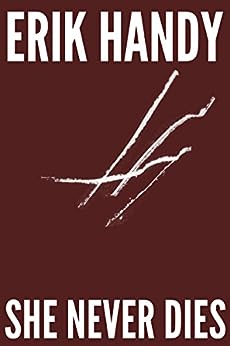 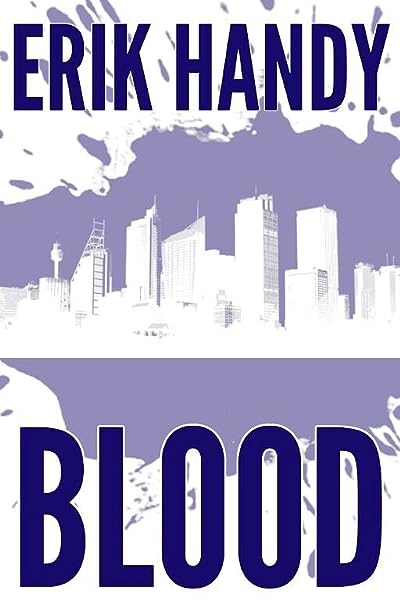 "She Never Dies solidifies Handy's claim of being the New King of Horror." - ScaryReads

"If you love Asian Horror, then you'll love She Never Dies!" - Pod Crawlers

Erik Handy grew up on a steady diet of professional wrestling, bad horror movies that went straight to video, and comic books. There were also a lot of video games thrown in the mix. He currently absorbs silence and fish tacos. In his spare time, he works a full-time job he hates. Buy his books. Spread the word. Thanks.

M. SEBOURN
4.0 out of 5 stars An effective nod toward a number of classic horror tales
Reviewed in the United States on October 10, 2018
Verified Purchase
She Never Dies by Erik Handy is a fast-paced horror novelette about a malevolent spirit that haunts a stretch of interstate highway. Our main characters are a group of college students and a detective who’s investigating a fatal accident involving one of these students.

The good? Handy is a solid writer. This is not a book full of typos, clunky sentences, inconsistencies, and plot holes. It is professionally written, edited, and presented. Also, while the premise of the story—creepy ghost girl who haunts a highway—sounds like something that’s been done many times before, I thought the evil here was well done and unpredictable. Handy tips his cap to a number of horror staples in this tale: classic hauntings, demonic possessions, slashers… it’s all here (which is also, potentially, a bad thing—see below), and none of it reeks of cliche.

The bad? All of my misgivings about this story relate to its length. There simply isn’t a lot of meat on this story’s bones. The characters are simply... well... characters, with thin or nonexistent backgrounds. Same with the antagonist: the cursed young lady was incredibly evil, but we simply don’t know much about her. Her evil occasionally seems hollow, since we don’t really know why—why anything. Lastly, as I mentioned above, there’s almost too much going on here. Haunted highways, cursed teens, assault victims, demonic possessions, insane asylums, unsuspecting detectives… The weight of it all nearly collapses the lightweight word count holding it up.

But it doesn’t. While so much more could have been said (and I do think a few thousand more words to flesh some things out could have elevated this to a five star story), Handy chose to err on the side of leaving us wanting more instead of testing of our patience. And this is an effective story. It’s a breeze to get through, and several of its images will linger with you after you read it.
Read more
One person found this helpful
Helpful
Report abuse

Mac Diesel
5.0 out of 5 stars Erik Handy: The New King of Horror!!!
Reviewed in the United States on March 3, 2018
Verified Purchase
This book was even better than HELL OF THE DEAD (and I loved that one as well). Erik does an incredible job of painting a vivid picture. He spends time developing characters that you care about.
Read more
2 people found this helpful
Helpful
Report abuse

Karen Massari
3.0 out of 5 stars Strained. Talented, but strained.
Reviewed in the United States on September 3, 2012
This book contains a short story about a vile, unforgiving ghost named Rose Miller. A bonus story called Demonica, and various excerpts and scenes. Demonica is about a very evil haunted house. There is a lot of horror and action in all the author gives his readers. At times, though, reading through is like doing homework. There is no balance, no contrast, no redeeming good. There is only rottenness and horror and death. I would have much preferred the first short story fleshed out and written with more love and passion.
Read more
3 people found this helpful
Helpful
Report abuse

Dean Anderson
5.0 out of 5 stars Buy A Copy Today!
Reviewed in the United States on March 5, 2018
Verified Purchase
Forget those pills.
Forget those pumps.
She Never Dies is THE best Male Enhancement Product on the market today.
Read more
2 people found this helpful
Helpful
Report abuse
See all reviews

Philip
3.0 out of 5 stars Ghost story
Reviewed in the United Kingdom on April 26, 2018
Verified Purchase
Decent story, that I'd probably enjoy a lot more if it was fleshed out and had a bit more character development.

A J Ravenhearst
4.0 out of 5 stars Solid ghost story with a great punch at the end
Reviewed in Australia on March 10, 2018
Verified Purchase
The “Interstate Four ghost” is the typical stuff of urban legend: a half-remembered ancient crime, sightings of a ghostly woman on the side of the highway. What else is a bunch of college kids to do, but check it out?

While “She Never Dies” nods to modern Japanese ghost stories, like “The Ring” and “The Grudge”, to me the book was most reminiscent - in style and content - of early Dean Koontz horror-thrillers. As an Australian, I also picked up on the homages to obscure Oz schlocky-horror, “Patrick”.

My major criticism of this story is that early character development is a little thin: for the first few chapters, many of the characters were just names who struggled to stand out from each other. Once the plot settles down to its core characters, though, and the action gets ripping, the story chugs along at a ripping pace.

The ending is a good, unexpected shocker.
Read more
Report abuse
See all reviews
Back to top
Get to Know Us
Make Money with Us
Amazon Payment Products
Let Us Help You
EnglishChoose a language for shopping. United StatesChoose a country/region for shopping.
© 1996-2021, Amazon.com, Inc. or its affiliates