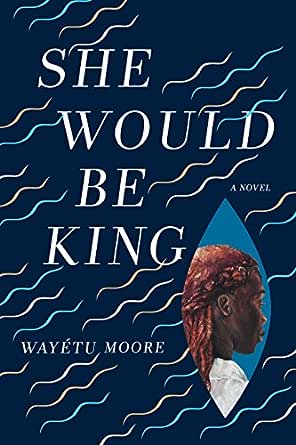 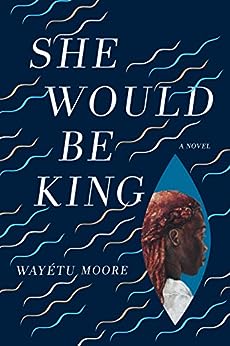 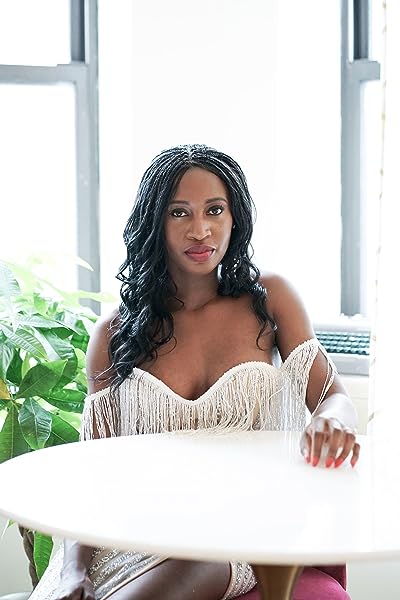 She Would Be King: A Novel Kindle Edition

Wayétu Moore is the founder of One Moore Book and is a graduate of Howard University, Columbia University, and the University of Southern California. She teaches at the City University of New York’s John Jay College and lives in Brooklyn. --This text refers to an alternate kindle_edition edition.

“Moore skillfully reconsiders the idealism of the early African-American settlers through their interactions with the indigenous peoples and braids together intimate story lines centered around universal themes: falling in love, defying familial expectations and the difficulties of doing the right thing.”―The New York Times

“[A] bold de´but. . . . The force and the symbolism of myth pervade Moore’s engrossing tale.”―The New Yorker

“Reading Wayétu Moore’s debut novel, She Would Be King, feels a lot like watching a superb athlete’s performance. . . . Moore makes deft use of magical realism, and her plot and its details are compelling. . . . Like her remarkable protagonist Gbessa, the author has tapped into her own backstory–and emerged with literary superpowers.”―TIME

“This compelling debut novel by Wayétu Moore blends historical fiction with magical realism in an exhilarating tale of the formation of Liberia. Moore effortlessly weaves the threads of indigenous West African tribes, American and Caribbean slavery, and British colonialism together to tell the creation story of a new nation, complete with unforgettable characters and a dynamic voice.”―Marie Claire

“Hotly anticipated. . . . A breathtaking retelling of the founding of Liberia. . . . Wayétu Moore’s magical realism can make anyone believe in how connected humans are to the world around them.”―Glamour

“Fans of Gabriel Garcia Marquez will be intrigued by this debut novel, a reimagining of Liberia’s infancy in the 19th century.”―Harper’s Bazaar

“In She Would Be King, debut novelist Wayétu Moore reimagines Liberia’s past, building a world so clear and evocative you would swear you were in it.”―BuzzFeed

“Moore’s debut unflinchingly depicts the convergence of brutal forces―colonialism, the slave trade―while brushing it with a glimmer of magic.”―HuffPost

“Moore veers from fantasy to lush descriptions and sharp characterization, shedding light on the fleeting moment when the vast African diaspora reversed itself.”―Vulture

“Stunning. . . . It is an epic narrative, weaving together themes of diasporic conflict, the legacy of bondage, isolation, and community, and it offers a transcendent, important look at the ways in which the past is never fully behind us, and instead echoes throughout everything we do.”―NYLON

“This dynamic novel leaves you both satisfied and full of anticipation for what’s to come, in fiction and in reality.”―The Rumpus

“Women everywhere will find themselves admiring the powerful Gbessa in She Would Be King.”―PopSugar

“Composed and compelling, brimming with devastating truths and sparkling with ferocity, this is a masterpiece of a debut.”―BookReporter.com

“The dialog is fluid and poetic, allowing readers to imagine the events, sights, smells, feelings, and sensations. As with Yaa Gyasi’s Homegoing, this work will appeal to lovers of African, African American, and literary fiction.”―Library Journal, starred review

“An ambitious, genre-hopping, continent-spanning novel. . . . Moore is a brisk and skilled storyteller who weaves her protagonists' disparate stories together with aplomb yet is also able to render her sprawling cast of characters in ways that feel psychologically compelling. In addition, the novel's various settings―Virginia, Jamaica, and West Africa―are depicted so lushly that readers will find themselves enchanted.”―Kirkus Reviews

4.2 out of 5 stars
4.2 out of 5
63 customer ratings
How does Amazon calculate star ratings?
Amazon calculates a product’s star ratings based on a machine learned model instead of a raw data average. The model takes into account factors including the age of a rating, whether the ratings are from verified purchasers, and factors that establish reviewer trustworthiness.

J-Phi
4.0 out of 5 stars Loved it!
Reviewed in the United States on September 25, 2018
Verified Purchase
This debut novel by Wayétu Moore is not at all in what I would call my preferred genre. I’m not particularly into fantasy or adventure or historical fiction. That said when Amazon recommended this to me when it was released, something about it grabbed my attention and I had to give it a read. Good decision making on my part because I absolutely loved this novel.

The novel is in two “books” or two parts if you will. The first (titled “The Three”) is a sort of background coming of age story for the three main characters, Gbessa, June Dey, and Norman Aragon. It’s tragic but these are superhero kids so it’s also fun and no hardship to read. The second part of the novel (titled “She Would Be King” focused more on the history of Liberia and the repatriation of slaves and the attack on indigenous culture and beliefs. I had assumed that Gbessa was the title character but I felt like she (understandably) became diminished for much of this second part of the novel so that her re-emergence near the end seems a little like “see what love made her do,” which I suppose is more realistic than her being moved by people who were inhuman to her.

For the most part, this reads like a character-driven adventure story set in Liberia’s actual history of becoming a nation. The author makes this story so engaging that afterwards, you’ll want to go study some Liberian history to find out if life (Gbessa), resilience (June Dey) and unseen powers (Norman) prevailed in the end. I personally preferred Book 1 to Book 2 because in my opinion, Book 2 dwelt a lot on building the world of resettled Liberia then in the end rushing over what I felt should have been the real meat of the story i.e. the why and how of the “SHE being king.” I feel like a lot had been building with the three compelling characters throughout the novel and in the end, that potential wasn’t explored and they were sort of just written a rushed (and less creative than the rest of the novel) conclusion. That’s why I’m giving this novel 4 stars out of 5, but this is still an excellent read that I highly recommend.

Elizabeth Sommers
5.0 out of 5 stars Spirit celebrated
Reviewed in the United States on July 7, 2019
Verified Purchase
Wayetu Moore's expansive book spans the Middle Passage of enslaved Africans through the time of the founding of Monrovia and Liberia.
Through magical realism she describes the resiliency and strength of will that was required for survival.
Although the cruelty of slavers and those who "owned" enslaved individuals is deep and pervasive, the human spirit and will to survive are affirmed.
Read more
3 people found this helpful
Helpful
Comment Report abuse

Chester Hopkins
1.0 out of 5 stars Historically interesting.
Reviewed in the United States on December 25, 2018
Verified Purchase
Concept was interesting but the grammatical switch between singular, plural, and inconsistent use of dialect really distracted me. Sorry. Of course, I read it all and would always give cudos to any author that completes and publishes their work!
Read more
4 people found this helpful
Helpful
Comment Report abuse

Bulls Run
3.0 out of 5 stars Strong Woman?
Reviewed in the United States on January 10, 2019
Verified Purchase
I thought the book had a strong beginning, it was interesting the way the stories built up around the various characters. But their interactions for the most part were brief and not fully developed, and to me the story petered oit ar the end. It was not at all an epochal ending.
Read more
5 people found this helpful
Helpful
Comment Report abuse

DF New Canaan
5.0 out of 5 stars Beautifully written
Reviewed in the United States on October 13, 2018
Verified Purchase
Compelling story line that keeps you turning pages, while at the same time the language itself is exquisite. Reminiscent of Toni Morrison, less in the actual style than in the general sense of beauty and of being uplifted by the reading experience.
Read more
4 people found this helpful
Helpful
Comment Report abuse

emily White
4.0 out of 5 stars Interesting, but lost steam
Reviewed in the United States on September 3, 2019
Verified Purchase
The story was great! It was super interesting to hear it from all these different perspectives and to have the characters work together for a change their worlds. But the ending fell flat in my opinion; with the depth of the writing and plot and ethos throughout the book I expected more than a pseudo-last stand.
Read more
One person found this helpful
Helpful
Comment Report abuse

Kindle Customer
5.0 out of 5 stars A Must-Read
Reviewed in the United States on September 16, 2018
Verified Purchase
An incredible book. It's one of my all-time favorites.
Read more
6 people found this helpful
Helpful
Comment Report abuse

Arlene A.
5.0 out of 5 stars Wow!
Reviewed in the United States on November 5, 2018
Verified Purchase
I wasn’t sure what to expect when I picked up this book, but I’m very glad that I did. I thought the story of Libera and how it came into existence was sooo good and I loved all the characters in this debut novel by Ms. Moore.
Read more

Bredon House
2.0 out of 5 stars Okayish but peters out rapidly
Reviewed in the United Kingdom on July 15, 2019
Verified Purchase
At first I enjoyed the book but it seemed to rush to the end and just petered out leaving an unsatisfactory taste. Not a book I'd re-read or recommend to anyone. It'll be going straight to the the charity shop the next time I'm passing.
Read more
One person found this helpful
Helpful
Sending feedback...
Thank you for your feedback.
Sorry, we failed to record your vote. Please try again
Report abuse

reader
5.0 out of 5 stars perfect characters
Reviewed in Germany on February 16, 2020
Verified Purchase
Wonderful command of language and a diverse cast of characters from very different backgrounds. The novel explores the difficulty of finding common ground in forming a nation for the African disapora, when at the same time, the expierences binding former slaves toghether are not shared by the peoples already living on the land.