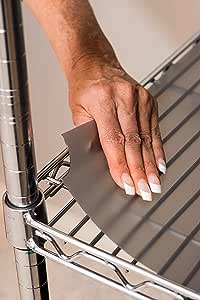 Sterling Shelf Liners set the standard in the industry. Our Wire Shelf Liner is crafted to provide unparalleled quality, longevity, function and beauty. The Wire shelf liner instantly gives your wire shelf all the benefits of a flat surface. Our liners are waterproof, easily wipeable, and have been custom tailored to fit perfectly around the wire shelf poles. Sterling’s choice of beautiful and fun transparent colors allow you to add a pop of color to your life.

4.8 out of 5 stars
4.8 out of 5
3,990 global ratings
How are ratings calculated?
To calculate the overall star rating and percentage breakdown by star, we don’t use a simple average. Instead, our system considers things like how recent a review is and if the reviewer bought the item on Amazon. It also analyzes reviews to verify trustworthiness.

amazon_princessTop Contributor: Cooking
2.0 out of 5 stars At 0.65mm, thinner than I had expected
Reviewed in the United States on June 4, 2018
Size: (18-Inch-by-48-Inch)Color: GraphiteVerified Purchase
As far as I can tell, "gauge" is not a universal standard of measure, but has different meanings depending on the material. 30-gauge sheet metal would be about 0.3mm. For plastic sheets (like trash bags), 30 gauge would be 7.6 microns (thousandths of a millimeter). I could not find any standard for polypropylene sheets.

So it wasn't clear to me what the advertised thickness of "30 gauge polypropylene" was actually going to be. In the photo the reflection on the edge of the sheet made it appear to roughly 1/16th of an inch (about 1.5mm). We have acrylic boards for wire shelves that are much thicker than that but they were expensive so I figured around 1.5mm was a reasonable expectation for flexible shelf liners.

In fact these measure 0.65mm, or 1/32nd of an inch. Thicker than 30-gauge metal but thinner than I expected. They can not support any weight at the edges and flex somewhat in between the shelf wires.

On the plus side they are cut to the correct dimensions.

So they do function as liners for the wire shelves and do prevent small items from falling through. But they are not exactly what I had expected for the price.

In2Sign
4.0 out of 5 stars Just one liner short!!
Reviewed in the United States on October 6, 2017
Verified Purchase
I received my liners and put them in place right away. They fit perfectly. My only wish is that a 5 pack needs to be offered, as both of my shelving units have 5 shelfs.
Read more

Jeff
4.0 out of 5 stars Works. . .but a little loose for my liking
Reviewed in the United States on October 4, 2018
Size: (14-Inch-by-36-Inch)Color: GraphiteVerified Purchase
I ordered these linings for my 14 x 36 x 54 Whitmore Supreme 4 tier wire shelving. Being that the shelving is basically wire racking, I figured it would be a good idea to have a liner of some sort. Unless one plans on putting only boxes and/or other flat bottomed items onto the shelves--which I didn't plan on to--liners such as these are pretty much a prerequisite; otherwise, stuff can fall through the cracks and be a nuisance.

The liners are made out of #5 Polypropylene plastic, which is the same plastic most margarine and yogurt tubs are made of, so it is relatively safe, non toxic, and doesn't radiate that horrendous off-gassing stench which is typical of some plastics, such as #3 Polyvinyl Chloride (PVC) plastic, for example. One reviewer said he noticed a "small offensive smell," but for me, a guy who is extremely sensitive to smells and chemicals, there wasn't much of anything, which I was relieved about.

I do have one complaint, though:
The liners do fit for most part, but they are a looser in length than I would like them to be. The width is fine, almost perfect, but with the length, the liners are a good half inch short, thus causes some shifting left and right. The more a liner can shift about, the more likely it is to slip off. I attached some photos for you to see. . .

Overall, these do the job. They don't stink (at least not to me), are relatively non toxic and should endure for awhile. But being that they are a little on the shorter side in length for my wire shelving, I am a little disappointed and thus can only give four stars.
Read more

VedaBanks
5.0 out of 5 stars A must have! Great looking liner!!!!
Reviewed in the United States on February 23, 2019
Size: (18-Inch-by-36-Inch)Color: GraphiteVerified Purchase
I especially appreciate the packaging. Many reviews say the were bent and wouldn’t lay flat. Mine arrived flat in a box appropriate to prevent folding or bending. A+

The fit the shelves I got from Target perfectly. I only wish that they came in a pack of 5 vs. 4 since most shelving units (including those on Amazon) have 5 shelves. A+

These liners give my shelves a cleaner look vs. not having them at all in my laundry room. I also have silver shelves that these gray liners would look great on. A+

The material is flexible yet easy to clean. One side is super smooth while the other is smooth with a slight groovy surface (you can use either side face up). I even zip tied a hanging basket on two shelves and the surface is still smooth with no ripples (see pic). My only issue is, the material is sturdy but not indestructible. Meaning, if it bends too much or if you place/drop an extremely heavy item it may break/crack; I had a liner on the bottom shelf with 2 cases of water stacked and decided to remove shelf liner as to not be angry later should it break. Other than that, I recommend theses shelf liners. B-
Read more

RKL
5.0 out of 5 stars Most refined looking wire shelving liners available
Reviewed in the United States on December 20, 2018
Size: (14-Inch-by-36-Inch)Color: GraphiteVerified Purchase
I started with your basic liner sold by the discount wire shelf sellers. They work, but were usually a slippery shiny type of plastic and usually will only fit the particular shelves (though same dimensions, shelves tend to differ slightly in spacing between the posts, which is why mixing brands in one set of posts often doesn’t work.). Then I found some here on Amazon that were slightly nicer finish, but annoyingly, were a bit too big and came rolled up in a tube, needing to be flattened.

Finally, I found the Sterling ones here. Nice matte finish. Even nicer is the rounded cutouts of the posts. Much more polished looking than a basic diagonal cut.

But not quite perfect. They are cut a bit smaller so they fit every brand of shelves I’ve tried in a size, but slide around a bit. Also, not every size is available. I.e. no 21” deep option. So if you want matched liners and have a mix of shelving, you’re out of luck.

Fortunately, I only use liners for the shelves I use to hold books and all those are 14” deep. For that, these look the nicest, despite sliding around slightly. It turns a utilitarian looking shelf into something respectable looking within a loft-type motif.

I’ve bought 3 sets in 2 sizes. Now, if only I can order these custom cut to size, I would line the non-book shelves too!
Read more
39 people found this helpful
Helpful
Comment Report abuse

irishczech
5.0 out of 5 stars Must have for wire shelves
Reviewed in the United States on January 26, 2017
Size: (18-Inch-by-48-Inch)Color: ClearVerified Purchase
I had purchased two wire shelves to keep my stand mixer, microwave, toaster oven, & air fryer; rather than take up counter space. But the little feet on each appliance was falling through and making the items unstable. These liners kept them on a flat surface & kept them working properly.
Read more
57 people found this helpful
Helpful
Comment Report abuse
See all reviews