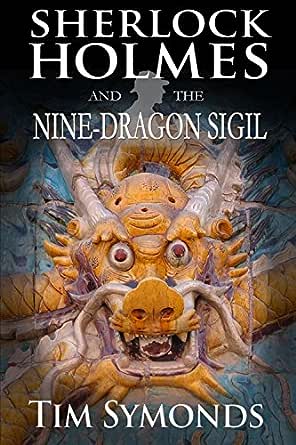 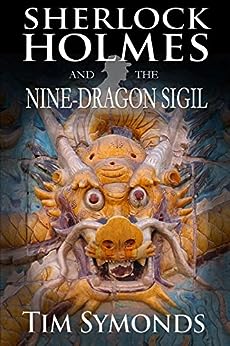 Other detective novels by the author include -

Website tim-symonds.co.uk/ --This text refers to the paperback edition.

I spent several months reading everything I could on the final dramatic years of the Great Ch'ing. It tottered Hamlet-like to its grisly end. I learnt at least two things from all the research - first, that the Empress Dowager Cixi was one of the most remarkable rulers ever to command a vast nation and deserves a much better press than history so far has accorded her, and secondly, if you ever come across a Time Machine, don't even think about landing in The Forbidden City in 1907 when Holmes and Watson find themselves in that fabled but dangerously unpredictable Alice-In-Wonderland city. Instead I recommend Time Travllers to visit the peaceful English countryside of Sussex where I sited my first novel, 'Sherlock Holmes And The Dead Boer At Scotney Castle', set in 'Bateman's, the house owned by Rudyard Kipling. --This text refers to the paperback edition.

Like all my plots, Sherlock Holmes And The Nine-Dragon Sigil takes place in the halcyon days when Edward V11 of Saxe-Coburg and Gotha was on the throne of England, the king-emperor for whom the Era was named, a time when yellow fogs drifted eerily along London's half-lit streets, agile Hansom cabs with Holmes and Watson bumping around inside rattled away to heaven-knows-where, a 'leisurely time when women wore picture hats and did not vote, when the rich were not ashamed to live conspicuously, and the sun never set on the British flag'. Edwardian summers were reputed to be unusually warm though the Meteorological Office tells me this was not true.

By the time Edward came to the throne in 1901, Holmes and Watson had spent the best part of two decades together, solving knotty cases which baffled the best of Scotland Yard's detectives. The great Consulting Detective's use of observation, deductive reasoning and scientific knowledge fascinated young and old, rich and poor, New York illuminatus or London East Ender alike.

It was a period when Holmes and Watson reached their height in experience and maturity, men of the world in step with the immense British Empire. Even Watson's confidence was burgeoning despite Holmes's occasional biting put-downs.  The real-life Criminologist Ashton-Wolfe later recorded in The Illustrated London News that many methods
invented by Sherlock Holmes became commonplace in police practices. The quick arrival at the scene, the examination of the lock and key, the bed, the chairs, the carpet, the mantelpiece, the body and the rope. --This text refers to the paperback edition.
Read more

Mr. Richard Lw Bunning
5.0 out of 5 stars The Familiar Sigil of the Briar Pipe Blows Smoke from Chinese Dragons
Reviewed in the United States on February 18, 2017
Verified Purchase
Firstly, I’m not a raving fan of the fictitious Sherlock Holmes, though I’m certainly an admirer of Sir Arthur Conan Doyle. I read several Sherlock books in my younger years enjoying their adventure and appreciated their cleverly weaved plots, even if it was other works of Doyle that really grabbed me. Professor Challenger, who first appeared in ‘The Lost World’ has always been my favourite character. So a weak amateur fan of the original books though I am, I couldn’t but enjoy how genuine this read felt. I could have easily been fooled into thinking that this was the writing of the great man himself, even though this is as much historical fiction as the team once of Baker Street. Further, once embroiled in unmasking the sinister, even the plot was worthy of the Sherlock Holmes stamp.
This book is not only brilliantly written, it is exceedingly well researched. I enjoyed the detail in the history every bit as much as the story itself. The historical fiction is as clever as the stylistically accurate incorporation of by far the two most famous characters of Doyle’s huge imagination—two characters as famous as any in literary fiction.
I very much enjoyed the ‘glossary’ at the end of the book, which gave depth to so much of the period detail. This additional information doesn’t add to, or subtract from, the story itself, but certainly gives readers such as I, ignorant of Chinese history, a much needed and speedy education. All the detail is self-explanatory enough in the run of the story, however, the additional information rounds off this reading experience quite delightfully.
I recommend this book to fans of Sherlock Holmes, lovers of historical fiction and to all those that like a wide variety of well-written fiction. I will be looking to read further books from Tim Symonds’ pen.
Read more
One person found this helpful
Helpful
Report abuse

Amazon Customer
5.0 out of 5 stars Loving this Sherlock!
Reviewed in the United States on November 17, 2016
Verified Purchase
I received a free pre-release copy of this book from the author, but after reading it I just had to buy a permanent copy to add to my Sherlock Holmes collection! If you're a Sherlock Holmes fan and you haven't read anything by Tim Symonds YOU ARE MISSING OUT!!
Like many Sherlock Holmes stories, you get an introduction to the narrative of Dr. Watson and the setting. It's a calm, steady, necessary expedition that benefits the complicated mysteries of this Sherlock novel well.
From this you learn Sherlock and Watson no longer live together for the consulting detective has settled down in quiet Sussex. Personally, I love the retired Sherlock stories because they prove that no matter how old the great detective Holmes and his trusty Dr. Watson get, they're always going to be the most incredible team in fictitious history!
Tim Symonds is not humble about this fact, which I love.
This author has done some of the most authentic Sherlock Holmes writing I have ever read! And believe me, I have read a LOT of Sherlock Holmes in my time!
I don't know if this author has ever been to China or not, but I sure feel like I have after reading this! What's even better is I feel like I've fallen into a worm hole and gotten popped out in 1900's-China! The text used to describe this fascinating setting is as busy as it is disorienting, no doubt making it all that much more realistic for the time, place, and scenario.
The author has clearly mastered the art of foreshadowing because, even though I had to have Sherlock point it out to me, all of the evidence and bits of information relevant to the story are written RIGHT THERE!! I love being tricked just as much as I love being guided in the right direction and Tim Symonds has managed to do both. Amazing piece of literature! I would love to see this converted at some point to hit the big screen. I can picture Basil Rathbone and Nigel Bruce playing these roles and even though that's no longer possible, I would have a field day seeing the old fashion Holmes and Watson back on screen by some fresh writing and faces!
Read more
Helpful
Report abuse

Raven
VINE VOICE
3.0 out of 5 stars Just couldn't get into this one...
Reviewed in the United States on August 30, 2017
Doctor Watson called to China!

My thanks go out to Steve and Timi at MX Publishing for my copy of this book.

Tim Symonds writes about a specific time in the history of Sherlock Holmes and Doctor Watson. All of his novels take place after Holmes has retired to keep bees and Watson is still seeing a few patients. Most of the time I have found these books to be extremely interesting. This one has been an exception to the rule…

Doctor Watson is given orders to go to China to help set up medical teams with China’s army. His contact is General Yuàn. Watson has to go overland to China and there is no way to really protect him along the way. Except that Holmes is also involved…

I just couldn’t get into this one. I have tried and failed to finish the book on at least six occasions. I will read maybe twenty pages and then sigh and put the book down. It makes no sense to me because I know that Tim is a great writer. I have had the pleasure of reading several of his books and enjoyed them very much.

I will give the book three stars based on Tim Symonds’ usual writing ability. I cannot give any more stars because I just cannot get into this book. Sorry, Tim, what can I say?

Ylo Korgemagi
3.0 out of 5 stars Interesting blend of fiction and accurate history.
Reviewed in Canada on November 23, 2019
Verified Purchase
A good yarn, but I am spoiled. I like my Sherlock Holmes in a short story format.
Read more
Report abuse
See all reviews