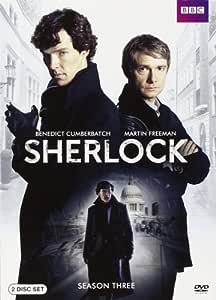 The question on everyone’s lips is finally answered as the hugely popular Sherlock returns in three brand new action-packed adventures. With the demise of Moriarty, Sherlock finds himself locked in another mind battle with the powerful Charles Augustus Magnussen, who is holding the secrets of the world at his fingertips. Once again, the game is on for Sherlock and John in “The Empty Hearse,” “The Sign of Three” and finally, “His Last Vow.”

4.8 out of 5 stars
4.8 out of 5
4,827 global ratings
How are ratings calculated?
To calculate the overall star rating and percentage breakdown by star, we don’t use a simple average. Instead, our system considers things like how recent a review is and if the reviewer bought the item on Amazon. It also analyzes reviews to verify trustworthiness.
Top reviews

ShopperGrrl
4.0 out of 5 stars Writing Not Up To Par Wirh The Acting
Reviewed in the United States on January 18, 2019
Verified Purchase
I've just watched all three seasons (and not planning to buy #4).

Stellar actors in Freeman, Cumberbatch and the supporting cast. I particularly like this Lestrade...a man who puts duty before ego, and has the *amazing* maturity to suffer the demeaning treatment of Holmes, and still understand, and forgive, the damaged though brilliant person he is. Kudos too, to an unusual "Mary Watson", fully equal to the two men in her life. Molly began one dimensional but expanded into her own tragic arc...she was a woman to respect, as Sherlock too came to see. The two chief villians are short on believability but long on creepiness; stellar acting again, though. Mycroft, too, was an excellent rendition.

Plot believability suffered in a number of episodes... in the "Hound", the actors suddenly recovered from their delusion-inducing gassing, to make immediate speeches!

Sadly, the writers were determined to make Sherlock a martyr for a love he couldn't obtain, and give the whole series a miserable spin. The one-sided homoerotic subtext was pretty heartbreaking. In the bachelor pub spree, a drunk Watson puts his hand on Sherlock's knee, to which Sherlock replies "Go ahead, I don't mind." (I don't think Watsion is gay; he is rather a man with a need he must somehow express in acceptable terms in society...not homosexuality, but a need for violence, thrills, adrenalin, danger. Sherlock thus is Watson's "fix").

But I did read this Sherlock as closet homoerotic. Or at least deeply lonely. He however remains strangulated and unable to express emotions except in a "double blind" pretence ("I'm saying this but it's a jest or a ruse [and that's the only way I can say it]" when, of course, it is not jest or ruse, but deeply felt).

Thus this is a damaged, ultimately sad, broken Sherlock, in my opinion. For all his childish rudeness, I felt sorry for this lonely, flawed character.

This Sherlock adopted his Watson as one would a dog. He thought he needed someone to admire and love him. He wanted love and praise from the dog, to ease his innate insecurity and loneliness. But as anyone who has ever adopted a dog knows, we may *think* that, when we take on the tail-wagging dog, but in the end, we realise *we* needed to love, even more than *be* loved, as we had assumed. So Sherlock martyrs himself for the unrequited love he feels for his Watson.

A sad, but fascinating, series.

Amazon Customer
5.0 out of 5 stars Gotta love a good Sherlock and Watson
Reviewed in the United States on April 23, 2016
Verified Purchase
Best Sherlock ever, with my favorite episodes on it...the wedding and the return after Sherlock's dive off the building at the beginning of the last season. Other reviewers said this was the version to have, as the unedited BBC version. Maybe, I don't know, I only watched it on Netflix. I will be getting the first two seasons too and watching carefully for anything further. The scripts are awesome and fresh, the pacing and camera work great and intersting, and the casting superb. Not gorey but enough chase scenes and action to suit anybody. LOvE It.

I love mysteries and Sherlock Holmes, who doesn't!! THIS IS BY FAR the best interpretation of a modern Sherlock and Watson, love Mary Watson too.
Read more
10 people found this helpful
Helpful
Report abuse

dbTop Contributor: Pets
5.0 out of 5 stars Wonderful Sherlock, not exactly Holmes
Reviewed in the United States on October 7, 2016
Verified Purchase
First I decided Jeremy Brett was the best Sherlock Holmes on the screen, then Johnny Lee Miller, then Benedict Cumberbatch, but now I think it's Jeremy Brett for the first season, before he put too much Brett into the character. There's nothing wrong with Cumberbatch's interpretation - well, there is: he's just not fastidious enough for my taste. Holmes of the penny dreadful stories is nothing if not fastidious. I see him on the floor, examining a clue no one else can even see, then when he stands up, he's still clean, as if he had just stepped out of the entrance to 221B. He is never called Sherlock, his name is "Holmes." But Cumberbatch revels in the behaviors that make one dirty. He may be Sherlock, but he is not Holmes.
Martin Freeman's Watson, however, is far and away the best Watson I have ever seen, better that I could have imagined after at least a dozen bumbling, moronic Watsons we seem to have been gifted with over the years. Freeman's Watson is courageous,, intelligent, but injured by the horrors of war, and with the need for action that life with Holmes offers. Absolutely the best, a match for Sherlock in every way except Watson has a moral compass that Sherlock seems to lack.
To say Cumberbatch's Sherlock was not my favorite Holmes is not to say that I didn't thoroughly enjoy every minute of every episode in three seasons of the show, I was completely involved, entangled, addicted to the show. And while I was watching, I thought Cumberbatch had the character down pat, but in retrospect I can't say he was "better", just new and different, and unfortunately, like a child who doesn't mind getting muddy as he splashes through the puddles after a rain.
So... An excellent re-interpretation of the iconic detective Sherlock Holmes, excellent in all aspects save one, and Benedict Cumberbbatch is an excellent, award worthy actor who's immersion in the character of Sherlock the hyper-intelligent man, stuck developmentally at twelve years old, who's exuberant pursuit of accurate explanations of reality lead to wonderful stories for us to watch unfold. I will watch them again, and possibly again, and enjoy every minute. You should too.
Read more
16 people found this helpful
Helpful
Report abuse
See all reviews

Elleppi
5.0 out of 5 stars Sherlock on Sherlock, friends and his double
Reviewed in the United Kingdom on April 29, 2014
Verified Purchase
This 3rd series of Sherlock starts in a very unusual and unexpected way: it doesn't seem to be focused on a case to solve, because the case becomes, more and more, focused on characters relationships.
But don't worry: there'll be mysteries and murders and menace (personal and collective). And witty dialogues, brilliant scenes, fantastic twists.
With some more room for characters (not that they lacked of definition in the previous series) like we got to a point that we (and they) all need to take stock of the situation, before a final, unbelievable twist.
Well, double twist: to solve the case and give the series a new challenge waiting to be taken in season 4.
Visually the blu ray is excellent and the sound design powerfully sticks out.
Read more
3 people found this helpful
Report abuse

Officer.T.Dibble
5.0 out of 5 stars fantastic series 3 of "Sherlock"
Reviewed in the United Kingdom on January 16, 2015
Verified Purchase
This is a brilliant series with great actors. Episode 3 has a fantastic new villain, ie, "Borgen" and "The Killing" star Lars Mikkelsen, who is amazing as master blackmailer Charles Augustus Magnussen. The character really seems to enjoy watching the effect he has on them, which is very chilling to watch. I hope Magnussen is brought back in future series because a Moriarty / Magnussen team would be awesome!
Read more
One person found this helpful
Report abuse

Maria
5.0 out of 5 stars Different packaging
Reviewed in the United Kingdom on July 7, 2017
Verified Purchase
BUT I was a bit surprised when I received the DVD because it was a different one from the one I purchased and for a moment there I thought there was a mistake. It is the special edition all right, it has the three DVDs, but the packaging is a different one.

In any case, I'm rating the series with a 5, since it deserves it, so there you have it :)
Read more

5.0 out of 5 stars Different packaging
Reviewed in the United Kingdom on July 7, 2017
BUT I was a bit surprised when I received the DVD because it was a different one from the one I purchased and for a moment there I thought there was a mistake. It is the special edition all right, it has the three DVDs, but the packaging is a different one.

In any case, I'm rating the series with a 5, since it deserves it, so there you have it :)

Amazon Customer
5.0 out of 5 stars Sherlock.
Reviewed in the United Kingdom on December 14, 2020
Verified Purchase
It's great that the BBC have turned sherlock into the 21century adaptation. Thank you Amazon.
Read more
Report abuse

Rovi Edals
5.0 out of 5 stars Great adventure
Reviewed in the United Kingdom on December 5, 2020
Verified Purchase
Another excellent series from a modern day Sherlock and Watson.
Read more
Report abuse
See all reviews

Page 1 of 1 Start overPage 1 of 1
Previous page
Next page
Pages with related products. See and discover other items: bbc sherlock