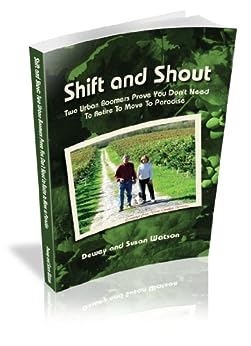 Dewey & Susan Watson have lived in the Bay Area of San Francisco since 1968, mostly in the cities of Oakland, Berkeley and Piedmont. Dewey has written and blogged extensively on various subjects and is presently writing an historical novel about the Russian/Alaskan Native experience in Hawaii. Because they so enjoy West County Sonoma, they felt their story was worth telling. --This text refers to the paperback edition.

Ginny Freeman
4.0 out of 5 stars Zsa Zsa should have read this before moving to Green Acres!
Reviewed in the United States on August 19, 2013
Verified Purchase
Dewey and Susan are brilliant in alternating "his" and "hers" narratives throughout the book, which is important as men and women are apprehensive about different things when contemplating a major move. They even included the perspectives of their pets and the impact of two moves on their dogs and cat.

The visual images were fabulous, and the humorous stories about gardening/farming were priceless. The "faith" and "community" components gave their experiences a depth and complexion that separates story-telling from soul-sharing. Their vivid descriptions had me tasting the fresh tomatoes and smelling the newly-cut Christmas tree. Several of the characters they described seemed like they were right out of Central Casting and I could practically hear them talk and imagine how they were dressed. I could even envision what the people were like that were "not there" when they left money behind in baskets for things like fresh eggs.

The kindness and good manners that are still displayed by the locals was also well-depicted. It was so heartening! I applaud the Watson's and thank them for such a wonderful gift to those of us going through the Shift. I only wish I had thought to make notes in the margins and highlight things I want to do, places I want to go, and resources to keep handy as my husband and I have recently made a move to an area close by. I will just have to read it again, happily!
Read more
Helpful
Report abuse

William Grant
4.0 out of 5 stars Opens Possibilities for Me!
Reviewed in the United States on July 13, 2013
Verified Purchase
Well written, transporting memoir of a Boomer couple's move from Oakland to the wine country. What's the problem, you might ask. But any of us dealing with change -- and who isn't? -- knows the challenges that Dewey and Susan so clearly and charmingly delineate. Their book, part vivid travelogue, part fascinating history of an enchanting area, celebrates the "what's possible," and does it by interweaving the separate voices of a couple who obviously love one another and are moving into the next chapter together. Inspires me to think about what new paradise could be possible for me and my family -- William Laurence Grant  Goddess Betrayed (The Goddess Series) (Volume 1)
Read more
Helpful
Report abuse

mensadventuretravel
4.0 out of 5 stars Paradise Found
Reviewed in the United States on April 2, 2012
Dewey and Susan Watson's "Shift and Shout," is a beautifully written chronicle of their move from the San Francisco Bay Area, north to West County Sonoma. Framed by chapter subheadings that evoke the music of their youth, "Shift and Shout" describes what prompted the Watson's to trade their comfortable home in Oakland, their expansive network of friends, shops and access to San Francisco, for the rolling hills, and country pace of Sonoma. Dewey and Susan's alternating early sections address the doubts, tough decisions and hard work that would discourage most baby boomers. Soon after they settle into a new house, Dewey tries to balance his years of commuting to work with a growing reluctance to leave Sonoma. The Watsons have clearly made a choice and among the chapters, Dewey's wonderfully written history of Sonoma balances Susan's discovery of gardens, vineyards, shops and new friends. Though "Shift and Shout" contains elements of a how to journal, their journey from Oakland to Sonoma and the reward of living there creates an inspiring read. By the final page you can only marvel at the prose and envy their lifestyle.
Read more
One person found this helpful
Helpful
Report abuse

Jef
5.0 out of 5 stars Shift and Shout
Reviewed in the United States on February 8, 2012
This is a very good read for anyone thinking of pulling up roots and planting them elsewhere. It especially gives a rounded view of that process for those on the edge of retirement. Susan and Dewey allow us a look into their inner lives as they struggle with the decision to move from an area that is rich with friends and activities. They take us step by step to the process of acquainting themselves to a new community in all the dimensions required. I highly recommend a delightful tale of an important journey.
Read more
One person found this helpful
Helpful
Report abuse
See all reviews
Back to top
Get to Know Us
Make Money with Us
Amazon Payment Products
Let Us Help You
EnglishChoose a language for shopping. United StatesChoose a country/region for shopping.
© 1996-2021, Amazon.com, Inc. or its affiliates