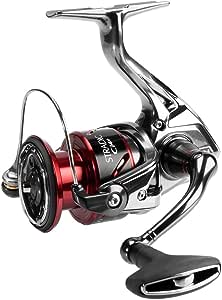 One of the world's most popular high-performance reels gets a significant upgrade. The Shimano Stradic CI4+ FB Spinning Reel incorporates the latest Shimano technology while retaining all the performance features that serious anglers count on. Its super-light, strong CI4+ carbon body and cold-forged aluminum spool are now joined by Shimano's Magnumlite Rotor, which is 25% lighter than previous styles.

Striking good looks, light weight with a solid feel, and an ultra smooth reeling experience combine to win the hearts of anglers around the globe. Incorporating exciting concepts like Hagane gear, G Free Body, CI4+, X-SHIP, Core Protect, and the totally new Magnumlite Rotor which allows a super light feel when you turn the handle, the new Stradic CI4+ is built to last.

Striking good looks, light weight with a solid feel, and an ultra smooth reeling experience combine to win the hearts of anglers around the globe.

4.7 out of 5 stars
4.7 out of 5
834 global ratings
How are ratings calculated?
To calculate the overall star rating and percentage breakdown by star, we don’t use a simple average. Instead, our system considers things like how recent a review is and if the reviewer bought the item on Amazon. It also analyzes reviews to verify trustworthiness.

mike
1.0 out of 5 stars Do not purchase this reel
Reviewed in the United States on July 11, 2019
Verified Purchase
I have been a loyal Shimano customer for decades but I am getting fed up with the garbage they have been making. I received this reel(Stradic CI4+C3000) as a Christmas present from my wife. It was purchased from Amazon and It stayed in the box brand new until April. It had under five hours on it and less than 5 fish when it broke while fighting a little five pound fish(Striped Bass). This is a clear design flaw. I should have learned my lesson when the bail spring blew and bail spring cover broke on my Stella 3000FD and I could not find replacement parts. I think I’m about done with Shimano.
Read more

1.0 out of 5 stars Do not purchase this reel
By mike on July 11, 2019
I have been a loyal Shimano customer for decades but I am getting fed up with the garbage they have been making. I received this reel(Stradic CI4+C3000) as a Christmas present from my wife. It was purchased from Amazon and It stayed in the box brand new until April. It had under five hours on it and less than 5 fish when it broke while fighting a little five pound fish(Striped Bass). This is a clear design flaw. I should have learned my lesson when the bail spring blew and bail spring cover broke on my Stella 3000FD and I could not find replacement parts. I think I’m about done with Shimano.
Images in this review

Cory
1.0 out of 5 stars Out of the box review
Reviewed in the United States on September 18, 2018
Verified Purchase
haven't used it yet. Seems nice I've used the non CI4+ version so I assume this will be just as good if not better. That being said whoever thought it would be good to put a piece of plastic or whatever behind the spool line holder is a complete moron. I've never seen that before and when I tried to take it off it took me about 45 mins and ended up scratching the spool. I have to admit after spending this amount of money I'm a bit disappointed in this design flaw. They didn't have it on the non CI version.

EDIT: Apparently my other c3000 came with this as well but it's much smaller and less noticeable. Still seems ridiculous to me. Overall the rest of the reel is solid so far.

Updated: the cloth washers burned out after less than a year. Would not ever buy this reel again...it's awesome when it works but for the $ I would never buy it again. It's basically not functional after they burn out because you can't put new line on it.

updated 9/18 - My reel sat at the Shimano repair center for a week already. I reached out to them for an update and they said it's not being processed because they don't have a credit card on file. Well, I just lost a week because no one told me. Now my fishing season is over with that reel and and their customer service is absolute crap. By the way, they also expect you to send the reel back every year to them for servicing...what a waste of money.

Update 9/28: Got the reel back and it needed all new drag washers and line roller. So, lesson if you are using it for really tough inshore fishing likes albies, bonito, etc then look elsewhere but for freshwater and stripers I think you are OK. Their customer service is a joke they have 0 understanding of their reels and tried to charge me even though it's under warranty and a clear manufacturing issue. Lesson...don't use cloth drag washers or just replace them with carbon.

Matt
1.0 out of 5 stars Total scam. Don’t buy!
Reviewed in the United States on August 27, 2019
Verified Purchase
This is a scam. I purchased this reel and when it broke I sent it to Shimano for warranty repair. It was returned to me unrepaired because it was not a product they built and had no replacement parts for it!
Read more
28 people found this helpful
Helpful
Report abuse

R
3.0 out of 5 stars 3 stars for a 5 star reel
Reviewed in the United States on July 14, 2019
Verified Purchase
The lightness of this reel is really something to behold along with the fine mechanical workings makes it worth the money in my opinion. On the the down side I'm having a lot of difficulty getting used to not having an anti-reverse switch. No anti-reverse, really? Why? This is an expensive reel at least give me an anti-reverse switch. A few years ago reel manufacturers started to not include an extra spool, now the anti-reverse has gone by the wayside yet reel prices continue to rise while customers get less. On a $25 reel getting rid on the anti-reverse switch may be understandable but it is inexcusable on a reel that costs $225. I expected more from Shamano. Sad!
Read more
20 people found this helpful
Helpful
Report abuse

Amazon Customer
5.0 out of 5 stars Been using for over a year still going strong.
Reviewed in the United States on August 26, 2018
Verified Purchase
Purchased in June 2017 for strictly inshore saltwater striped bass fishing. (4000 size) this is on my light tackle setup ( 7’ St Croix) mainly for schoolie size fish. It is extremely smooth and powerful for the size. Have caught keeper size on this reel with no problem.

I have also fully submerged it in salt water for about 5 mins. (Long story and not on purpose) The reel was completely fine. Cant say enough good things about this reel after heavy use over the last year. 🤘🏼
Read more
21 people found this helpful
Helpful
Report abuse

Dr. R
5.0 out of 5 stars Shimano Stradic C14 -Best Spinning Reel Hands Down!!
Reviewed in the United States on May 1, 2018
Verified Purchase
After researching what was the best Spinning Reel for 2018 specifically for Trout fishing, the Shimano Stradic C14 is hands down the best reel that I have bought. You will not be disappointed, The casting and retrieve rate is awesome! Went fishing yesterday and no problem on hauling in 20"+ Texas Sea Trout!
Well worth the money spent! You will NOT be disappointed...... Would recommend to a friend.
Read more
16 people found this helpful
Helpful
Report abuse

Thomas F. Ogle
5.0 out of 5 stars Love this reel!
Reviewed in the United States on August 4, 2017
Color: BlackSize: 1000HG FBVerified Purchase
I love this reel. I have five of them and a Stradic 2500. I never have line twist! Very smooth and strong drag. I've landed a number of bass in the 4-5 pound class, some even wrapped in weeds, no problem. I use on ultralight, light and even medium rods for bass fishing. I'm mostly fineness fishing, so line capacity is not an issue. If it is I switch to the 2500. I'm 74 and really appreciate their weight at 5.4 oz for all-day fishing. You might find a quality reel for less than $220 but you won't find one weighing 5.4 oz---at least I haven't.
Read more
18 people found this helpful
Helpful
Report abuse

D. Mackie
5.0 out of 5 stars Great Reel, super smooth with plenty of power.
Reviewed in the United States on June 19, 2018
Verified Purchase
Casts a mile (Well not really a mile, but a very long distance...), buttery smooth for reel and drag. Yes they are not cheap, but this is a really nice reel. I have two (2500s) and they are both on St. Croix Legend Bass rods (Plastic & Ned Rig). Also used for skipping docks on occasion on . I have a lot of Abu and Shimano spinning reels and this is by far my favorite to use.
Read more
6 people found this helpful
Helpful
Report abuse
See all reviews

Conner mackenzie
5.0 out of 5 stars Faaaash ken
Reviewed in the United Kingdom on July 15, 2020
Verified Purchase
Searched for the best spinning reel and this came up a couple of times, looks good on the 9ft whisker
Quite expensive considering I’ve nae caught a sausage! But at least I look the business 👍
Read more
One person found this helpful
Report abuse

Cliente Amazon
5.0 out of 5 stars Incredible reel for shore casting
Reviewed in the United Kingdom on December 12, 2019
Verified Purchase
Though I initially had to return the product because I received the wrong one, once I had the actual reel in my hands, it has performed very well. Running very smoothly with braid.
Read more
Report abuse

Mahmut ayaz
5.0 out of 5 stars Very light
Reviewed in the United Kingdom on August 6, 2017
Verified Purchase
It is very nice thanks
Read more
Report abuse

Amazon Customer
5.0 out of 5 stars Five Stars
Reviewed in the United Kingdom on January 9, 2017
Verified Purchase
Excellent! I bought this as a present for my boyfriend and he is very satisfy.
Read more
Report abuse
See all reviews

Page 1 of 1 Start overPage 1 of 1
Previous page
Next page
Pages with related products. See and discover other items: jigging reels, Best Rated in Fishing Reels
Back to top
Get to Know Us
Make Money with Us
Amazon Payment Products
Let Us Help You
EnglishChoose a language for shopping. United StatesChoose a country/region for shopping.
© 1996-2021, Amazon.com, Inc. or its affiliates