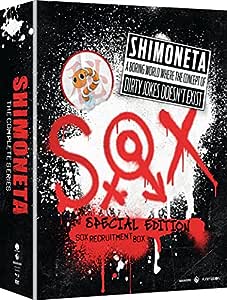 Shimoneta: A Boring World Where the Concept of Dirty Jokes Doesn't Exist - The Complete Series [Blu-ray]

Tanukichi Okuma is the son of an imprisoned ero-terrorist. Rather than following in his father's footsteps, he plans to stay on the track of morality and wholesomeness. Just like his dream girl, Anna Nishikinomiya, he attends Japan's most moral school. But after an encounter with Blue Snow, his virtuous plans are ****** and he finds himself entangled with SOX. Will the pursuit of smut tarnish what hope he has with the pure Anna, or will he *** around, stimulated by the panty wearing deviant and her filthy mouth?

SOX sticker - Share SOX with the masses!
1 Tube Sock - You know why.
Pin - Show off our adorable mascot!
Pin - Rock out with SOX out!

4.8 out of 5 stars
4.8 out of 5
390 global ratings
How are ratings calculated?
To calculate the overall star rating and percentage breakdown by star, we don’t use a simple average. Instead, our system considers things like how recent a review is and if the reviewer bought the item on Amazon. It also analyzes reviews to verify trustworthiness.

Before I get into my review I just wanted to say this: If you haven't watched this then DO NOT buy it. Go watch some clips of it or watch an episode a lot of places out there online where you can watch a couple episodes for free and without having to stream, do that get a feel for it then if you like it buy it. Literally all the negative reviews on here are from people who bought this before watching it. It makes absolutely no sense to buy a DVD set of a show you haven't watched before.

Now back to my review: This show is hands down the funniest and cutest anime i've ever watched, it has me dying laughing and always puts me in a good mood. As another reviewer said it's a lot like family guy and other adult cartoons. It's fan service heavy obviously but not in the typical sense it's a comedy and has a lot of heart in it. The only thing bad about it is that it's so short only 12 episodes but supposedly they're going to be making a 2nd season (praying they do 😩❤️)

Also a couple of details: This set comes with 2 DVDs and a digital copy of the series from Funimation (tbh i'm not really sure what the point of a digital copy is especially when you have the actual DVDs, everytime I get one I never use it so I kinda think it's pointless but you could always give it away or I guess it'd be good if you traveled) The first DVD has 1-9 episodes and the second has 10-12 episodes. There's also some extras but they really suck. Just some commentary, commercials for the show and some bs where "mom's" watch clips of the show... on paper it sounds funny but I promise you it's not. Just a bunch of backwards women who don't even know how to put on headphones supposedly, it seems really scripted tbh. So nothing special in the extras. Would've been really dope if they added better stuff in the extras tho.

So all in all i'm happy with my purchase 👍🏼 it's a perfect anime to me anyways but as I said before you need to watch it yourself, don't go by reviews or what anyone else says. It's not worth spending money on something you may or may not like.
Read more
15 people found this helpful
Helpful
Comment Report abuse

- Synopsis: The emphasis of this anime is that society reaches a state of strong moral discipline by attempting to cleanse anything regarded as perverted. When you think about it, that doesn't sound so bad on paper, since society is always trying to improve themselves in various ways that they can. Such as cracking down on crime. However, as the saying goes: The path to hell is paved with good intentions. As such there will always be those unwillingly to let go, which generates factions of opposition. This anime portrays the daily lives of these students as they explore the concepts of perversion and sexuality.

- Analysis: This anime also addresses an interesting complication as a result of such a world: People will be ignorant to various notions such as the process of how human babies are brought into the world. As the anime Kenzen Robo Daimidaler emphasized, perverted acts aren't necessarily evil as it is essential for things such as increasing the population. Of course, some order is necessary.
Curiosity is also a problem in of itself. If a person is told not to do something, chances are: they will probably do it out of curiosity or defiance. For example: To push the big, red button, or to not push the button. That is the question (curiosity killed the cat). Just saying...

- Features: English and Japanese audio with English subtitles. Refer to my low-quality PS Vita pictures as a reference. There's 12 episodes on 2 Blu-rays, and 12 episodes on 2 DVDs, for a total of 4 discs. Run-time is about 5 hours long. Rated TV-MA for sexual innuendo, strong sexual content, and some nudity.

Jonathan Blue
5.0 out of 5 stars Dirty jokes and anime, what’s not to love.
Reviewed in the United States on January 16, 2019
Verified Purchase
This is (in my opinion) a fantastic anime series, I’m kinda sad it was so short but whatever. Maybe it’s cause I too love dirty jokes lol. The clip I added was just a taste of what to expect in this anime, so no spoilers but so not for little kids. Also their is of course lots of fan service (gets close to hentai) so also be careful who you watch this with, might get a bit uncomfortable or not depending on you lol. I haven’t watch the sub version of this but I really do enjoy the dub, they do they great job (also see the clip). Plus this came with special features like moms watching shimoneta which was pretty fun, wish more funimation anime’s did this. Trust me if you like panty and stocking or dirty jokes you will enjoy this anime.
Read more
11 people found this helpful
Helpful
Comment Report abuse

ZenDodge69
4.0 out of 5 stars A review of the discs (not the series)
Reviewed in the United States on December 31, 2017
Verified Purchase
The blu-ray discs are fine the colours are fine and the sound is good, although I am disappointed that the Japanese audio is only stereo. I watched this series on an anime site and it was censored, both video and audio, on these discs the audio, the video, and the subtitles are uncensored, except for some self-censorship that was probably in the original anime, Episodes 1-9 are on the first disc, and 10-12 are on the second disc along with the extras, which were nothing special for me, and there are 10-14 versions of the Opening and Closing songs.
Read more
18 people found this helpful
Helpful
Comment Report abuse

Keith
5.0 out of 5 stars The Dirtiest Anime I've Ever Seen... I love it!
Reviewed in the United States on April 1, 2020
Verified Purchase
I laughed my @$$ off. One character is nearly nude and flashing people and there is nothing to be seen, but later another character has a nearly pornographic scene. This anime has the most perverted girl I've ever seen in an anime, who may or may not be a rapist. There is nothing to be prepared for and it finds ways to not be predicted. It's super weird, but I cannot stress how funny it was to me. It's a world where perverted jokes are considered terrorism.
Read more
2 people found this helpful
Helpful
Comment Report abuse
See all reviews

Sebastian7918
5.0 out of 5 stars Great show!
Reviewed in the United Kingdom on November 26, 2019
Verified Purchase
This is a great anime for everybody who loves dirty jokes and has a dirty mind!
Read more
Report abuse

Dvac
5.0 out of 5 stars Censorship with a point.
Reviewed in Canada on August 1, 2019
Verified Purchase
This, is a gem.

The bad, this is not for everyone. Ome people will be offended by the opening alone. Finishing with the glorious war cry of "c*ck and b*alls". If that alone turns you away, this is will not be your kind of anime. So If you are a prude and have an adversity too the offensive juvenile humot avoid this product.

The ugly, if your sense of humor is that of a teenager where potty humor makes you laugh. This is amazing fun. Well animated, censored for your amusement and leabes you wanting more.

The good, as much as it is juvenile potty humor run amuck. the censorship of the show is as much a commentary as the distopian puritan fictional society is. Seeing as japan has very private, yet is open minded upon personal proclivities of the bed room. This paints a very interesting picture.

It is one of my favorite guilty pleasures of modern anime.
Read more
Report abuse

Amazon Customer
5.0 out of 5 stars No place for dirty Jokes, naughty images and a foul mouth.
Reviewed in Canada on March 15, 2019
Verified Purchase
This anime is where dirty jokes don't exist.
She is a mysterious Blue Snow that stir up trubble.
She ware her pantie to hide her face while armed with naughty images and a foul mouth.
Read more
Report abuse

You seriously have to watch this to believe what goes on.
Oh and if you don't believe me, I have three words for you to some up the crazy: Chocolate Chip Cookies....

Yeah...some of you are googling that right now....
Read more
Report abuse
See all reviews