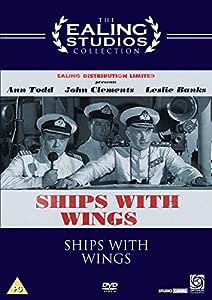 United Kingdom released, PAL/Region 2 DVD: it WILL NOT play on standard US DVD player. You need multi-region PAL/NTSC DVD player to view it in USA/Canada: LANGUAGES: English ( Dolby Digital 2.0 ), SPECIAL FEATURES: Black & White, Booklet, Interactive Menu, Scene Access, SYNOPSIS: Lt. Dick Stacey is dismissed from the Fleet Air Arm for poor discipline. He joins the Aircraft Carrier 'HMS Ark Royal' (The Ship with Wings). When they go into battle in the Mediterranean he acts heroically and redeems himself. ...Ships with Wings

Bobzep
3.0 out of 5 stars REMARKABLE EFFECTS SAVE THE FILM
Reviewed in the United States on April 2, 2019
Verified Purchase
Ealing Studios' effects technicians really earned their rations working on this 1941 film.
Aircraft and ship miniatures are easily discerned as small-scale, but most models are well detailed and imaginatively shot. In some scenes they look as bad as Universal's war film efforts and at their best resemble Republic's.
The quality of the print is first-rate, and looks first generation.
They story is unrealistic, but the SFX work is worth the $5 DVD cost at Amazon.

An interesting story, good special effects effects done with models.
My only disappointment, is the disc is a burned DVD-R, not a pressed DVD.
The picture and sound quality were excellent.
Read more
Helpful
Comment Report abuse

Jeff
2.0 out of 5 stars Looking for a good old flying movie? Keep looking...
Reviewed in the United States on March 10, 2016
Verified Purchase
This is a "B" movie by 1941 standards. Need I say more? Keep reading if I do. No expense was spared as long as it didn't cost more than £2.00. Yes it is a British movie, but I suspect Great Britian would prefer to keep that tidbit secret.

The cockpit scenes were often pilot and passengers sitting in chairs with the instrument panel just out of sight.

To be fair there are fleeting glimpses of the aircraft carrier Ark Royal. However, at the time of filming she was fighting a war. I assume there was no time to shoot scenes onboard, other than a couple of take-offs and landings.
Read more
Helpful
Comment Report abuse

MattyMatt
3.0 out of 5 stars Unique perspective on early Fleet Air Arm opps
Reviewed in the United States on October 28, 2020
Verified Purchase
Kind of a silly story, but for old aviation history buffs like myself, the visuals of old, lesser known British naval aircraft are fun to see. I doubt the Fairey ROC plane has such a prominent role in any other movie. Good-o!
Read more
Helpful
Comment Report abuse
See all reviews

C. C.
5.0 out of 5 stars Ships with Wings - lesson for our times and in film craft
Reviewed in the United Kingdom on September 15, 2010
Verified Purchase
"Ships with Wings" an Ealing Studios fictional warfilm and is made in close cooperation with the Admiraltyand War Office advice for public morale; copyright 1941 a black and white film made just under 3years into WWll.

It opens with a Captain & and an Admiral at a launch for an aircraft carrier and the reparte between them. The Admiral is sceptical and the Captain enthusiastic, seeing the potential of aircraft at sea, hence title of the film. Well structured dialogue and informative of an argument contemporeanous to the time, over where the budget got spent. 3million for an aircraft carrier! Wow inflation ...sure the RN would like a bill these days that small.

It is a somewhat 'suspend belief' on the overall storyline, but it is only the peg to hang some fine model making and film footage of real ships; a morale boosting movie for the wartime audience and some great one-liners.

A carefully crafted story for and of its time; patriotic theme music and some short and light singing performances seamlessly slotted in with relevance to the scenes with John Clements as Lt Stacey and Ann Todd as an actress dating Lt. Stacey who is a Fleet Air Arm pilot.

Gentle properganda for the purpose of national confidence building in the fight against the enemy laying out the new aircraft carrier benefits, along with indications of duty and selfless courage. Not over done and the writers sensitively give a balance of what would be acceptable and comforting to the audiences, who by that time in 1941 would be effected personally by the casualities and death toll of the war and would be in no mood to swallow glazed patriotism.

Even the moral example of the 'best pilot' Lt Stacey who is court martialled for disobeying orders and cowardice is drummed out of RN. (War is serious and so is the Senior Service - not about dare devils)Then the storyline begins, he ends up flying a 1 plane route in the med for a Greek owner, the germans invade the island and naturally, both ex Lt Stracey and the greek owner do their duty for their country and the allies. (Watch out for the very moving speech of resistance the greek makes to the Germans).

Great model shots of the Italian and German base planes and the dam which the RN have to destroy. Great ship and flying film footage mixed in with set and model shots - rather slick for the technology and time.

A wonderfully crafted film that is a lesson in model making for film and splicing of film footage expert craftsmanship. It is obviously a piece of mass media history and social history of film making, as the spec for the writers, must have in wartime, read something like:

Good storyline
good dialogue with wit
glamour
love interest
Best foot forward for the RN
morale booster for the nation
moral sensibility of wartime duty
respectful acknowledgement of the fallen and the audience who have lost
someone who made the ultimate sacrifice.

Wonderful bookmarker for how times and manners have changed and not for the better.
Read more
38 people found this helpful
Report abuse

RevdRMBWest
3.0 out of 5 stars Interesting.
Reviewed in the United Kingdom on November 25, 2018
Verified Purchase
This is a film which is a bit corny in places but is good entertainment, and with some really good shots of the ships and aircraft involved at the time.
Read more
One person found this helpful
Report abuse

Brian blighe
2.0 out of 5 stars poor acting and unlikely action
Reviewed in the United Kingdom on May 8, 2015
Verified Purchase
Not an exciting film, poor acting and unlikely action, too much involvement of the officer class that I found annoying.Nevertheless it contained
interesting footage of the aircraft carriers and Fleet Air Arm planes of the era.
Read more
4 people found this helpful
Report abuse

Eifion R. Howells
5.0 out of 5 stars Propaganda.
Reviewed in the United Kingdom on February 3, 2014
Verified Purchase
I should say this is a terrible film, but it is also wonderful. Made during WWII when there was no such thing as CGI it IS a bit..... naff. But it is great propaganda.
Read more
4 people found this helpful
Report abuse
See all reviews