You've subscribed to Shirley Link! We will preorder your items within 24 hours of when they become available. When new books are released, we'll charge your default payment method for the lowest price available during the pre-order period.
Update your device or payment method, cancel individual pre-orders or your subscription at
Your Memberships & Subscriptions
There was an error. We were unable to process your subscription due to an error. Please refresh and try again. 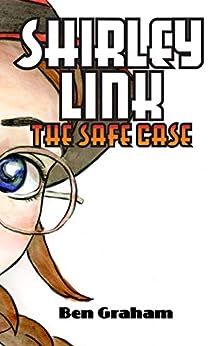 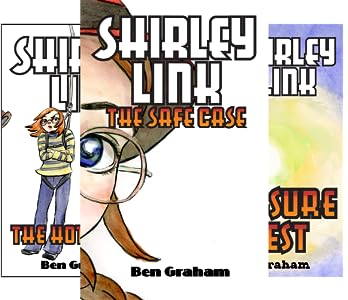 "Shirley Link is a new girl detective series that my daughter is crazy about. This is an amazing series, my friends! Your kids will be hooked and you'll feel really good about it." - Parents.com
"This Veronica Mars for the tween-set is funny, smart, and full of preternatural wisdom. A 13 year old gumshoe with crazy perception skills, Shirley Link sets out to solve the mystery of a missing school safe while at the same time juggling jealous best friends, boys, and homework. She does this with aplomb and the occasional, hilarious zinger." - Edward Hemingway, Author, Bad Apple

Shirley Link, a Mystery series for kids 8-12 years old, has been my focus since 2012. Shirley's fun because she knows what she's doing. There's no stumbling across victory. She plans eight moves ahead. I could write her forever, and plan to.

I live in Massachusetts, surrounded by the Forbidden Forest, with my wife and son. I started teaching classes in digital publishing and marketing at New York's School of Visual Arts MFA Visual Narrative program in 2015.

4.3 out of 5 stars
4.3 out of 5
180 global ratings
How are ratings calculated?
To calculate the overall star rating and percentage breakdown by star, we don’t use a simple average. Instead, our system considers things like how recent a review is and if the reviewer bought the item on Amazon. It also analyzes reviews to verify trustworthiness.
Top reviews

Gabriel Legend
3.0 out of 5 stars Mediocre Middle-Grade Mystery
Reviewed in the United States on July 12, 2017
Verified Purchase
Books that I read (especially Kindle self-published books) can be divided into two broad categories: books that I was able to finish and books that I had to discard somewhere in the first few chapters. While this book fell into the former category, it was a close call.

The main issue was that Shirley just wasn't likable. She was vain, preening and had no redeeming qualities to balance those things out. Her two "assistants. I mean, friends," were little more than her personal studio audience, marveling at her crime-solving abilities and applauding like sycophantic puppets at every little thing she did. In addition, the other characters acted unrealistically, enlisting a kid to help them solve a potentially dangerous crime, especially one that needed to be kept secret and that the police were already working on. Of course, Shirley already knew about the secret stash of money, and why not; she knew everything else there was to know.

The plot was also flimsy. There was no mention of checking security cameras, and the internet was used as a font of endless information, telling Shirley not only that her principal was having financial problems (seriously? she gets emailed whenever someone files for bankruptcy?), that the librarian's house was in foreclosure and that the assistant principal was independently wealthy. Sorry, but it doesn't work like that. There were no clues, no following the clues and none of those magic moments when the main character figures something out and the reader goes back and reads the last few scenes trying to do the same. The Three Investigators mystery series was a master of this.

However, there is no denying that Mr. Zackheim has talent and hopefully, I will try another mystery series by him in the near future that satisfies me like a good middle-grade mystery should.

PACole
5.0 out of 5 stars Shirley is the Link to solving the case of the principal's missing safe.
Reviewed in the United States on May 26, 2015
Verified Purchase
Ben Zackheim's middle grade novel, “Shirley Link & the Safe Case,” is a quick read that holds your interest. Shirley Link is an 8th grader who has definite crime solving skills. She isn’t shy about claiming her detective talents and uses her skills for good. In this story, a huge safe is stolen from the principal’s office with $30,000 saved for a new library. How the thief took the whole safe, when it wouldn’t even fit through the doorway is what Shirley has to figure out. The principal asks Shirley to clear his name and find out who took the money and how. And she does just that with the help of her friend, Wylie.

Mr. Zackheim introduces all of the characters in believable fashion and this detective story in a school setting moves along at a good pace. There’s humor and tongue in cheek. Kids will recognize their teachers, friends, and principals in the story. There are several more Shirley Link detective cases for kids to enjoy.

jls4
5.0 out of 5 stars Liked it better than I thought
Reviewed in the United States on May 1, 2017
Verified Purchase
Honestly, I didn't know what to think about this book. I download it on a whim and just decided to read it. I'm not sure what it was about the book that made it work for me, but it did. It was cute and even though I only read a chapter or so a night, I found myself looking forward to what was going to happen. I do wish the author had put a little bit more action in it and made the mystery a bit harder to solve, but overall I enjoyed it.
Read more
2 people found this helpful
Helpful
Report abuse

Along with her endearing personality, Shirley has an incredible eye for detail that is her strongest weapon. After all, it's the detail that always catches the crooks. Reading Shirley was easy. I felt the style flowed and the mystery was revealed at a good pace.

In a Nutshell | Shirley Link is a Miss Marple of the future, but perhaps not so old and stodgy. Although she has such great skills, I like that she remains grounded and kind.
Read more
One person found this helpful
Helpful
Report abuse

Kindle Customer
5.0 out of 5 stars Shirley Link - a very cute but intelligent detective
Reviewed in the United States on January 9, 2015
Verified Purchase
This is one of the cutest books I have read. Shirley Link is an instantly likable kid detective, who is very intelligent but a very normal teenager. She has this adorable couple of friends, Marie and Wylie, who like each other but do not accept it. Shirley, however, has her head strong on her shoulders, at least that is what she thinks.

There is absolutely nothing I did not like about this book. It is a really short book and would do wonders with kids. The concept is captivating and story is crisp without any scope of mind wandering. I would love to read more of Shirley and her friends. They are definitely here to stay.
Read more
One person found this helpful
Helpful
Report abuse

TA
5.0 out of 5 stars Great mystery for kids and teens
Reviewed in the United States on December 13, 2015
Verified Purchase
4.5*. This is a really amusing and cute story, especially for kids and young teens. I don't normally like present tense first, but it worked with this story.

There were a few editorial snags in this book, though, which were distracting, especially for its short length.

Shirley and her friends were likeable, and she reminds me of a younger Nancy Drew, which is the girl detective I grew up with. Over all, enjoyed! (I also now feel really old after reading this.)

Found this as a one click roulette read and I am glad I read this one!
Read more
2 people found this helpful
Helpful
Report abuse

Wild Ali
3.0 out of 5 stars This YA caper has a lot of heart!
Reviewed in the United States on December 31, 2014
Verified Purchase
This is a snappy little read, I've found. The young girl featured within is wise beyond her years, showing a snarky self-worth "know-it-all" kinda cockiness as she narrates most of her experience in first-person. Yes, it's mostly narrated from a flash back angle; she sorta walks you through the beats of her latest case here, and you immediately get her frame of mind, where she's coming from.

My only negative critique would be that she seems a little TOO wise beyond her years. Maybe it would be cool if she had more childlike moments, more flights of fancy? She's surely a braniac, yes. But she could still stand to think like a kid. At least in some moments.
Read more
2 people found this helpful
Helpful
Report abuse
See all reviews

iamEllie
4.0 out of 5 stars Brilliant!😁
Reviewed in the United Kingdom on February 5, 2016
Verified Purchase
This book is amazing!!!!!
It just takes me into the pages, and it' really exiting! I really want to read the next book!
I think young readers that like mysteries should read this.Brilliant😁
Read more
Report abuse

Kindle Customer
5.0 out of 5 stars Good read
Reviewed in the United Kingdom on October 27, 2017
Verified Purchase
I liked this book as it was heart thumping at parts and me, as a good reader, couldn't figure out who the culprit was.
Read more
Report abuse
See all reviews