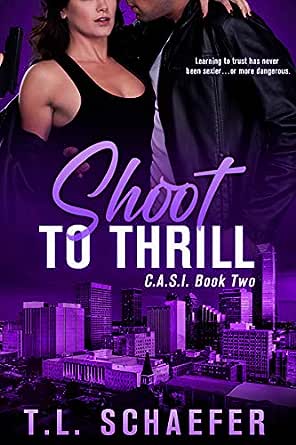 You've subscribed to CASI! We will preorder your items within 24 hours of when they become available. When new books are released, we'll charge your default payment method for the lowest price available during the pre-order period.
Update your device or payment method, cancel individual pre-orders or your subscription at
Your Memberships & Subscriptions
There was an error. We were unable to process your subscription due to an error. Please refresh and try again. 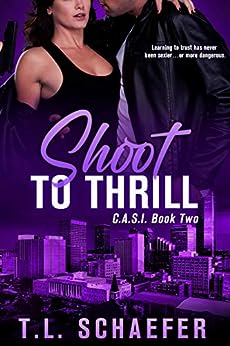 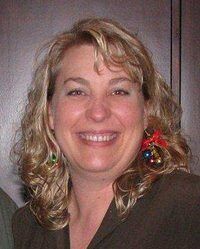 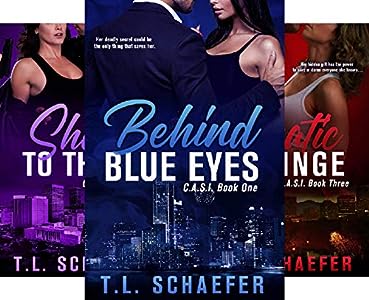 V. Ardito
VINE VOICE
5.0 out of 5 stars Thrills and romance in one big wallop
Reviewed in the United States on August 10, 2020
Verified Purchase
Special Agent Arin Thomas always gets her man. But when a mysterious tipster indicates the death of a well respected colleague was not what the FBI has claimed, she’ll go out on her own to find the truth and stumble into CASI, a school for individuals with unique talents. Jonah Summers is not just the headmaster, he’s one of those gifted individuals. And he’ll do whatever it takes to protect the school and its benefactor, a man with a great deal of wealth, power, and secrets.
I was thrilled to learn this book was available since I’d loved the first in the series, BEHIND BLUE EYES. Once again, TL Schaefer did not disappoint. Arin is a complex protagonist with a spotted past who may have met her match in Jonah, but the two will have to risk it all if they want to win in the end. I’ve already preordered Book 3. Highly recommend this riveting series!
Read more
Helpful
Report abuse

Rita J
4.0 out of 5 stars Mind Control plus More
Reviewed in the United States on February 1, 2021
Verified Purchase
Interesting concept with special talents in children who grew into adults. Some very dangerous others more able to hide in plain sight. The story stems around an FBI woman who never fit and determined to find out why her partner was killed. So worth the time to read and decide for yourself.
Read more
Helpful
Report abuse

Dee S. Knight, Erotic Romance author
5.0 out of 5 stars Engrossing Thriller, Drool-Worthy Romance
Reviewed in the United States on January 20, 2015
Verified Purchase
I really enjoyed Shoot to Thrill! Terri Schaefer has put together a mystery/thriller/secret agent story wrapped around a luscious romance. I liked Arin (heroine) a lot and liked Jonah (hero) even more. I would take a place on that hunky doctor’s couch any ol’ time. But I digress. I found both characters to be believable and felt for them as their backgrounds came more to light. I also found it hard to get home from work and have to sit through dinner and then wait for my sweetheart of a husband to go into the office to work so I could crack open the Kindle and see what was going to happen next. I recommend this book to anyone who enjoys an engrossing thriller with a great romance. Great job, Ms. Schaefer! I’m looking for more of the series now.
Read more
Helpful
Report abuse

Cathleen A. Cody
5.0 out of 5 stars Great Read!
Reviewed in the United States on October 4, 2020
Verified Purchase
Loved this book! The characters were well fleshed out, the plot had unexpected twists and turns, and the suspense/mystery/romance ratio was well done. If you like Nora Roberts or Linda Howard, you’ll like this series.
Read more
Helpful
Report abuse

V. Hudson
5.0 out of 5 stars Loved It!
Reviewed in the United States on April 13, 2015
Verified Purchase
I really loved this book!. I actually started with book 2 and now must get book 1 because it was so good! It has action, adventure, love and betrayal....along with paranormal powers...all you could want in a book!
Read more
Helpful
Report abuse

JenacideByBibliophile
5.0 out of 5 stars GREAT sequel to book 1!
Reviewed in the United States on April 25, 2016
Disclaimer: This book was sent to me by the author, T.L. Schaefer, for an honest review.

Opinion: So a few months back (probably a lot of months back) I did a review for Behind Blue Eyes which was book 1 in the CASI installment. Today I am back with the review for book 2, Shoot to Thrill, and OF COURSE TL Schaefer has NOT disappointed me in the slightest. From the writing and the well-thought plot, to the new characters and the romance, this author has once again gotten me hooked. In comparison to book 1, this story sticks with the CASI theme but follows a new female lead of the FBI named Special Agent Arin Thomas. In this story we dig deeper into the past of Wes Burke, and the children and employees at CASI from years prior. Do not fret however, we still get a little bit of the beloved characters Sara Covington and Brian Roney from book 1!

After working through a tragic and complicated past, Special Agent Arin Thomas has worked her way to being the best in her field. But the death of her former partner, Wes Burke, has left a yearning to find the truth about his death and to set things right. But when Arin starts snooping around, what she finds out about her former partner, and the school that he had been in as a child, puts her in immediate danger. As Arin becomes acquainted with Dr. Jonah Summers, the man who runs CASI, she starts to constantly fight off an overwhelming attraction to him. Not one to lose focus, Arin tries her best to keep her mind on not letting her or Jonah get killed; especially when she learns that it is Russian Special Forces that are after them. With the help of Sara Covington and Brian Roney, Arin must find out how Russia has become involved and who the person calling the shots is before it’s too late.

FIRSTLY, I must start with the romance. As I have rambled on to you all before, we all know I am NOT a big fan of the erotica and overly graphic mushy-mushy. I am somehow always finding an exception when it comes to TL Schaefer’s stories, partly because her writing is so awesome. If you are not a fan of erotica like me, not to worry. There are only two prominent “scenes” in this story that would make you uncomfortable, and you can easily skip over them without missing anything important. The reason I have started out saying this, is because the books are way too good to pass up because of the erotica. Trust me on this one.

Anyways! I am LOVING book 2 of CASI, and I cannot stress it enough. The writing makes me SO happy; it’s descriptive and creative, thoughtful and straightforward, witty and comical but also stressful all at once. The author really knows how to write a thriller and keep the reader interested, which lead me to not being able to walk away from this story. I love that this stays with the same general idea of book 1, but introduces new characters and conflicts. Arin Thomas is another great example of a fierce and strong female character. She doesn’t take any crap and has that same hilarious snarky attitude that Sara Covington possessed in book 1. There is honestly nothing better than a badass female who plays just as hard as the men do, and who doesn’t ever want to let them win.

“I could be pissy about him becoming overtly, pig male, but decided on the coldly-competent route I’d psyched myself into this morning. I could be professional in a swimsuit, damn it. I tucked my piece into the holster stashed in my carryall, pushed up from the lounge chair and lulled on the bikini’s matching skirt.”

This story digs deeper into the background of CASI and also touches on a lot of the aftermath effects of the institution. There is a lot of detail and thinking that has gone into these characters trying to find out “who-done-it”, and I think all of the evidence and clues were compiled fantastically. Granted, I couldn’t figure it out for the life of me. I am glad that the author reintroduced us to Sarah and Brian from book 1, I thought these were fantastic characters before so I am glad to have been reunited with them. I am not quite sure if there will be a book 3, but one can only hope that there will be! I HIGHLY recommend these books to any reader who is looking for a great thriller or mystery with an amazing story-line.
Read more
Helpful
Report abuse

Charles A. Ray
VINE VOICE
5.0 out of 5 stars Shoot, this was a thrill!
Reviewed in the United States on January 7, 2015
After having made a fortune on Wall Street, Arin Thomas became an FBI agent in order to avenge the murder of her younger sister, Bianca. Not exactly a people person, Thomas becomes the FBI’s cold case expert. She faces one of her toughest cases when she gets a tip that the death of her former partner, Wes Burke, was not exactly as reported.
In T. L. Schaefer’s Shoot to Thrill, we take a dizzying ride along with Thomas as she looks into the enigmatic Colorado Academy for Superior Intellect (CASI) and its equally mysterious head, Jonah Summers. The deeper she digs, the more murky things become – and the greater the threat to her life.
I received a free copy of Shoot to Thrill in exchange for an objective review, and have to say, I thoroughly enjoyed it. Schaefer masterfully sucks you into Arin Thomas’s life, switching back and forth between the past and the present as she builds the suspense layer upon layer, leading to an explosive, but imminently satisfying conclusion.
Read more
2 people found this helpful
Helpful
Report abuse
See all reviews