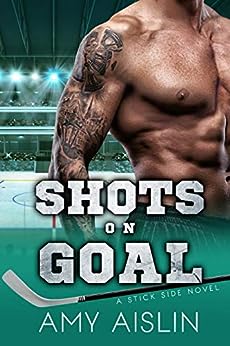 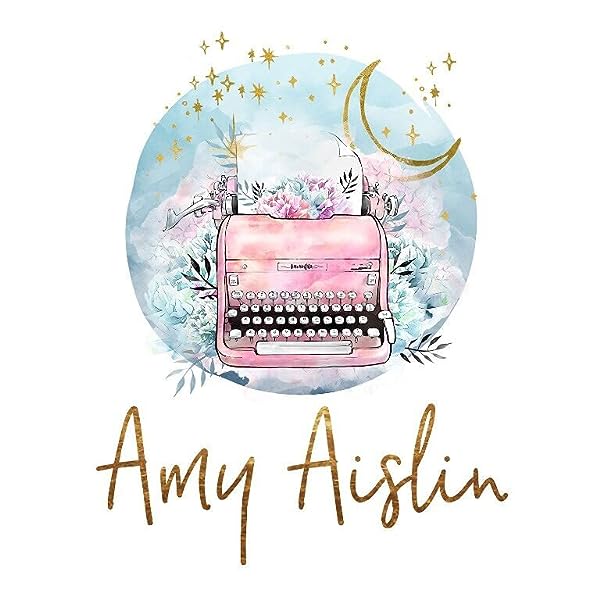 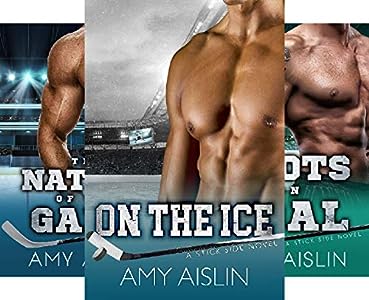 "With lots of hockey, delicious food, and the sweetest couple ever, Amy Aislin scores a hat trick with Shots on Goal." -- Kelly Jensen, award-winning author of Block and Strike
"Shots on Goal is a great wintertime read. Like a warm blanket and a mug of hot chocolate! Huddle up by the fire and enjoy this cozy story!" -- Allison Temple, author of The Seacroft Stories series

4.4 out of 5 stars
4.4 out of 5
140 global ratings
How are ratings calculated?
To calculate the overall star rating and percentage breakdown by star, we don’t use a simple average. Instead, our system considers things like how recent a review is and if the reviewer bought the item on Amazon. It also analyzes reviews to verify trustworthiness.
Top reviews

Reflections of a Swede
4.0 out of 5 stars Beautiful slow-burn romance
Reviewed in the United States on May 3, 2020
Verified Purchase
Shots on Goal is a hockey romance of the M/M, jock-meets-nerd variety – which I love. And I thought I knew exactly what I’d be getting with this read. I chose it more or less as a comfort read; a familiar storyline of closeted athlete meets out-and-proud, sprinkled with angst and s*xytimes followed by a happily ever after. And in a sense, that is the gist of the story, but it was a bit more than that.

This is actually the third installment in the Stick Side series. And no, I haven’t read the two previous ones. Shots on Goal works as a stand-alone. Though I must admit, in the beginning it was a bit of a challenge to keep some of the names and characters straight – even though they weren’t (Sorry, couldn’t help myself there).

This is a true slow-burn romance. So, if you’re looking for fast and furious, look elsewhere. The tentative development of Roman’s and Cody’s relationship is slow going. They become friends, long before they become anything more. But the portrayal of Roman’s struggle to trust again, Cody’s insecurities and their gradual, growing affection is totally engaging.

After a very heartbreaking prologue, I had a bit of trouble getting into the story though. The slow pace took some getting used to. But I’m so glad I stuck it out. Because I really liked this read. I hadn’t meant to pick up such a romance-y romance, but I’m so glad I did. It’s beautiful and so well written. And there’s a hopeful undertone throughout the story implying that no, humanity might not be a totally f****d up race after all. Also, my very heterosexual, ignorant self got a bit educated which is also a bonus. I hadn’t heard the term demisexual before and I most certainly didn’t know what it meant. I do now though.
Read more
3 people found this helpful
Helpful
Report abuse

Fanni
4.0 out of 5 stars Solid four stars becuase it was a lovely story.
Reviewed in the United States on February 21, 2021
Verified Purchase
How to describe this one? Truly sweet. That's the perfect phrase.

Shots on Goal is the third book in Amy Aislin's Stick Side series.

This one telling the sweet story of Cody and Roman.

These two characters made their separate appearences in the first two books. Cody as Mitch's best friend and Roman as Alex and Ash's rude teammate.

Roman gets traded to a new NHL team in Vermont where he is roped into volunteering at the Glen Hill Library to read tales to kids.
The library where Cody happens to be a part time worker.

They meet and Cody sees something in Roman that he let noone see before. That he is lost and his grumpy exterior is just a defense against getting hurt.

The Story:
It was a lovely, easy stroy about two guys with thier separate issues findig something extraordinary with the other. Roman trying to fit in with his new team and Cody trying his best to save his local library.
Nothing extra really happens, pretty low in angst but it was refreshing and made me smile which is a really good thing in a book.

The Chracters:
Cody has daddy issues as his father is career military and he rarely saw him growing up. Because of that he has a fear of getting left behind by the ones he loves. This causes a littly dilemma for him when he applies to grad school in a different state.
Roman had a pretty rough experience in high school when he was outed and needed to survive the consequences. He mistrusts everyone and fears to open up. That costs him 8 years and almost an opportunity whith the kind, lively student.
I was kind of heartbroken because his story is just so tragic.

But they, of course, manage to make the other realise that something or rather someone is worth putting yourself out there.

Rhonda
5.0 out of 5 stars I've read it twice, so it gets 5 stars
Reviewed in the United States on January 7, 2020
Verified Purchase
I loved the focus on Cody, learning more about him after seeing him in the previous books. I thought it was interesting that his experience as Mitch’s friend allowed him to see past Roman’s mask. The book also fills in a bit of Mitch and Alex’s timeline which I enjoyed.

I was intrigued by the brief discussion about romantic attraction and sexual attraction.

I did think that the author had Cody expecting the impossible from his father, given his father was career military, which therefore didn’t seem realistic for a military child, even if he didn’t move around.

Another great entry in the series! I was given an ARC but bought my own copy anyway.
Read more
One person found this helpful
Helpful
Report abuse

Kate H.
5.0 out of 5 stars Another Satisfying Read
Reviewed in the United States on August 30, 2020
Verified Purchase
I have had this book in my TBR pile for awhile now and have no idea why I waited this long to read it. Seriously, I loved it. I was familiar with the MC’s from the previous books in this series, but it can be read as a stand-alone. Cody was the perfect match for Roman. I loved seeing them both open up to each other, despite being afraid of rejection. And it was great to see the progression of the relationships from the background characters as well. The story drew me in and held my attention until the very satisfying end ❤️.
Read more
Helpful
Report abuse

jbsets
5.0 out of 5 stars Read the Whole Series
Reviewed in the United States on September 17, 2020
Verified Purchase
I am not going to give you a run down on the story and characters. You need to read the book. I always love me a good hockey story and this is a good one. I hate writing reviews about a single book from a series. In most cases reading just one book or a series out of order makes it hard to follow everything. I just prefer series that include past characters as well as foreshadowing for future story lines. You can read these as stand alone and be okay. As an aside, the tip about the blast of cold water at the end of your shower to ease itchy skin WORKS. I figured I would give it a try. If Amy reads these, we need a book about the guys with the skin care line. We need their story! ; )
Read more
Helpful
Report abuse

Lyndsay TC
5.0 out of 5 stars Cody and Roman
Reviewed in the United States on August 29, 2020
Verified Purchase
I was so excited to get Roman's story after getting Dan's point of view of him in The Nature of the Game. It was kind of perfect that he ended up with Cody who you couldn't help but fall in love with in On the Ice. This was a fade to black book which typically I skip however the story that was woven was absolutely perfect and I found I didn't need the hot scenes that I love. This hockey series is fun and sweet and lovable.
Read more
Helpful
Report abuse

Sara
4.0 out of 5 stars All the feels
Reviewed in the United States on September 11, 2020
Verified Purchase
Sweet, cute romance between a hockey player and a librarian-a pairing I can’t recall reading before. The passion Cody has for the library was fun to read. I do prefer a bit more steam from my reads, like Rachel Reid or Avon Gale’s hockey romances, but there was so much heart and emotion around Roman’s background that I didn’t miss it too much.
Read more
Helpful
Report abuse
See all reviews

Julia Smith
5.0 out of 5 stars Wonderful
Reviewed in the United Kingdom on November 6, 2020
Verified Purchase
This was a well written, wonderful & romantic story between a tough on the outside, goo on the inside hockey player & a happy psychologist college student. Add in a library to save & you have a very good book. 😊Xx
Read more
Report abuse
See all reviews