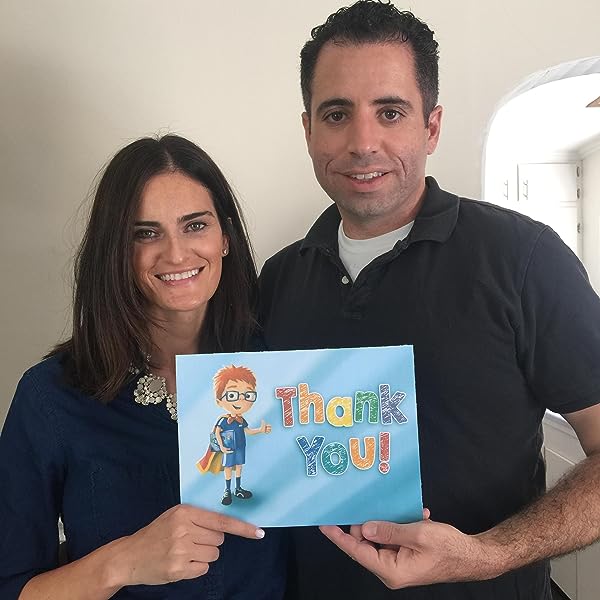 What Should Darla Do? Featuring the Power to Choose Hardcover – Illustrated, November 26, 2019

I do not believe there is a better book out there for girls. It is extremely empowering, enabling girls to dream big and teaching them to work hard for their dreams. Simultaneously, it is very "girly," allowing girls to be themselves and continue to love playing with dolls, paint, bake, and all the other fun things girls love to do. The other books I've read to my daughter lean hard to one side or the other, but this book walks the line perfectly, giving girls a strong yet feminine role model they can aspire to be! --Maya Shanun - Pediatrician and Mother of 5

My daughters and I are gaga over the Darla book! The colors and illustrations! I love the way the mother connects with Darla throughout and allows things to play out so that Darla can learn. We've read through several scenarios and it is beautifully written. Top notch! --Ralphie Jacobs - @simplyonpurpose

I loved the Danny books, but this Darla book takes it to another level. The stories are relatable and well written, and the illustrations are just perfect. I can't think of a better children's book out there. --Efrat Ziegel - Attorney and Mother of 3

Ganit & Adir Levy are passionate about inspiring children to reach their potential. Ganit is a former teacher, and Adir is an entrepreneurial astrophysics junkie. Together they write books that empower kids with the understanding that their choices will shape their days, and ultimately their lives, into what they will be.
Tell the Publisher!
I'd like to read this book on Kindle

4.8 out of 5 stars
4.8 out of 5
1,117 customer ratings
How does Amazon calculate star ratings?
Amazon calculates a product’s star ratings based on a machine learned model instead of a raw data average. The model takes into account factors including the age of a rating, whether the ratings are from verified purchasers, and factors that establish reviewer trustworthiness.

Jennifer M. Gilles
5.0 out of 5 stars Double Thumbs Up!!!
Reviewed in the United States on November 27, 2019
Verified Purchase
Once again, Ganit and Adir Levy have knocked it out of the park!! What Should Darla Do? is a fantastic book and I know the kiddos at school will love Darla as much as they have loved Danny in the What Should Danny Do? series. Darla, like her cousin Danny, has the amazing Power To Choose whether or not her day will be filled with positive interactions. This book is perfect when educating children on aspects of social emotional learning such as recognition of feelings, reactions to those feelings, emotional triggers and much more. I highly recommend buying this book to share with the young people in your life!
Read more
67 people found this helpful
Helpful
Comment Report abuse

KellyAustin
4.0 out of 5 stars Awesome book for kids with siblings
Reviewed in the United States on December 1, 2019
Verified Purchase
We love the series “What would Danny do?” so much that we bought this book for our niece. It’s a great book, however, it features a girl with two siblings. Since our niece is an only child, I didn’t find it right to give her this book. Hopefully the authors come out with the school edition, like Danny, so that it’s more focused on friends for those kiddos without siblings. But if you’ve got a couple of kids in tow, this book is awesome for helping teach the lessons of what makes a harmonious home!
Read more
63 people found this helpful
Helpful
Comment Report abuse

rfisw_09
3.0 out of 5 stars Regret Buying
Reviewed in the United States on May 15, 2020
Verified Purchase
I really wanted to like this book, or even love it, but after reading through it, I wish I hadn't bought it. We loved the Danny books so I thought this would be great too. I feel like there is a lot of "girl drama" in the different stories and not enough getting along or taking control of their emotions. For example, although Darla chooses to do something she shouldn't doesn't mean her choices dictate her sister's actions. Hannah is just as much responsible for her choices as Darla is. I felt everytime Darla had a bad day it ended with her feeling her sister was mean because of her choices. Hannah could have easily chosen to react to her sister's misbehavior in a more mature way, instead she lowered herself to her sister's poor behavior and they both just fight over and over again and they both end up having bad days. I teach my children that even if someone chooses to do something wrong or unkind to them, it doesn't mean it's okay to be unkind back. We can choose to react to the other person's poor behavior in a better way so we are not also choosing the wrong. In other words, two wrongs don't make a right. I also teach my children that no one else is responsible for their feelings and whether they have a good day or not. It helps when we are kind to each other, but sometimes people aren't kind and we need to learn to still find happiness in our lives despite unkindness. I also didn't like the reference to the friend looking like she peed her pants. I just don't like potty humor or children teasing each other whether they really peed their pants or not. That story could have been told differently in a more appropriate way. We also don't force our kids to share their toys. If they don't want the other playing with a toy that specifically belongs to them, than that is their decision. We feel this teaches them that they have control over their personal space and property. If they choose to not share a specific toy, I encourage them to find something else they can share or do together. I've hesitated leaving this review because I love the concept and I know not many share my point of view. I also don't want to offend the authors or others as I know it boils down to different parenting techniques and perspectives. I hope those who disagree can do so respectfully. If these things are a concern for you I highly suggest either avoiding this book or be prepared to discuss not only how Darla chooses to behave but also Hannah. This book may be best for children eight and older.
Read more
43 people found this helpful
Helpful
Comment Report abuse

Jennifer Cortright
5.0 out of 5 stars The series continues with an amazing book.!!!!!!!
Reviewed in the United States on November 27, 2019
Verified Purchase
What can I say!!!!! This book is a blessing. The authors have sure created a masterpiece. I am an elementary school teacher and I love reading the What Should Danny Do Books to my classes. The students have been waiting for this new book and i can’t wait to show them the colors Of the pages as well as Darla and her wonderful adventures. Thank you guy for this wonderful addition to the series.
Read more
43 people found this helpful
Helpful
Comment Report abuse

RM
5.0 out of 5 stars Really great book! Teaches Values, Decision Making, Consequences and Honesty A++ for all parents
Reviewed in the United States on December 18, 2019
Verified Purchase
Really enjoyed reading this book about 10 times (so far) to my kids. The first time my daughter decided to take the "Good Girl" path and make all the decisions I wanted her to make, but then the next few times around I asked her to do things that weren't very nice, and that (thank god she normally wouldn't do)..... It was great for her to immediately see how the story changed and the consequences of making bad decisions impacted her and those around her. I can't recommend this book enough. After they watch TV and are simply given a story and the result, this book gives the unique ability to make choices and see how the story changes based on the choice made. Really great book, HIGHLY recommended.
Read more
40 people found this helpful
Helpful
Comment Report abuse

Maggie Smith
5.0 out of 5 stars Amazing And Unique Children’s Book!
Reviewed in the United States on November 30, 2019
Verified Purchase
This book is AMAZING! Not only is it fun and interesting but the kids learn something new every time we read it. They love making the different choices and seeing where the story goes. It’s really unlike any other children’s book... other than What Should Danny Do? which got us hooked on these creative books. I’m so glad they came out with another book. Darla is a wonderful character who my kids can really relate to. The illustrations are stunning and captivate the kids and making your own choices to see how the story turns out is so much fun! Highly recommend this book!
Read more
27 people found this helpful
Helpful
Comment Report abuse

MamaBear3
5.0 out of 5 stars Love it!!
Reviewed in the United States on January 1, 2020
Verified Purchase
This book is so cute and perfect for my 6 year old. It’s just the right length for her to not feel overwhelmed but also long enough for a challenge. There’s multiple endings. Getting to choose what Darla would do and reading the outcome of the choice you made for her makes it so fun for kids. Will most likely be getting what should Danny do? Next - Would recommend!
Read more
23 people found this helpful
Helpful
Comment Report abuse

Amazon Customer
5.0 out of 5 stars ADORABLE, priceless addition to the Power to Choose Series, A Must Have!!!!!
Reviewed in the United States on December 21, 2019
Verified Purchase
My kids adored books 1 and 2 of "What should Danny Do?" from the Power to Choose Series, and fell in love with Danny, walking around with his P2C Cape. Ever since the authors announced that they would be releasing "What Should Darla Do?" my daughter (and I) have been anxiously awaiting it. If its at all possible, my daughter fell in love with Darla even more. Darla is a strong and ADORABLE character and the book is beautifully written and illustrated. Was certain the boys would not want to read it, but each of my kids thoroughly enjoy reading each of the story lines in this book as well (while I love that they're learning the benefits of being honest, kind, and much more) This book is fun, interactive and a must have for any boy and girl. Highly recommend!!!!!
Read more
21 people found this helpful
Helpful
Comment Report abuse
See all reviews from the United States